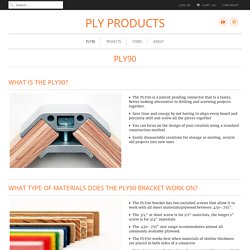 The PLY90 is a patent pending connector that is a faster, better looking alternative to drilling and screwing projects together.Save time and energy by not having to align every board and precisely drill and screw all the pieces togetherYou can focus on the design of your creation using a standard construction methodEasily disassemble creations for storage or moving, recycle old projects into new ones What type of materials does the PLY90 bracket work on?

20 Arduino Projects Of 2012. While looking for ideas for new some new project I noticed there aren’t many lists of Arduino projects online so I decided to make one and in the last few days I’ve been carefully digging Reddit (r/Arduino) and the Arduino forum until I ended up with a list of 20 Arduino projects. 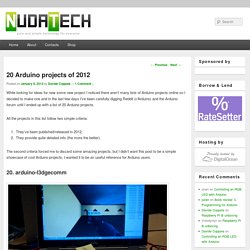 All the projects in this list follow two simple criteria: They’ve been published/released in 2012.They provide quite detailed info (the more the better). The second criteria forced me to discard some amazing projects, but I didn’t want this post to be a simple showcase of cool Arduino projects, I wanted it to be an useful reference for Arduino users. 20 Arduino Projects Of 2013. The world is full of incredible makers which make new amazing things with Arduino every day and I think that collecting and showcasing the most interesting ones can be truly inspirational, especially for people who just started with Arduino or are planning to start soon. 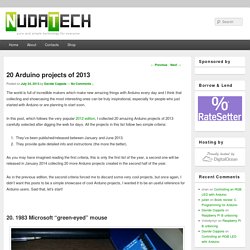 In this post, which follows the very popular 2012 edition, I collected 20 amazing Arduino projects of 2013 carefully selected after digging the web for days. All the projects in this list follow two simple criteria: They’ve been published/released between January and June 2013.They provide quite detailed info and instructions (the more the better). As you may have imagined reading the first criteria, this is only the first list of the year, a second one will be released in January 2014 collecting 20 more Arduino projects created in the second half of the year. 20. 1983 Microsoft “green-eyed” mouse 19. 18. GitHub - mddub/theremax: A theremin-like instrument for Arduino. 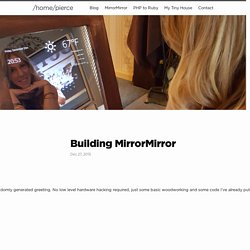 A mostly black web page allows you to add some widgets to the mirror’s reflection as if by magic. This version includes widgets for displaying the weather forecast, the date/time and a nice randomly generated greeting. No low level hardware hacking required, just some basic woodworking and some code I’ve already put together. Lifelong Kindergarten. Hal Abelson, Eric Klopfer, Mitchel Resnick, Andrew McKinney, CSAIL and Scheller Teacher Education Program App Inventor is an open-source tool that democratizes app creation. 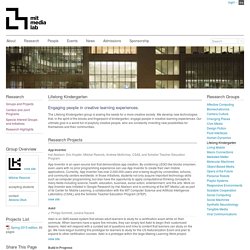 By combining LEGO-like blocks onscreen, even users with no prior programming experience can use App Inventor to create their own mobile applications. Currently, App Inventor has over 2,000,000 users and is being taught by universities, schools, and community centers worldwide. In those initiatives, students not only acquire important technology skills such as computer programming, but also have the opportunity to apply computational thinking concepts to many fields including science, health, education, business, social action, entertainment, and the arts. Projects and Learning Approaches - Maker Ed's Resource Library. “Projects & Learning Approaches” includes a wide variety of information, meant to provide educators and facilitators with ideas for short-term activities as well as open-ended long-term projects, curriculum samples, examples of facilitation methods and practices, and the pedagogies and values aligned with making. 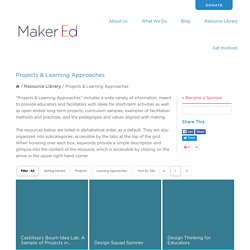 The resources below are listed in alphabetical order, as a default. They are also organized into subcategories, accessible by the tabs at the top of the grid. The Makers Workbench. FISHINO: Arduino becomes wireless. Why “Fishino” ? 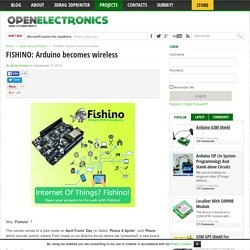 The names comes to a joke made on April Fools’ Day (in Italian “Pesce d’Aprile“, and ‘Pesce‘, which sounds ‘pashe’ means Fish) made on an Arduino forum where we “presented” a new board named “Fishino Zero” which had revolutionary technical specs. The symbol, placed on board’s picture with a graphical editor, was the small fish which became the actual logo. The joke was quite successful, and the idea of building such a board soon appealed to us. The ‘UNO‘ part was then added to symbolize the first board of a series and to mark the complete compatibility to Arduino UNO boards, both in term of connectivity and size.

Another Arduino clone? Not exactly. The integration of aforementioned periferals, in our opinion a must in IOT era, allows the creation of an huge set of appliances which can both be controlled via Internet and upload recorded data to it. Machines — Precious Plastic.