Art of Chucco - My name is Alexandre Belbari and I am a 26 years old animator/Visual development artist working in the cinema and animation industry. Belbari.alexandre@gmail.com. PearlTree7. Totoro Forest Project - Save Totoro Forest. CreatureBox. At long last, we’re extremely excited to announce our new book project: The MONSTER VOLUME. 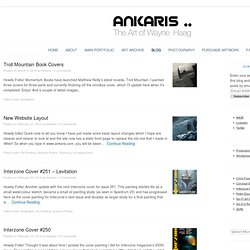 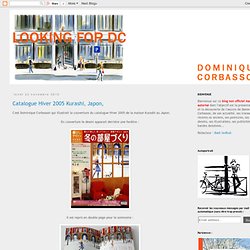 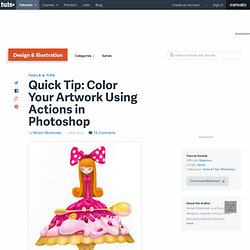 Actions can seriously improve your workflow. In today's quick tip we will demonstrate how to use actions to help color your artwork. Bao. Crane Valley - Portfolio of Works: Samples color. Rupert Bear - A Weird But Compelling Childhhod Icon. Courtesy of Phil Rushton here are some pages from the 1956 Rupert Annual. 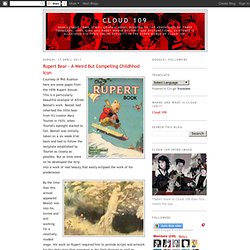 This is a particularly beautiful example of Alfred Bestall's work. Bestall had inherited the little bear from it's creator Mary Tourtel in 1935, when Tourtel's eyesight started to fail. Bestall was initially taken on a six week trial basis and had to follow the template established by Tourtel as closely as possible. But as time went on he developed the strip into a work of real beauty that easily eclipsed the work of his predecessor. By the time that this annual appeared Bestall was into his sixties and still working for a relatively modest wage.

Bestall eventually retired from the strip in 1965 but his work is rightly regarded as being the definitive incarnation of Rupert Bear, whose dream like adventures were counterbalanced by a very English middle class gentility. TADAHIRO UESUGI ILLUSTRATION. Tadahiro Uesugi. The strange thing about Tadahiro Uesugi is the amount of people who have never heard of him… His work (and there is lots and lots of it!)

ILLUSTRATION - Francis Vallejo. The Art of Kinuko Y. Craft. Yaxin the Faun. Tadahiro uesugi. 2010 » May. Writing in her blog on the Telegraph in an article titled Why preserve Van Gogh’s palette? 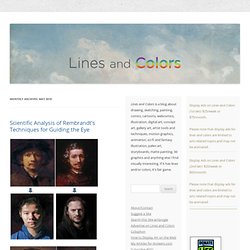 , Lucy Davies points to some of the considerations for artists learning from the palettes of the masters, both in choice and arrangement of colors. Those fascinated by the techniques of the great painters would benefit from understanding their palettes. Even when learning from contemporary artists, the palette plays a greater part than is often acknowledged. I always find instructional videos exasperating when they ignore color mixing and act as though the brush is always magically loaded with the the proper color, with little thought or work on the part of the artist.

This seems to apply to a great majority of the instructional videos one encounters on the web, though those that are professionally prepared often address color mixing more thoroughly (as in the instructional videos of Richard Schmid). [Via Neatorama] TADAHIRO UESUGI ILLUSTRATION. ¡El truco desvelado! Quentin Blake - How I Draw. Read this in french Most of the time I need to do a rough in which I find out how people stand, what sort of expressions they have and how they fit on the page. 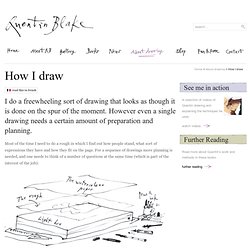 For a sequence of drawings more planning is needed, and one needs to think of a number of questions at the same time (which is part of the interest of the job): Is the method and medium of this drawing suitable to the atmosphere of the book? What goes on which page? Do the actions carry on from one picture to another? The Lightbox Technique. The social network for professionals in entertainment - Animation, Movies, Visual Effects, Games, Illustration, Concept Artists, and more. If you make cool stuff, join us!