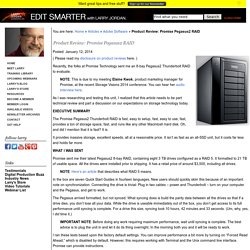 NOTE: This is due to my meeting Elaine Kwok, product marketing manager for Promise, at the recent Storage Visions 2014 conference. You can hear her audio interview here. As I was researching and testing this unit, I realized that this article needs to be part technical review and part a discussion on our expectations on storage technology today. The Promise Pegasus2 Thunderbolt RAID is fast, easy to setup, fast, easy to use, fast, provides a ton of storage space, fast, and runs like any other Macintosh hard disk. It provides massive storage, excellent speeds, all at a reasonable price. 4 x 4TB hard drive RAID 0. 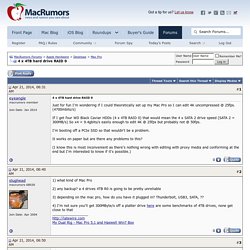 Zero problems, zero drive failures. I used the 3TB Hitachi Deskstars and purchased 4 more spares for when I needed them, I never have. Here's my performance on that 4-drive HDD RAID0: In theory this is "unstable" but the reality is I've had no problems, I also backup to an external RAID and a NAS, so I have quite a bit of redundancy; if a drive ever blows it'll be annoying rebuilding something that large, but not the end of the world. If you want 4x (or more) chances for drive failure, you can skip the Hitachi drives in RAID0 and just buy 1 drive from the world's undisputed leader in drive failures, Seagate! 4 x 4TB hard drive RAID 0. Mac Pro 4TB SATA drive compatible? Turn An Old Computer Into A Do-Anything Home Server With FreeNAS 8. You’ve heard the word “server” thrown around a lot, but it’s usually in the context of websites or big companies that have a lot of data to store. 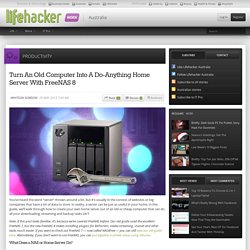 In reality, a server can be just as useful in your home. In this guide, we’ll walk through how to create your own home server out of an old or cheap computer that can do all your downloading, streaming and backup tasks 24/7. Note: If this post looks familiar, it’s because we’ve covered FreeNAS before. Our old guide used the excellent FreeNAS 7, but the new FreeNAS 8 makes installing plugins for BitTorrent, media streaming, Usenet and other tasks much easier. Hardware - Why doesn't my Mac Pro see my new 4TB SATA drive? Best Hard Drive - 39 Charts - UserBenchmark. WD Red 6TB (2014) vs Pro 4TB. Real World Speed Performance profile from 9 user samples The new 4TB WD Red Pro is an upgraded version of WD's popular Red NAS (Network Attached Storage). 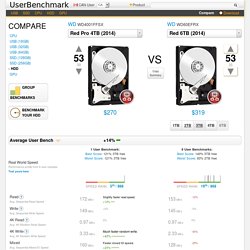 The Pro Reds have a rotation speed of 7200 RPM unlike their regular Red counterparts which are marketed as "IntelliPower" but actually spin at fixed speeds of 5400 or 5700 RPM depending on the exact model. Comparing the regular 3TB Red and the 4TB Pro shows that the pro version is significantly faster across the board. The biggest performance gains are seen in the small file 4K area and are a direct consequence of lower access times due to the higher rotation speed of the Pro Red. The 6TB WD Red is one of the first 6TB consumer drives. Systems with these HDDs Builds that include these HDDs the most. Make the most of your Mac by adding NAS. Your beloved Mac sits at the center of your tech universe, but it falls short when it comes to managing and securing the scores of data you count on each day. 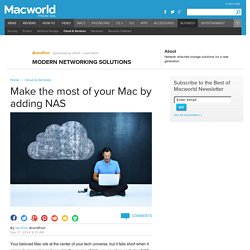 NAS (network attached storage) fills in the gaps, acting as a central hub for all your photos, videos, music, and other files. A proper NAS-Mac setup can save time and reduce stress through easier downloads, improved organization, smoother backups, and more. Here are some great ways you can use NAS to make the most of your Mac. Centralize your files Storing files in the public cloud is a great way to ensure they’re always attainable, but it’s easy to fail to sync the latest version or lose track of which ones you keep where, especially if you use multiple cloud providers to avoid hitting your storage limit.

Share files quickly and easily Sharing files typically means emailing them or sending them through a public cloud provider. Make the most of your Mac by adding NAS. Best Network Attached Storage for Mac - Tom's IT Pro. More Macs than ever are finding their way into the workplace and NAS manufacturers are starting to notice. 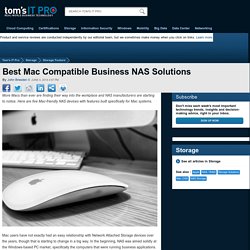 Here are five Mac-friendly NAS devices with features built specifically for Mac systems. Mac users have not exactly had an easy relationship with Network Attached Storage devices over the years, though that is starting to change in a big way. In the beginning, NAS was aimed solidly at the Windows-based PC market, specifically the computers that were running business applications. The format of the drives inside the NAS devices and the protocols needed to connect them to a client or server were often at odds with Mac OS file formats.

Clever Mac users might have been able to find ways to jury-rig specific NAS devices to work with their systems, though this would often make them inaccessible to PCs. The other factor that lead companies to begin seeing Mac users as important consumers is the work that many Mac systems perform. CreativeCOW. A Beginner's Guide to OS X File Sharing. Sharing files over the internet has never been easier thanks to services such as Dropbox, WeTransfer and even email. 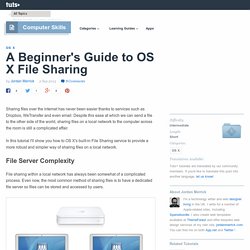 Despite this ease at which we can send a file to the other side of the world, sharing files on a local network to the computer across the room is still a complicated affair. Anyone Use FreeNAS? : SAN - Storage Area Networks. Transform G5 into a NAS? Using Powermac G5 as NAS. Hello All, I have recently purchased a powermac G5 1.6ghz to use for networked attached storage. 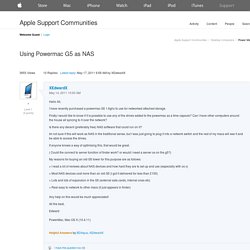 Firstly I would like to know if it is possible to use any of the drives added to the powermac as a time capsule? Can I have other computers around the house all syncing to it over the network? Using Powermac G5 as NAS. Setting up your First NAS with FreeNAS. ZFS RAID levels » ZFS Build. ZFS RAID levels ZFS RAID levels When we evaluated ZFS for our storage needs, the immediate question became – what are these storage levels, and what do they do for us? 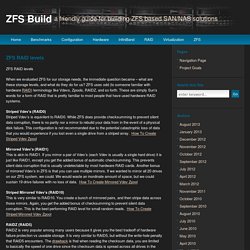 ZFS uses odd (to someone familiar with hardware RAID) terminology like Vdevs, Zpools, RAIDZ, and so forth. WD Red Network-Attached Storage - What is NAS? RAID. RAID (originally redundant array of inexpensive disks; now commonly redundant array of independent disks) is a data storage virtualization technology that combines multiple disk drive components into a logical unit for the purposes of data redundancy or performance improvement.[1] History[edit] Although not yet using that terminology, each of the five levels of RAID named in the paper were well established in the art prior to the paper's publications, for example: Around 1983, DEC began shipping subsystem mirrored RA8X disk drives (now known as RAID 1) as part of its HSC50 subsystem.[3]Around 1988, the Thinking Machines DataVault used error correction codes (now known as RAID 2) in an array of disk drives.[4] A similar approach was used in the 1970s on the IBM 3330.[5]In 1977, Norman Ken Ouchi at IBM filed a patent disclosing what was subsequently named RAID 4.[6]In 1986, Clark et al. at IBM filed a patent disclosing what was subsequently named RAID 5.[7] Concept[edit] Standard levels[edit] 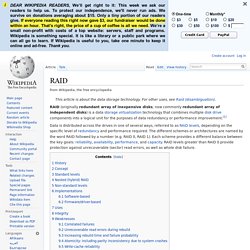 ZFS Raidz Performance, Capacity and Integrity Comparison. July 15, 2014 comparing speed, space and safety per raidz type The ZFS file system on FreeBSD and Ubuntu Linux is incredible. ZFS has data integrity verification, protection against data corruption, support for high storage capacities, great performance, replication, snapshots and copy-on-write clones, and self healing which make it a natural choice for data storage. The most asked question we hear when talking about raids is, "Which raid is the best? " Features.

FreeNAS® supports the core features of a NAS appliance out of the box. However, many users like to enhance their NAS appliance with third party software for media streaming, alternative protocols, or web applications. To make sure your NAS can do everything you want, FreeNAS offers a third-party plugin system based on the FreeBSD jails system and the PBI system from PC-BSD. The plugin system isolates third-party software from the core operating system but allows plugins access to user-specified directories and configuration from the main Web User Interface. bacula Network backup solution (server) btsync Distributed peer-to-peer file syncing application.