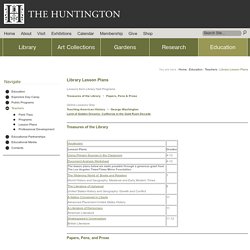 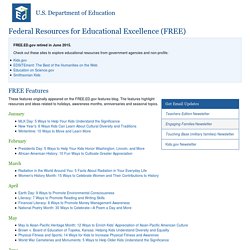 The features highlight resources and ideas related to holidays, awareness months, anniversaries and seasonal topics. January February March April May June July August Back to School: 7 Ways to Help Kids Transition Back to the Classroom September October November December About FREE Federal Resources for Educational Excellence (FREE) offered a way to find digital teaching and learning resources created and maintained by the federal government and public and private organizations. FREE was conceived in 1997 by a federal working group in response to a memo from the President. Technology has made it increasingly easier to find information from government agencies or with custom search tools, like Kids.gov. FREE Disclaimer. Extension Activities Menus. Why We Need Common Core: "I choose C.".

Videos, Common Core Resources And Lesson Plans For Teachers: Teaching Channel. DE Common Core Resources. Scope and Sequence. ELA Professional Learning Webcasts - Grade 2. LearnZillion. Close_reading_article. Common Core Connections: Unpacking Academic Vocabulary. Quick Guide to the Common Core: Key Expectations Explained - Vander Ark on Innovation. How the Common Core Will Change the Way Teachers Teach and Students Learn Guest Post By Adam Berkin, vice president of product development at Curriculum Associates Since the Common Core State Standards were introduced, there has been much discussion about what they mean for educators and students and how they will impact teaching and learning. 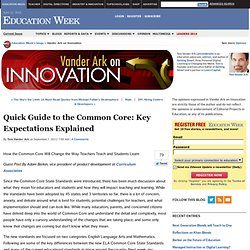 While the standards have been adopted by 45 states and 3 territories so far, there is a lot of concern, anxiety, and debate around what is best for students, potential challenges for teachers, and what implementation should and can look like. While many educators, parents, and concerned citizens have delved deep into the world of Common Core and understand the detail and complexity, most people have only a cursory understanding of the changes that are taking place, and some only know that changes are coming but don't know what they mean. 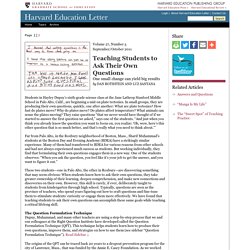 In small groups, they are producing their own questions, quickly, one after another: What are plate tectonics? How fast do plates move? Why do plates move? Do plates affect temperature? What animals can sense the plates moving? Far from Palo Alto, in the Roxbury neighborhood of Boston, Mass., Sharif Muhammad’s students at the Boston Day and Evening Academy (BDEA) have a strikingly similar experience. These two students—one in Palo Alto, the other in Roxbury—are discovering something that may seem obvious: When students know how to ask their own questions, they take greater ownership of their learning, deepen comprehension, and make new connections and discoveries on their own. 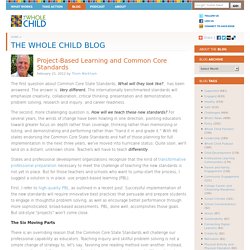 , has been answered. The answer is: Very different. The internationally benchmarked standards will emphasize creativity, collaboration, critical thinking, presentation and demonstration, problem solving, research and inquiry, and career readiness. The second, more challenging question is, How will we teach these new standards? For several years, the winds of change have been howling in one direction, pointing educators toward greater focus on depth rather than coverage, thinking rather than memorizing or listing, and demonstrating and performing rather than "hand it in and grade it.

" States and professional development organizations recognize that the kind of transformative professional preparation necessary to meet the challenge of teaching the new standards is not yet in place. First, I refer to high-quality PBL, as outlined in a recent post. The Six Moving Parts Moving from instruction to inquiry. MasteryConnect.