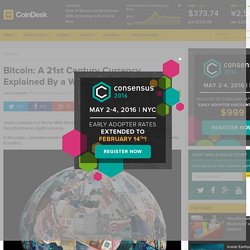 In this paper, Leibowitz answers questions about how bitcoin was created, how it works and why it matters. It has been described as a "techno tour de force" by Microsoft founder Bill Gates, and as a "remarkable cryptographic achievement…that has enormous value" by Google CEO, Eric Schmidt. It was even predicted by Nobel Prize-winning economist Milton Friedman in 1999 when he said, "The one thing that’s missing, but will soon be developed, is a reliable e-cash. " Friedman was a visionary, and in this instance he was a decade ahead of the rest, foreseeing the advent of digital currency, and more specifically, bitcoin.

Bitcoin’s rise to prominence is causing a global rethink of the concept of money. However, government-backed money has not stood the test of time; the average life of fiat currency is only 27 years. The origin of bitcoin How bitcoin works The philosophy of money. LEIBOWITZ, Jason. Bitcoin: A 21st Century Currency Explained By a Wall Street Veteran. In : CoinDesk [en ligne]. (publié le 07/02/2016) Disponible sur : < (Consulté le 09/02/20. The Definitive History of Bitcoin. DESJARDINS, Jeff. The Definitive History of Bitcoin. In : Visual Capitalist [en ligne]. (publié le 13/02/2014) Disponible sur : < (Consulté le 09/02/2016) Bitcoin. Reddit. r/bitcoin [en ligne]. Disponible sur : < (Consulté le 09/02/2016) TBI's Daily Bit. Thanks to those of you who have contributed to the Bit. 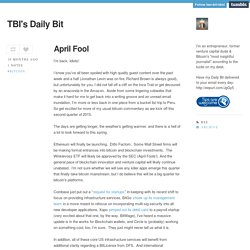 I was ~$2,700 in the hole last week, and I’m now down to only $1,789. When I get down to zero, I’ll delete this banner. I’ve cut down the losses by 1/3; now I just need some corporate love… 18Za7SmHRxbmkEj5QLeSqnYWGm8zjsWf7y Speaking of cutting down losses and raising money, today an update from the Bitcoin Foundation’s Executive Director, Patrick Murck.

It’s been quite the four month turnaround… “Turning the Corner” | Patrick Murck, Executive Director at The Bitcoin Foundation When I took over as Executive Director in November, my goal was to get the Foundation running like a business. Reputation strugglesSpread too thin as a result of lack of focusDeclining membership revenueFalling bitcoin priceWeak balance sheet In spite of these challenges, we had an opportunity to refocus our efforts and create a clear value proposition for our membership and the broader community interested in blockchain technology and digital currency. SELKIS, Ryan. Two Bit Idiot’s Daily Bit [en ligne]. (modifié le 01/04/2015) Disponible sur : < (Consulté le 09/02/2016) Bitcoin Forum - Index. Bitcointalk.org. Bitcoin Forum [en ligne]. Disponible sur : < (Consulté le 09/02/2016) 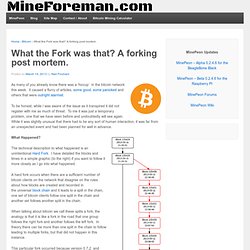 It caused a flurry of articles, some good, some panicked and others that were outright alarmist. To be honest, while I was aware of the issue as it transpired it did not register with me as much of threat. To me it was just a temporary problem, one that we have seen before and undoubtedly will see again. While it was slightly unusual that there had to be any sort of human interaction, it was far from an unexpected event and had been planned for well in advance.