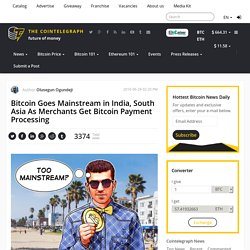 Bitcoin use in India and the entire South Asia has just received the required push to make the digital currency more mainstream globally as merchants in the second largest country in the world - more than a billion population - are presented with the opportunity to process its payment for the first time. Mohit Kalra, CEO at Coinsecure, says to CoinTelegraph: “When we talk about the size of the market- there are over 1.2 billion individuals living in India right now. India is second in population size to China. Imagine if only 0.5 billion individuals got into the market. Estonian Government Partners with Bitnation to Offer Blockchain Notarization Services to e-Residents. In May, Bitcoin Magazine reported that blockchain-based Governance 2.0 initiative Bitnation is developing a collaborative platform for DIY Governance based on the blockchain. 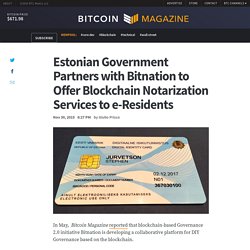 “Bitnation is a Governance 2.0 Operating System, designed to disrupt the nation-state oligopoly through offering more convenient, secure and cost-efficient governance services,” said Bitnation founder and CEO Susanne Tarkowski Tempelhof. Bitnation is one of several emerging initiatives to empower connected global citizens with a growing range of options to bypass legacy governance systems based on nation states. The e-Residency program launched by the government of Estonia is another such initiative. The program offers anyone, anywhere, a digital identity issued by the Estonian government and the possibility to start and operate a business online under Estonian regulations.

La'Zooz: The Decentralized, Crypto-Alternative to Uber. What makes a lot of people uncomfortable about a phenomenon like Uber, when you get right down to it, is how it is owned. 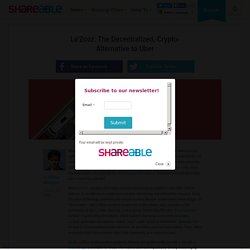 As in other mega-Internet companies, a small number of owners poised to take over a global industry—in this case, the taxi industry with ownership currently spread out among local drivers and operators. In response to Uber’s rise, there has been a flurry of proposals for driver-owned alternatives. But what if the real Uber-killer were owned by nobody? Meet La'Zooz, a project that began in Israel but belongs to nowhere. How Bitcoin Can Help Millions of Women Around the World. This is a guest post by Digital Currency Councilmember Amor Sexton Western Union released a reporton the role of women in global remittances. 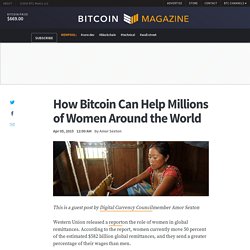 According to the report, women currently move 50 percent of the estimated $582 billion global remittances, and they send a greater percentage of their wages than men. Women also are the largest group of recipients, receiving over two-thirds of remittances. The flow of money to these women can be a matter of life and death if they have no alternative means of earning a living. The United Nations reports that despite women working two-thirds of the world’s working hours and producing more than 50 percent of the world’s food, women earn only 10 percent of the world’s income and own less than 1 percent of property. Why Bitcoin Will Thrive First in the Developing World.

Explaining the appeal of bitcoin to the average American isn’t easy. 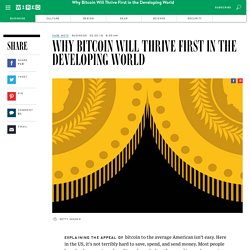 Here in the US, it’s not terribly hard to save, spend, and send money. Most people have bank accounts and credit cards, and when they need to send money to a friend, relative, or acquaintance, they can use any number of online services, from PayPal and Square to SnapChat and Facebook. For most people, bitcoin and other digital currencies looks like a solution in need of a problem—a technological end-run around big banks and big government that interests only geeks, drug dealers, and crazed libertarians. Indeed, the number of people who use bitcoin as a currency—as opposed to an investment, a bet that its value will rise in time—remains relatively small. The big-name online retailer Overstock.com started accepting bitcoin payments in early 2014, and two years later, the digital currency accounts for no more than 0.1 percent of sales.

7 Must See Bitcoin Documentaries. Update (30th June 15:05 BST): This article has been updated with an additional entry. 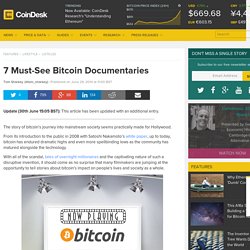 The story of bitcoin’s journey into mainstream society seems practically made for Hollywood. From its introduction to the public in 2008 with Satoshi Nakamoto’s white paper, up to today, bitcoin has endured dramatic highs and even more spellbinding lows as the community has matured alongside the technology. With all of the scandal, tales of overnight millionaires and the captivating nature of such a disruptive invention, it should come as no surprise that many filmmakers are jumping at the opportunity to tell stories about bitcoin’s impact on people's lives and society as a whole. Because bitcoin is so technically complex and the concept of purely digital money is such a novelty to most people, it is sometimes difficult to communicate its value and its potential to truly change society on a global scale. 1. 2. 3. 4.

How Cryptocurrency Is Lifting Hope for South Africa's Women. Digital currency, aka cryptocurrency, is shaking up the financial industry’s entrenched institutions, and now its potential for doing good is dawning — as it enables accountability and financial sovereignty one mobile click at a time. 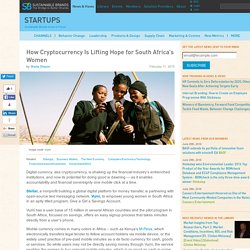 Stellar, a nonprofit building a global digital platform for money transfer, is partnering with open-source text messaging network, Vumi, to empower young women in South Africa in an aptly titled program, Give a Girl a Savings Account. Vumi has a user base of 15 million in several African countries and the pilot program in South Africa, focused on savings, offers an easy signup process that takes minutes directly from a user’s phone. Mobile currency comes in many colors in Africa – such as Kenya’s M-Pesa, which electronically transfers legal tender to fellow account holders via mobile device, or the widely used practice of pre-paid mobile minutes as a de facto currency for cash, goods or services. It’s become a proven fact that women are key to microfinance. Are Permacredits the Future of Sustainable Living?

The crypto community is expanding with new currencies centered around Bitcoin 2.0, some of which are increasing the possibilities of the Bitcoin ecosystem. 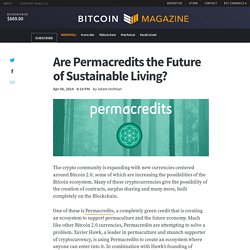 Many of these cryptocurrencies give the possibility of the creation of contracts, surplus sharing and many more, built completely on the Blockchain. One of these is Permacredits, a completely green credit that is creating an ecosystem to support permaculture and the future economy. Much like other Bitcoin 2.0 currencies, Permacredits are attempting to solve a problem. Meanwhile in Asia: Cryptotechnologies and Economies.