The Best 100 Opening Lines From Books. How to Write a Personal Bio: 6 steps (with pictures) Ambiguous Words. Color Psychology. By David Johnson Like death and taxes, there is no escaping color. 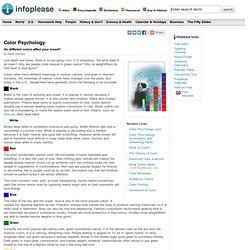 It is ubiquitous. Yet what does it all mean? Why are people more relaxed in green rooms? Why do weightlifters do their best in blue gyms? Colors often have different meanings in various cultures. Black Black is the color of authority and power. White Brides wear white to symbolize innocence and purity. Red The most emotionally intense color, red stimulates a faster heartbeat and breathing. The most romantic color, pink, is more tranquilizing. Blue The color of the sky and the ocean, blue is one of the most popular colors. Green Currently the most popular decorating color, green symbolizes nature. Yellow Cheerful sunny yellow is an attention getter. Purple The color of royalty, purple connotes luxury, wealth, and sophistication.

Brown Solid, reliable brown is the color of earth and is abundant in nature. Colors of the Flag. A Simple Novel Outline – 9 questions for 25 chapters « H.E. Roulo. Just as every tree is different but still recognizably a tree, every story is different but contains elements that make it a story. 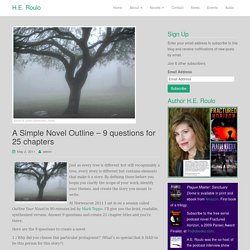 By defining those before you begin you clarify the scope of your work, identify your themes, and create the story you meant to write. At Norwescon 2011 I sat in on a session called Outline Your Novel in 90-minutes led by Mark Teppo. I’ll give you the brief, readable, synthesized version. Answer 9 questions and create 25 chapter titles and you’re there. Here are the 9 questions to create a novel: 1.) 2.) 3.) 4.) 5.) 6.) 7.) 8.) 9.) Now, with those 9 questions answered to your satisfaction, try to fill in a 25 chapter, 75,000 word outline.

Chapters 7-18 are the middle of your book. Chapters 19-25 depict the heroic act to victory. Wasn’t that easy? Popular Quotes. Eight Secrets Which Writers Won’t Tell You. Image from Flickr by Lazurite This is not particularly relevant to the post, but I’m getting an awful lot of comments telling me, often a little snarkily, “it’s ‘THAT’ not ‘WHICH’”. 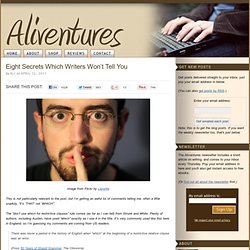 The “don’t use which for restrictive clauses” rule comes (as far as I can tell) from Strunk and White. Plenty of authors, including Austen, have used “which” exactly as I use it in the title. It’s very commonly used like this here in England, so I’m guessing my comments are coming from US readers. There was never a period in the history of English when “which” at the beginning of a restrictive relative clause was an error. I thought about putting “that” in the title – but I like the sound of “which” between “secrets” and “writers”. And with that out of the way, enjoy the post! A few years ago, I’d look at published writers and think that they were somehow different from me. 25 Things You Should Know About Word Choice. 1. 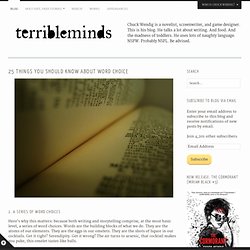 A Series Of Word Choices Here’s why this matters: because both writing and storytelling comprise, at the most basic level, a series of word choices. Words are the building blocks of what we do. They are the atoms of our elements. They are the eggs in our omelets. 2. Words are like LEGO bricks: the more we add, the more we define the reality of our playset. 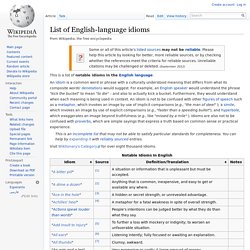 Idioms are also not to be confused with proverbs, which are simple sayings that express a truth based on common sense or practical experience. Visit Wiktionary's Category for over eight thousand idioms. See also[edit] Prettiest Words: A Work in Progress. 201 Ways to Arouse Your Creativity. Arouse your creativity Electric flesh-arrows … traversing the body. 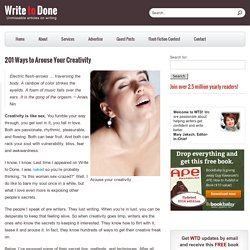 A rainbow of color strikes the eyelids. A foam of music falls over the ears. It is the gong of the orgasm. ~ Anais Nin Creativity is like sex. I know, I know. The people I speak of are writers. Below, I’ve exposed some of their secret tips, methods, and techniques. Now, lie back, relax and take pleasure in these 201 provocative ways to arouse your creativity. Lists.