New Year, New (Growth) Mindset - Growth Mindset Blog & Newsletter. I have a question for our readers - How many of you have a bad habit? 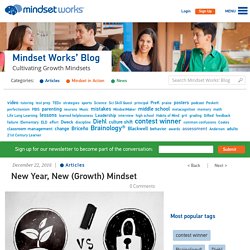 Anyone? Exactly! We all have them, but here's something important to remember: We can both curb old habits and create new, better habits using our brain. I want you to think about your "bad" habits as these strong neural pathways that your brain has built up. They're those old familiar paths that you know how to do so well (and then you can be really hard on yourself when you do them). This new year, how about we all promise to be kinder to ourselves about our bad habits and see them for what they are: proof that we have grown strong neural pathways in the past to develop habits, and inspiration that we CAN DO SO AGAIN. It's going to be normal this January and February for all of us to slip down those familiar paths while we try to achieve our new goals and resolutions.

But guess what? New Year, New (Growth) Mindset - Growth Mindset Blog & Newsletter. GrowthMindset Activity1. What Olympians Can Show Us About Setting Big Goals. At the United States Track & Field Olympic Team Trials in Eugene, Oregon, 28-year-old Brenda Martinez was in prime position to win her best event, the 800-meter run, which would qualify her for the Olympics for the very first time. 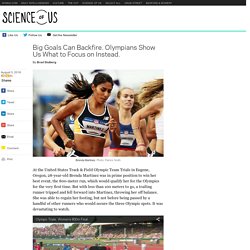 But with less than 100 meters to go, a trailing runner tripped and fell forward into Martinez, throwing her off balance. She was able to regain her footing, but not before being passed by a handful of other runners who would secure the three Olympic spots. It was devastating to watch. Martinez could have been distraught and dejected. She failed (and largely due to bad luck) to achieve her goal of making the Olympics in her strongest event. 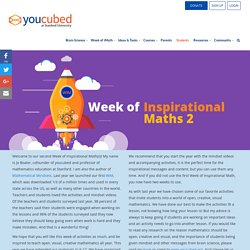 My name is Jo Boaler, cofounder of youcubed and professor of mathematics education at Stanford. I am also the author of Mathematical Mindsets. Last year we launched our first WiM, which was downloaded 1/3 of a million times and used in every state across the US, as well as many other countries in the world. The Educator with a Growth Mindset: A Professional Development Workshop. I had the great privilege of facilitating a staff workshop on growth mindsets for the teachers and staff at Carlos Rosario International School and more recently at ISTE 2015. 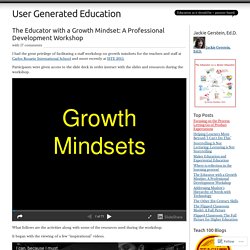 Participants were given access to the slide deck in order interact with the slides and resources during the workshop. What follows are the activities along with some of the resources used during the workshop. It began with the viewing of a few “inspirational” videos. Exploring the Characteristics of Growth v Fixed Mindsets. Developing a Growth Mindset in Teachers and Staff. The New Psychology of Success (2000), Dweck developed a continuum upon which people can be placed, based upon their understandings about where ability comes from. For some people (at one end of said continuum), success (and failure) is based on innate ability (or the lack of it). Deck describes this as a fixed theory of intelligence, and argues that this gives rise to a ‘fixed mindset’. At the other end of the continuum are those people who believe success is based on a growth mindset.

These individuals argue that success is based on learning, persistence and hard work. A Growth Mindset Could Buffer Kids From Negative Academic Effects of Poverty. Stanford psychologist Carol Dweck, along with other education researchers interested in growth mindset, have done numerous studies showing that when students believe their intelligence can grow and change with effort, they perform better on academic tests. 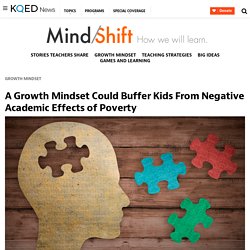 These findings have sparked interest and debate about how to encourage a growth mindset in students both at home and at school. Now, a national study of tenth-graders in Chile found student mindsets are correlated to achievement on language and math tests. And students from low-income families were less likely to hold a growth mindset than their more affluent peers. However, if a low-income student did have a growth mindset, it worked as a buffer against the negative effects of poverty on achievement. 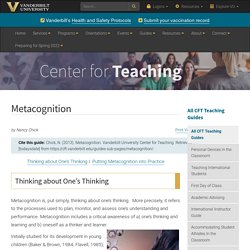 More precisely, it refers to the processes used to plan, monitor, and assess one’s understanding and performance. Initially studied for its development in young children (Baker & Brown, 1984; Flavell, 1985), researchers soon began to look at how experts display metacognitive thinking and how, then, these thought processes can be taught to novices to improve their learning (Hatano & Inagaki, 1986). Metacognitive practices increase students’ abilities to transfer or adapt their learning to new contexts and tasks (Bransford, Brown, & Cocking, p. 12; Palincsar & Brown, 1984; Scardamalia et al., 1984; Schoenfeld, 1983, 1985, 1991). Education Week. "I'm not a math person. 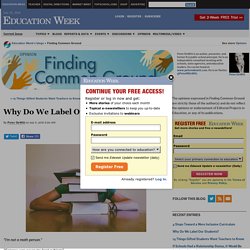 " "Science was never my best subject. " "Oh. I can't learn a new language. I'm just not good at that. " "I'm a visual learner, so I can't learn in a lecture. " 5 Growth Mindset Strategies for Your Classroom. Self-Efficacy & The Growth Mindset Let’s say that you are now a 25 year teaching veteran. 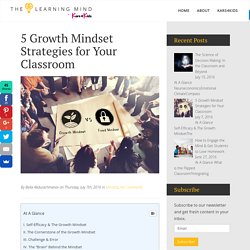 Reflecting back, you realize that you had two students in your career who loved learning so much that they gave you suggestions for the following week’s lesson. Those same students had asked you for extra homework assignments on the side. Some might wonder, “What’s wrong with them?” How you can be good at math, and other surprising facts about learning. Taking A New Pathway Through Your Teaching: The Wonder Of Mindset Mathematics. Imagine going to school each day and entering a classroom filled with students who are eager to explore mathematical ideas, willing to embrace failure and struggle, and persistent with any math problem you give them. 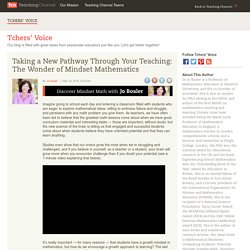 As teachers, we have often been led to believe that the greatest math lessons come about when we have good curriculum materials and interesting tasks — those are important, without doubt, but the new science of the brain is telling us that engaged and successful students come about when students believe they have unlimited potential and that they can learn anything.

Studies even show that our brains grow the most when we’re struggling and challenged, and if you believe in yourself, as a teacher or a student, your brain will grow more when you encounter challenge than if you doubt your potential (see a 1-minute video explaining that below). Register For Jo Boaler’s Online Class. Developing a Growth Mindset in Teachers and Staff. Resources for growth and learning mindsets. Growth Mindset: How to Normalize Mistake Making and Struggle in Class. Carol Dweck’s research on growth mindset has become essential knowledge in education circles. 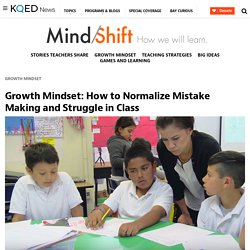 The Stanford psychologist found that children who understand that their brains are malleable and can change when working through challenging problems can do better in school. Now, many school districts are attempting to teach growth mindset to their students. At the core of this practice is the idea of “productive failure” (a concept Dr. Manu Kapur has been studying for over a decade)* and giving students the time and space to work through difficult problems. Another key idea is to praise the process and effort a child puts in, not the final product. Growth Mindset resource and. Why do kids need to learn to struggle? As adults we all know the most rewarding experiences in life often involve significant struggle and sacrifice at some stage. Personally the greatest joys in my life have all come with some form of struggle… Being married. We are very happily married, but that doesn’t mean we are always very happy with one another.

Being a parent. Staying healthy. EARLI(A)%2008. Week of Inspirational Math. Norms-Paper-2015. Growth mindset theory is 'overplayed' and could be harmful, geneticist warns. A leading geneticist has challenged the hugely popular growth mindset theory about pupils’ attainment, warning that it is “greatly overplayed” and could even be harmful to children. Robert Plomin, professor of behavioural genetics at King’s College London, voiced his concerns in an exclusive interview with TES.

The growth mindset theory, developed by Stanford University-based psychologist Professor Carol Dweck, states that an individual’s learning is shaped by whether they believe their intelligence is fixed or can be changed. 'Praise the effort, not the outcome? Think again' Always try to praise the effort, not the outcome. That’s the lesson that parents and teachers often take from my work. But it’s the wrong lesson, or it can easily become so. Yes, the research that underpins growth mindset theory does show that praising children’s hard work or strategies when they’ve done well – “process praise” – has a number of positive effects. Praising children’s ability (“You’re really good at this!” ISTE 2015. Discover strategies for increasing your growth mindset as an educator and assisting your learners in developing strong, academic mindsets. We'll guide you through interactive, experiential online activities.

Embracing Messy Learning. Learning is a messy process -- and authentic, project-based learning immerses us in unique parts of this mess. There are days when my check-ins with students reveal that many young people are lost or unclear about how to proceed with the early stages of a project. "What topic are you going to focus on? " I ask Keith as I kneel down next him. "I can’t decide. I’m stuck," he mumbles, leaning forward and staring straight into his computer screen as he talks.

Developing a Growth Mindset in Teachers and Staff. Avoiding "Learned Helplessness" New Research: Students Benefit from Learning That Intelligence Is Not Fixed. Arten Popov Teaching students that intelligence can grow and blossom with effort – rather than being a fixed trait they’re just born with – is gaining traction in progressive education circles. Five Reasons to Stop Saying "Good Job!" (**) - Alfie Kohn. Mindsets Keynote - Google Slides. The Educator with a Growth Mindset: A Staff Workshop. How Educators Can Assist Learners in Developing a Growth Mindset.

7 Wonderful TED Talks on Learning from Failure. To err is human and acknowledging one's mistakes is the first step towards learning not to do them again. The best thing about making mistakes is the learning that comes out of them. Mistakes are indicative of an ongoing healthy process of learning. 5 Ways to Help Your Students Become Better Questioners. The humble question is an indispensable tool: the spade that helps us dig for truth, or the flashlight that illuminates surrounding darkness. Questioning helps us learn, explore the unknown, and adapt to change. That makes it a most precious “app” today, in a world where everything is changing and so much is unknown.

And yet, we don’t seem to value questioning as much as we should. For the most part, in our workplaces as well as our classrooms, it is the answers we reward -- while the questions are barely tolerated. To change that is easier said than done. Educational Leadership:Giving Students Meaningful Work:Even Geniuses Work Hard. Creating a Growth Mindset in Your Students. Belief that you can become smarter and more talented opens the doorways to success. That’s what twenty years of research has shown Carol Dweck of Stanford University. She has identified two opposing beliefs about intelligence and talent, beliefs that strongly impact our ability to learn. Why the Growth Mindset is the Only Way to Learn. “You’re too old to learn a foreign language.” “I couldn’t work on computers. Growth Mindset Maths - Growth Mindset Maths. Nurturing Intrinsic Motivation and Growth Mindset in Writing. Growth-mindset-framing-tool.pdf.

A Passion for Math: Elly Schofield at TEDxClaremontColleges. 4 Ways to Encourage a Growth Mindset in the Classroom. New Research: Students Benefit from Learning That Intelligence Is Not Fixed. Why the Growth Mindset is the Only Way to Learn. Growth Mindset and SBG Bulletin Board Downloads.