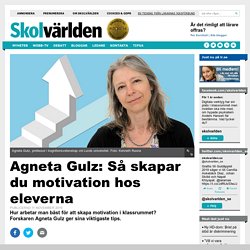 Vad ligger bakom elevers låga motivation? – Det är en blandning av en mängd olika saker. Strategies for Students With Scattered Minds. Imagine a team without a coach guiding players toward working together to execute a winning strategy. Imagine a company without a leader to make sure that employees across departments are equipped and organized to collaborate on continually improving products and increasing sales. Imagine a marching band without a drum major to lead musicians through their complicated maneuvers while staying on beat.

The brain’s executive function network performs in the same capacity as a coach, CEO, or drum major: directing one’s thinking and cognitive abilities toward setting goals and planning to achieve them, establishing priorities, getting and staying organized, and focusing attention on the task at hand. Never Too Late: Creating a Climate for Adults to Learn New Skills. When it comes to kids, growth mindset is a hot topic in education. Studies indicate that children who view intelligence as pliable and responsive to effort show greater persistence when encountering new or difficult tasks. In contrast, children who view intelligence as static or “fixed” have a harder time rebounding from academic setbacks or are reluctant to take on new challenges that might be difficult.

Students are not the only ones encountering new challenges at school: Teachers face an evolving profession, driven in part by technology and a rapidly changing economy. Math teacher Jim Doherty remembers the conversation that became the catalyst for his mid-career journey. After he observed a teacher’s classes and offered some feedback, his colleague replied, “I’ve been at this awhile. Doherty’s gut response was reflective. Soon, he became actively involved in the MathTwitterBlogsphere, eventually contributing to an instructional e-book. Advancing Learning: Five strategies to help students cultivate a growth mindset. By Chia Suan Chong What is a ‘growth mindset’, and how can it help your students? 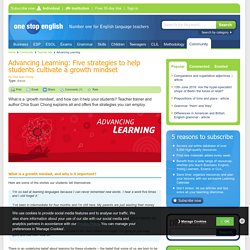 Teacher trainer and author Chia Suan Chong explains all and offers five strategies you can employ. What is a growth mindset, and why is it important? Here are some of the stories our students tell themselves: ‘I’m so bad at learning languages because I can never remember new words. ‘I’ve been in intermediate for four months and I’m still here. ‘I’m really good at languages and I don’t need to work with my classmates on projects to improve my English. ‘I’ve just made a mistake and now everyone in the class thinks I’m stupid. There is an underlying belief about learning for these students – the belief that some of us are born to be good at certain things, and then there are things that we are not going to be good at.

The above constitutes what we consider today to be a fixed mindset – one that sees our character and our intelligence as static and unchangeable. ‘Technology isn’t my thing. 1. 2. 3. 4. 5. Motivating the unmotivated. Tips for Teaching Realistic Optimism. Att lyckas eller misslyckas i skolan? · Lärarnas Riksförbund. Vad är delaktighet? 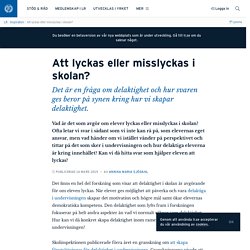 För att förstå vad delaktighet är behöver vi utgå från en definition. Developing Confidence Through Delayed Grading. Carol Dweck Explains The 'False' Growth Mindset That Worries Her. Carol Dweck has become the closest thing to an education celebrity because of her work on growth mindset. Her research shows that children who have a growth mindset welcome challenges as opportunities to improve, believing that their abilities can change with focused effort. Kids with fixed mindsets, on the other hand, believe they have a finite amount of talent that can't be altered and shy away from challenges that might reveal their inabilities. Dweck believes educators flocked to her work because many were tired of drilling kids for high-stakes tests and recognized that student motivation and love for learning was being lost in the process.

But Dweck is worried that as her research became more popular, many people oversimplified its message. In an interview with The Atlantic, Dweck explained to reporter Christine Gross-Loh all the ways she sees growth mindset being misappropriated. Angela Lee Duckworth: The key to success? Grit. Carol Dweck: Kraften i att tro att du kan bli bättre. Strategies for Helping Students Motivate Themselves. My previous post reviewed research on extrinsic and intrinsic motivation, and described the four qualities that have been identified as critical to helping students motivate themselves: autonomy, competence, relatedness, and relevance. In this post, I’ll discuss practical classroom strategies to reinforce each of these four qualities. Autonomy Providing students with freedom of choice is one strategy for promoting learner autonomy.

Educators commonly view this idea of choice through the lens of organizational and procedural choice. Organizational choice, for example, might mean students having a voice in seating assignments or members of their small learning groups. Dynamiskt tankesätt – JL Skolutveckling. Carol Dweck Explains the False Growth Mindset - The Atlantic. The mindset ideas were developed as a counter to the self-esteem movement of blanketing everyone with praise, whether deserved or not. 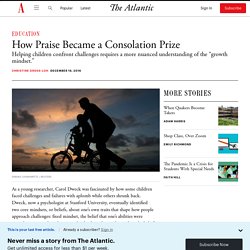 To find out that teachers were using it in the same way was of great concern to me. The whole idea of growth-mindset praise is to focus on the learning process. Skaffa mera grit 7 februari kl 10:03 - Kropp & Själ. Angela Lee Duckworth: Grit: The power of passion and perseverance. Beyond Working Hard: What Growth Mindset Teaches Us About Our Brains. Developing a Growth Mindset in Teachers and Staff. The New Psychology of Success (2000), Dweck developed a continuum upon which people can be placed, based upon their understandings about where ability comes from.

For some people (at one end of said continuum), success (and failure) is based on innate ability (or the lack of it). Growingminds - Orkar ditt barn anstränga sig? Vi träffade... Carol Dweck - A Study on Praise and Mindsets.