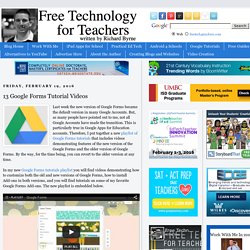 But, as many people have pointed out to me, not all Google Accounts have made the transition. This is particularly true in Google Apps for Education accounts. Therefore, I put together a new playlist of Google Forms tutorials that includes videos demonstrating features of the new version of the Google Forms and the older version of Google Forms. By the way, for the time being, you can revert to the older version at any time. TP1010. How to Use Crowdsourcing in the Classroom. This post originally appeared in Edudemic on Oct. 31st, 2013 The Connected Student Series Crowdsourcing is an important information literacy skill. Jeff Howe was the first to coin the term “crowdsourcing” in Wired Magazine in 2006. In his article, Howe describes how the internet has created a virtual crowd that allows us to share our passions and interests. This is important for students because the idea of crowdsourcing will allow them to utilize personal learning networks to gain a diversity of opinions, find outside experts and use the wisdom of a network or crowd to find more thorough answers and ask better questions.

Howe feels there are two important components to crowdsourcing. Our students write reports from information they find on the internet, not a library book. Students can develop these important skills by being allowed to crowdsource their learning. 10 Important Google URLs That Every Google User Should Know. Which websites and apps have background access to my Google account? 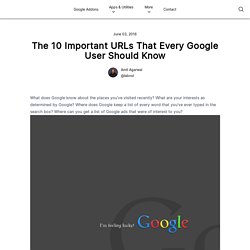 40 Google Plus Tips for Newbies. Ok, so at this point, we are all newbies at Google Plus, right? 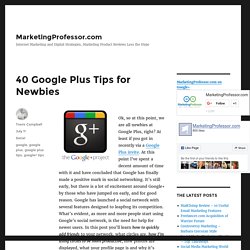 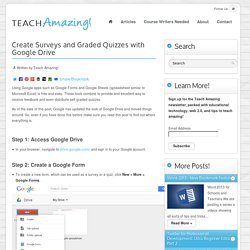 Using Google apps such as Google Forms and Google Sheets (spreadsheet similar to Microsoft Excel) is free and easy. These tools combine to provide and excellent way to receive feedback and even distribute self-graded quizzes. As of the date of this post, Google has updated the look of Google Drive and moved things around. 5 Tips for Using Google Apps on an iPad. Kasey Bell is an instructional technology consultant with a Master’s degree in Educational Technology, and more than ten years in the field of education. 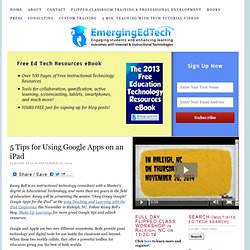 Kasey will be presenting the session “Ooey Gooey Google! Google Apps for the iPad” at the 2014 Teaching and Learning with the iPad Conference this November in Raleigh, NC. Follow Kasey Bell’s blog, Shake Up Learning, for more great Google tips and edtech resources. Google and Apple are two very different ecosystems. An Excellent New Feature for Google Docs. July 1, 2014 A few days ago Google released a few interesting updates to its Drive applications. 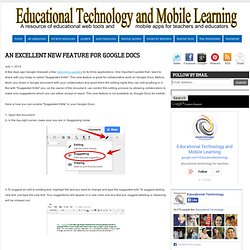 One important update that I want to share with you today is called "Suggested Edits". This new feature is great for collaborative work on Google Docs. Before, when you share a Google document with your collaborators and grant them the editing rights they can edit anything in it. But with "Suggested Edits" you, as the owner of the document, can control this editing process by allowing collaborators to make only suggestions which you can either accept or reject. 7-wonderful-google-docs-tutorials-for. Google Docs: Which Workflow Works for You? On Twitter this week I was asked how I manage Google docs with so many students. 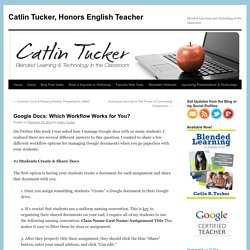 I realized there are several different answers to this question. I wanted to share a few different workflow options for managing Google documents when you go paperless with your students. #1 Students Create & Share Docs The first option is having your students create a document for each assignment and share that document with you. 1. 2. 3. 10 Free Google Chrome Extensions Teachers Should Try. If you use Google Chrome as your go-to web browser, you may have seen a little icon for the ‘Store’ (like what you see on the right) when you attempt to open a new tab. 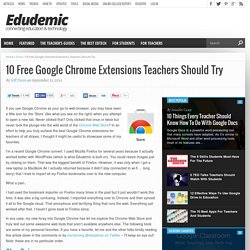 Never clicked that? Only clicked that once or twice but never took the plunge into the wild world of the Chrome Web Store? 7 Google Search Tips Worth Learning. In case you haven’t noticed from many of our recent posts, Texthelp has gone Google with our new Read&Write for Google™ Chrome extension. 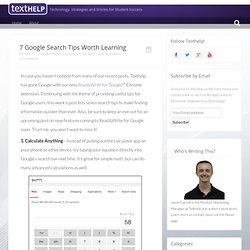 Continuing with the theme of providing useful tips for Google users, this week’s post lists seven search tips to make finding information quicker than ever. Also, be sure to keep an eye out for an upcoming post on new features coming to Read&Write for Google soon. Trust me, you won’t want to miss it! 1. Calculate Anything – Instead of pulling out the calculator app on your phone or other device, try typing your equation directly into Google’s search bar next time. 2. 3. 4. 5. Using Google Forms. Peer Assessment with Google Forms and Filters. 10 Things Every Teacher Should Know How To Do With Google Docs. Google Docs is a powerful word processing tool that many schools have adopted. 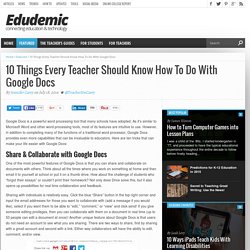 As it’s similar to Microsoft Word and other word processing tools, most of its features are intuitive to use. However, in addition to completing many of the functions of a traditional word processor, Google Docs provides even more capabilities that can be invaluable to educators. 10 Free Google Chrome Extensions Teachers Should Try. Google Drive Blog: A few more ways to make Forms your own. Earlier this month, Google Forms got snazzed up with new customizable and pre-designed themes that let you easily create beautiful surveys—and today’s updates give you even more ways to build and share those surveys.

Find what you’re looking for Similar to Docs and Slides, you can use the “Search the menus” shortcut to get quick access to nearly all the features in Forms, without having to dig through the different menus at the top of the page. To find a feature, simply press Alt+/ or look under the Help menu. 20 Things You Can Do With Google Classroom. How to Search for Publicly Shared Google Documents. 4 Tips for Having Students Take Notes in Google Docs. If you are having students take notes in a Google Doc, in particular if those notes require diagrams, consider providing the students with a Google Doc that contains graphic organizers.

I am not advocating for fill in the blank type notes where the students fill in a word from the notes being projected. Instead, provide a structured Google Document that contains graphic organizers to save students time from having to draw the charts. Provide students the tools they will need for taking the notes. Tables are great ways to organize information, in particular when graphics are needed. Put images into one cell of the table and text in the other cell to allow for text side by side with an image.

Rather than having students draw all of the graphics or other time consuming methods Google Docs has a research function built in. On the right hand side the research pane will open up. If the notes require a chart or graphic or drawing it might be quicker for them to do this on paper. Educational Technology and Mobile Learning: 15 Effective Ways to Use Google Docs in Class. June 19, 2014 I spend a considerable time every single day browsing the net tracking new updates in the world of educational technology and, often times, in the midst of this journey I would come across wonderful resources and tutorials that usually end up in one of my posts here in this blog.

How to Email Reminders from a Google Spreadsheet. Now You Can Customize Headers, Footers, and Page Numbers in Google Docs. 10 Good Google Docs, Sheets, and Forms Add-ons for Teachers. This afternoon I was asked if I could put together a list of my favorite Google Docs, Sheets, and Forms Add-ons. In the past I had put together lists of Sheets scripts, but most of those lists are outdated as Add-ons have mostly replaced scripts. Here's my updated list of my favorite Google Docs, Sheets and Forms Add-ons. Google Docs Add-ons: The Tag Cloud Generator Add-on will create a word cloud in the right-hand margin of any of your Google Documents that contain more than one hundred words. One of the most useful Add-ons for Google Documents is the EasyBib Bibliography Creator. The EasyBib Bibliography Creator makes it easy to properly cite resources and format a bibliography in APA, MLA, or Chicago style. Knowing the right keyboard shortcuts to type the accents and characters is one of the challenges that students face when learning and trying to type in a new language.

How to Create Flashcards from a Google Spreadsheet. Speech to Text in Google Documents. Last week I published a list of ten good Google Docs, Sheets, and Forms Add-ons. This week through a Tweet by Jen Deyenberg I learned of another good one to add to the list.