Welcome to the good place (online): where the aim of the game is kindness to strangers. It’s easy to forget just how significant an accomplishment the internet, with its power of connecting us, really is. 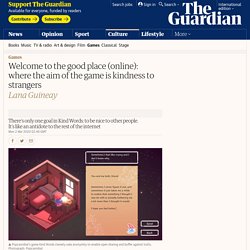 When you’re scrolling through vitriol in 280 characters or less, being trolled on forums or reading the comments, the label “toxic” can seem more apt. But there are those who believe the internet has the capacity to affect our hearts and minds for the better. Kind Words is a new multiplayer game about writing nice letters to real strangers. That’s it. And it’s a revelation. Here’s how it works: when you load the game you find your character in the cosy isometric interior of a bedroom, a lo-fi soundtrack playing in the background. In the other, you can write your own request asking for help with whatever is worrying you. There are no quests, no objectives, no puzzles or levels. The game deftly interweaves a social experience with the background feel of games like Coffee Talk, Animal Crossing, or YouTube streams like ChilledCow.

. • Lana Guineay is a writer based in Adelaide. Could vertical forests improve our cities and health? News BBC News Navigation Sections Previous Next Media player Media playback is unsupported on your device Two residential towers in Milan have over 900 trees and 11,000 plants. 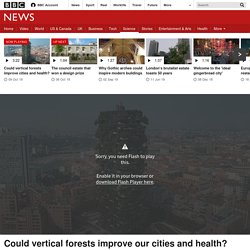 Video Could vertical forests improve our cities and health? Bosco Verticale in Milan is a pair of residential towers with over 900 trees and 11,000 plants. A UN 'World Cities' report has predicted that two thirds of us will live in cities by 2030. Digital producer: Jack Burgess Camerawork: Anand Jagatia Discover more in CrowdScience from BBC World Service. 09 Oct 2019 Go to next video: The council estate that won a design prize More On: Environment Video Top Stories More from BBC Reel Must See. US sales of guns and ammunition soar amid coronavirus panic buying. Sales of guns and ammunition are soaring across the US as fears of possible social unrest amid the coronavirus crisis are prompting some Americans to turn to firearms as a form of self-protection. 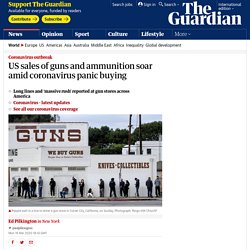 On the west coast, long lines of customers were queueing up outside gun stores to stock up on deadly materials. At the Martin B Retting gun shop in Culver City, California, the queues stretched round the block throughout the weekend. One customer told the LA Times: “Politicians and anti-gun people have been telling us for the longest time that we don’t need guns. But right now, a lot of people are truly scared, and they can make that decision themselves.” Larry Hyatt, owner of one of the country’s largest gun shops, Hyatt Guns in Charlotte, North Carolina, told the Guardian that the scenes of mass buying at his store were virtually unprecedented. “We are experiencing a massive rush to buy guns and ammunition as people feel the need to protect themselves and their families.” 'We can’t afford to shut': PM's Covid-19 advice leaves pubs and shops in limbo. A day after Boris Johnson strongly advised people to avoid pubs, clubs and theatres as part of a dramatic escalation of measures to curb the spread of coronavirus, the Guardian visited venues in three parts of the country – Rochdale, Wareham and London – to assess how closely the government’s advice was being followed and found many publicans and their customers in a defiant mood. 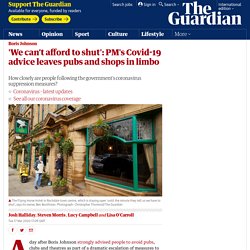 Rochdale, Greater Manchester Opposite Rochdale’s Gothic town hall, the doors of the town’s busiest and best-known pub, the Flying Horse Hotel, were defiantly open. “We will stay open until the minute they tell us we have to shut,” said its owner, Ben Boothman, 38, surveying the smattering of drinkers sat around the oak bar. Boothman announced in a stirring Facebook post on Tuesday that the pub would continue serving punters as it had done “for the last 330 years”. The pub had endured “some of humanity’s biggest threats”, he wrote. The Flying Horse would usually serve 40 meals on a Monday night. Wareham, Dorset.

'An ethical nightmare': how coronavirus turned Big Brother into a house of horrors. Forget your Zoflora-scented flat or the freshly bleached kitchen table that is now your office, or even the sealed-off hospital rooms accessible only by medical professionals in hazmat suits: the two safest places in the world to hide from the coronavirus are officially the German and Canadian Big Brother houses. 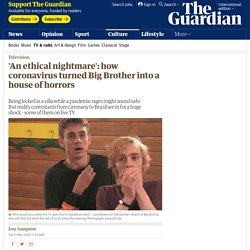 The German version of the show started on 6 February, and the contestants currently have no idea that the rest of the world is living through a pandemic because, as per the rules of the show, they are not allowed any contact with the outside world. When they went into the house, no cases of coronavirus had been confirmed outside China. And, incredibly, even though new people are entering the show all the time, they are not allowed to tell the current housemates anything. What a secret to keep! Big Brother Brazil’s cast are also completely unaware of coronavirus – since they entered the house on 21 January, producers have refused to update them on the outside world.