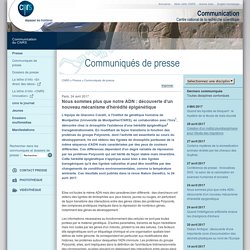 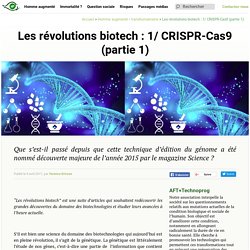 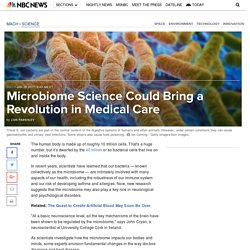 That's a huge number, but it's dwarfed by the 40 trillion or so bacterial cells that live on and inside the body. In recent years, scientists have learned that our bacteria — known collectively as the microbiome — are intimately involved with many aspects of our health, including the robustness of our immune system and our risk of developing asthma and allergies. Now, new research suggests that the microbiome may also play a key role in neurological and psychological disorders. Related: The Quest to Create Artificial Blood May Soon Be Over.

Organ regeneration. Extinct species. Fight obesity. Qu'est-ce que la bioinformatique ? Super organisms. How the Hidden Mathematics of Living Cells Could Help Us Decipher the Brain. Uk.businessinsider. Theoretical physicists have confirmed that it's not just the information coded into our DNA that shapes who we are - it's also the way DNA folds itself that controls which genes are expressed inside our bodies. 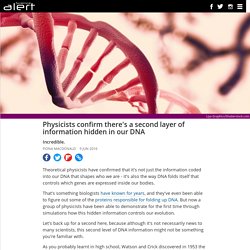 That's something biologists have known for years, and they've even been able to figure out some of the proteins responsible for folding up DNA. But now a group of physicists have been able to demonstrate for the first time through simulations how this hidden information controls our evolution. Quelle éthique pour les ciseaux génétiques. En permettant de modifier l’ADN avec une facilité déconcertante, les outils d’ingénierie génomique comme CRISPR-Cas9 ouvrent la voie à des questionnements éthiques et législatifs complexes. 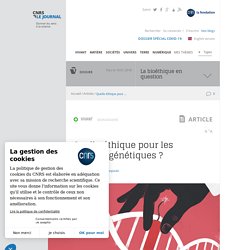 There's A Second Layer Of Information In DNA. The way A, T, G, and C are arranged in the DNA double helix determines how proteins are produced in the body of multi-celled organisms like us. 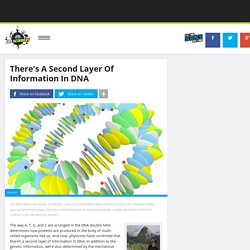 Researchers Take Steps Towards Developing A "Universal" Vaccine To Cure All Cancers. As wonder drugs go, the idea of a single medicine that can cure literally all types of cancer has got to be right up there in the “too good to be true” bracket. 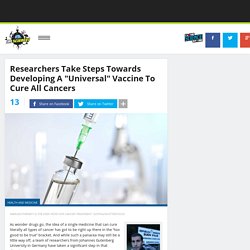 And while such a panacea may still be a little way off, a team of researchers from Johannes Gutenberg University in Germany have taken a significant step in that direction. Detailing their research in the journal Nature, the study authors explain how they managed to coax the immune system of mice into attacking and destroying a wide variety of cancer types. ?articles. At a workshop held at the National Institutes of Health (NIH) last September on the role of human microbiota in infectious disease, I was disheartened not to hear a single talk on the fungal community—the mycobiome. 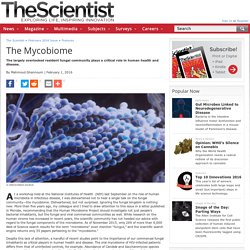 Disheartened, but not surprised. Ignoring the fungal kingdom is nothing new. How Much Does Genetics Really Affect Your Fitness? Scientists Have Genetically Engineered Micropigs To Sell As Pets. A Chinese institute known for its breakthrough in genomic sequencing is now using its pioneering gene-editing technique to create and sell micropigs as pets. 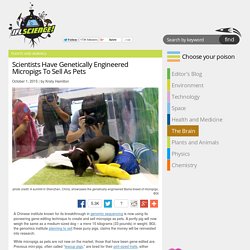 A portly pig will now weigh the same as a medium-sized dog – a mere 15 kilograms (33 pounds) in weight. BGI, the genomics institute planning to sell these puny pigs, claims the money will be reinvested into research. While micropigs as pets are not new on the market, those that have been gene-edited are. Previous mini-pigs, often called “teacup pigs,” are bred for their pint-sized traits, either through the breeding of runts or for the dwarfism gene.

Study reveals the genetic start-up of a human embryo. An international team of scientists led from Sweden's Karolinska Institutet has for the first time mapped all the genes that are activated in the first few days of a fertilized human egg. 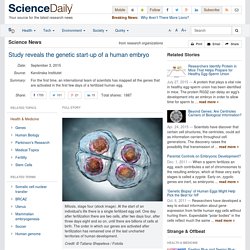 The study, which is being published in the journal Nature Communications, provides an in-depth understanding of early embryonic development in human -- and scientists now hope that the results will help finding for example new therapies against infertility. At the start of an individual's life there is a single fertilized egg cell. One day after fertilization there are two cells, after two days four, after three days eight and so on, until there are billions of cells at birth. The order in which our genes are activated after fertilization has remained one of the last uncharted territories of human development. Stem Cells. ?articles. WIKIMEDIA, LUCASMCORSOScientists have been searching for chemicals or conditions that can stimulate the activity of energy-burning brown fat as a potential means of treating obesity.

Adult humans, unlike babies and some animals, don’t have too much brown fat to work with, however. Now, researchers in Texas have found that humans—victims of extreme burn trauma, in particular—can actually convert white fat into brown fat, a phenomenon previously witnessed only in animals and in vitro models. “We think in these patients who have lost much of their skin, which normally helps keep us warm, white fat is turning into brown fat in an effort to increase the ability of the body to produce heat,” Labros Sidossis, a researcher at the University of Texas Medical Branch in Galveston who led the study, published in Cell Metabolism August 4, told Science.

Smartphone-Sized Genetic Sequencer Transcribes Entire Bacterial Genome - Singularity HUB. Scientists first transcribed the genome—or complete genetic code—of a free living organism in 1995. Sequencing the bacterium H. Influenzae took a little over a year, cost about $1 million, and required a (then) significant amount of computing power. In 1997, Escherichia coli (E. coli) similarly surrendered its genetic secrets. Less than two decades on, the entire genome of E. coli has again been sequenced. This time, however, researchers used a handheld machine the size of a smartphone. The study, led by the Ontario Institute for Cancer Research’s Dr. Eating Human Brains Drove Evolution In Remote Tribe. The practice of ritualistic mortuary cannibalism used to be common amongst the Fore peoples of Papua New Guinea. When a member of the tribe died, the women in the village used to dismember and prepare the body, which was then eaten.

They would often feed bits of the brain to the children and elderly. It was this custom of eating the brain of the deceased that is thought to have caused the epidemic in the 1950s of “human mad cow disease,” known as kuru, within the Fore peoples. Now, scientists have identified a genetic mutation that likely helped to protect the Fore against developing the illness, a type of prion disease caused by misfolded proteins. Beyond genes: are centrioles carriers of biological information?

24.04.15 - EPFL scientists discover that certain cell structures, the centrioles, could act as information carriers throughout cell generations. The discovery raises the possibility that transmission of biological information could involve more than just genes. Centrioles are barrel-shaped structures inside cells, made up of multiple proteins. They are currently the focus of much research, since mutations in the proteins that make them up can cause a broad range of diseases, including developmental abnormalities, respiratory conditions, male sterility and cancer.

Neurons Busily Rewrite Their DNA NonstopTrending. Scientists from Johns Hopkins have found that neurons are not risk-averse, if fact, they use minor "DNA surgeries" to toggle their activity levels 24/7. Since these activity levels are important in learning, memory, and brain disorders, the researchers believe their finding will shed light on several key questions.

These are images of mouse neurons from the hippocampal region of the brain. Levels of the surface receptor GluR1, orange, are shown in unmodified neurons, left, and in those with increased levels of Tet3, right. Image Credit: Huimei Yu, Johns Hopkins Medicine "We used to think that once a cell reaches full maturation, its DNA is totally stable, including the molecular tags attached to it to control its genes and maintain the cell's identity," says Hongjun Song, PhD, professor of neurology and neuroscience, Johns Hopkins University School of Medicine's Institute for Cell Engineering. BioVisions. News Highlights:CRISPR-Edited Human Embryos Raise Ruckus. Blurring an ethical line, scientists at Sun Yat-sen University in Guangzhou have used the CRISPR/Cas9 gene-editing system not on human adult cells or animal embryos, as has been done on many occasions, but on human embryos.

To date, scientists have been reluctant to edit human germline cells for fear of passing the revisions—and unknown consequences of those revisions—down to future generations. The Chinese scientists, however, advanced where others had hesitated, having taken the precaution of working with human embryos that they had deemed nonviable. If the scientists expected to escape controversy, they were mistaken. Concerns and protests have been rising since the scientists’ work appeared April 18 in the journal Protein & Cell. Dr. Scientists Convert Cancer Cells Into Harmless Immune Cells.

Laboratory studies do not often go as planned, and while this is usually a source of endless frustration amongst scientists, some wonderful discoveries have been made by accident in the past, such as the pacemaker and penicillin. Now, researchers may have happened upon something that could turn out to be a powerful agent against a particularly aggressive type of cancer. After endeavoring to find ways to prevent cancerous cells from dying during experiments, scientists from Stanford have discovered that it is possible to force leukemia cells to mature into a type of immune cell that, ironically, may help the body clear up other tumor cells.

News Highlights:Most Cancers Due to Bad Luck, Not Heredity or Lifestyle. You eat healthy, exercise regularly, and avoid toxic substances. Bioinfo_Excel. Drugs from where?! Female genitals may be source of uniquely effective antibiotic. Endurance Training Influences Gene Expression In Muscles. A Lab In South Korea Will Clone Your Dog For $100,000. MIT: Synthetic DNA Can Be Used as Ink for Nanoscale 3D Printers.

Tiniest Insect Genome Sequenced. One Injection Reverses Diabetes Symptoms Without Side Effects. Biological Pacemaker Developed Using Gene Therapy. Friends Resemble Each Other Genetically. Friends share similar DNA, study finds. Researchers Develop A Novel Method To Produce Blood Cells From Stem Cells. Designer Babies – Like It Or Not, Here They Come. Genes Play An Important Role In Shaping Chimp Intelligence. DNA Scissors Can Perform Surgery On Your Genes. A Man Was Cured Of HIV In 2008, And Hardly Anyone Knows About It.