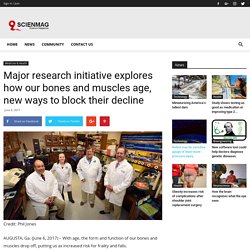 (June 6, 2017) – With age, the form and function of our bones and muscles drop off, putting us as increased risk for frailty and falls. Now researchers at the Medical College of Georgia at Augusta University are dissecting just what happens to the stem cells that make the tissues, which help keep us upright, with an eye on improving our healthspan. Osteoporosis already is a major public health problem affecting about 44 million Americans and costing billions annually. The world's older population is growing at an unprecedented rate with 8.5 percent of the worldwide population – 617 million people – age 65 and older, a proportion estimated to reach 17 percent by 2050, according to the National Institute on Aging. "After age 65 you start losing about 1 percent of both muscle and bone per year," said Dr. "Daily exercise decreases the slope of that decline. The team, which includes principal investigators bone biologist Dr.

Dan Buettner: How to live to be 100+ High levels of exercise linked to nine years of less aging at the cellular level. Despite their best efforts, no scientist has ever come close to stopping humans from aging. 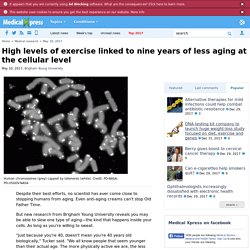 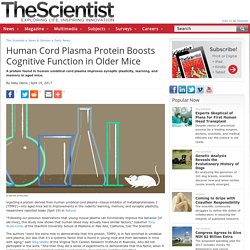 “Following our previous observations that young mouse plasma can functionally improve the behavior [of old mice], this study now shows that human blood may actually have similar factors,” coauthor Tony Wyss-Coray of the Stanford University School of Medicine in Palo Alto, California, told The Scientist. The authors “went the extra mile to demonstrate that this protein, TIMP2, is in fact enriched in umbilical cord plasma, but also that it’s a systemic factor that is found in young mice and then decreases in mice with aging,” said Greg Valdez of the Virginia Tech Carilion Research Institute in Roanoke, who did not participate in the work. 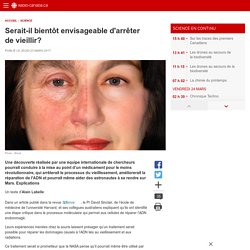 Debilities of Aging Reversed by Protein That Targets Senescent Cells. Relieved of the burden of senescent cells, we may enjoy extended healthspans—or even lifespans. 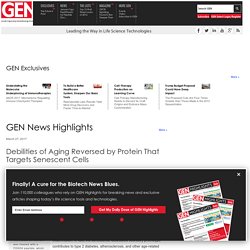 This notion was put the to the test by a team of scientists based at Erasmus University Medical Center. They selectively eliminated senescent cells in aging mice, which responded by showing a reversal of age-related loss of fur, poor kidney function, and frailty. When cells become damaged, they resort to senescence—cell cycle arrest—to avoid contributing to the proliferation of flawed cells, which can give rise to diseases such as cancer. Yet senescent cells remain metabolically active, and they secrete factors that promote inflammation. Rat-taupe nu. Un article de Wikipédia, l'encyclopédie libre. 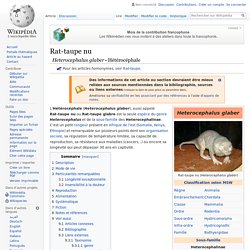 ?articles. WIKIMEDIAIn the nematode worm Caenorhabditis elegans, aging is associated with dysregulation of RNA splicing, according to a paper published on Monday (December 5) in Nature. 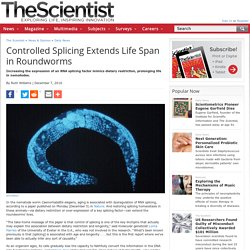 And restoring splicing homeostasis in these animals—via dietary restriction or over-expression of a key splicing factor—can extend the roundworms’ lives. “The take-home message of the paper is that control of splicing is one of the key linchpins that actually may explain the association between dietary restriction and longevity,” said molecular geneticist Lorna Harries of the University of Exeter in the U.K., who was not involved in the research. “What’s been known previously is that [splicing] is associated with age and longevity . . . but this is the first report where we’ve been able to actually infer any sort of causality.” As an organism ages, its cells gradually lose the capacity to faithfully convert the information in the DNA into functioning proteins, said William Mair of the Harvard T.H. ?articles. By tweaking four transcription factors that convert differentiated cells into pluripotent precursors, researchers report having reversed aging in mice. 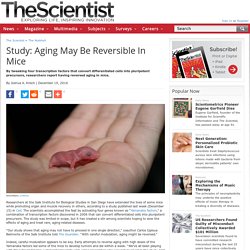 “Our study shows that aging may not have to proceed in one single direction,” coauthor Carlos Izpisua Belmonte of the Salk Institute told The Guardian. “With careful modulation, aging might be reversed.” Indeed, careful modulation appears to be key. About. Researchers Have Found a "Reset Button" for Aging Cells. In Brief Induced pluripotent stem (iPS) cells may be the key to reversing aging in hematopoietic stem cells.

The technique is also particularly useful for combating blood-related cancers and other disorders. Fighting Disease Before It Strikes From revitalizing heartbeats and increasing longevity, to removing disorders via gene editing, blood-borne challenges are approached with new solutions as quickly as we can innovate them. While many of the solutions we currently have can tackle blood disorders reactively, researchers at the University of Lunds in Sweden have devised a method that could address blood disorders proactively. Our blood changes as we age due to epigenetics, a process by which our gene expression is silenced or activated over time, without modification of the genetic code itself. Turritopsis nutricula. Un article de Wikipédia, l'encyclopédie libre. 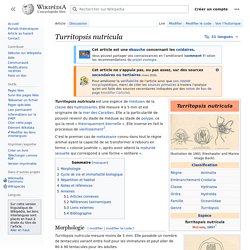 Will You Age Gracefully? Biomarker Patterns Will Tell. Just one biomarker—say, a protein found in the blood—won’t tell you whether you will enjoy disease-free aging or suffer dementia, type 2 diabetes, or some other age-related disease. Two or three biomarkers might not be enough, either. But 19 might suffice. That’s how many biomarkers figured into a panel developed by scientists based at the Boston University Medical Center. According to these scientists, the ups and downs of these 19 biomarkers settle into 26 different signatures of aging—some of which auger well, and some of which are associated with higher risks for frailty, morbidity, and mortality. This predictive exercise relies not on divination, but Big Data, a systems analysis approach.

Young blood transfusion. Avoid mitophagy. Telomere length increasing. WRN gene & protein. Will You Age Gracefully? Biomarker Patterns Will Tell. Cellular Reprogramming Rejuvenates Old Mice and Boosts Lifespans 30% The quest for the fountain of youth is as ancient as humanity itself. Now, it appears scientists may have found the source. Using a process designed to “reprogram” normal adult cells into pluripotent stem cells—cells that can transform into many different kinds of cells—researchers have managed to boost the life spans of mice by up to 30% and rejuvenate some of their tissues. The treatment did not change the cell’s genetic code, but rather chemical attachments on their DNA called epigenetic marks, responsible for regulating the genome and determining how active certain genes are.

The findings suggest that epigenetic changes are at the heart of the aging process, and offer the tantalizing possibility that those changes may be malleable and possibly even reversible. “Our study shows that aging may not have to proceed in one single direction,” Juan Carlos Izpisua Belmonte, a professor at the Salk Institute for Biological Studies in San Diego who led the research, said in a press release. Cellular Reprogramming Slows Aging in Mice. In mice carrying a mutation leading to premature aging, reprogramming of chemical marks in the genome, known as epigenetic marks, reduced many signs of aging in the mice and extended their lifespan on average from 18 weeks to 24. The study suggests that epigenetic changes drive the aging process, and that those changes may be malleable. "We did not correct the mutation that causes premature aging in these mice," says lead investigator Juan Carlos Izpisua Belmonte, a professor in the Salk Institute of Biological Science's Gene Expression Laboratory.

Aging and Death Are the Evolutionary Price of Complexity. Life’s ever-repeating cycles of birth and death are among the most fundamental principles of nature. An organism starts out as a single cell that grows and divides, develops into an embryo, matures and reaches adulthood, but then ages, deteriorates, and eventually succumbs to death. But why does life have to be cyclic, and why does it have to end in senescence and death?

After all, animals like corals and marine sponges live for thousands of years and are capable of virtually infinite regeneration and cell repair. Even in more complex animals, offspring do not inherit their parents’ age: every new generation starts with cells in a pristine state, with no trace of aging. If senescence is somehow suppressed in reproductive cells, why do the rest of the organism’s tissues end up deteriorating and dying? One Man’s Quest to Hack His Own Genes. In a dream Brian Hanley told me about, he’s riding a bus when he meets a man in dark leather clothing. Next thing he knows, he is splayed across a tilted metal bed, being electrocuted. The dream was no doubt connected to events that took place last June at a plastic surgeon’s office in Davis, California.

At Hanley’s request, a doctor had injected into his thighs copies of a gene that Hanley, a PhD microbiologist, had designed and ordered from a research supply company. Then, plunging two pointed electrodes into his leg, the doctor had passed a strong current into his body, causing his muscle cells to open and absorb the new DNA. The effort is the second case MIT Technology Review has documented of unregulated gene therapy, a risky undertaking that is being embraced by a few daring individuals seeking to develop anti-aging treatments. Hanley, 60, is the founder of a one-man company called Butterfly Sciences, also in Davis. Aging May be Reversible in Mice Trending.

One of the most well-described aging disorder is progeria. Known formally as Hutchinson-Gilford progeria syndrome, this rare genetic condition is often described as accelerated aging. Afflicted children show signs and symptoms of abnormal aging beginning in their first year of life. The skin thins and wrinkles, hair falls out, bones and joints ache, organs fail – the entire system is so fragile that affected children resemble old, aging people. Most progeria patients do not reach adulthood and can barely survive their teenage years.

?articles. HENDRIKJE AND GERT: Holstege (right) chats with 113-year-old van Andel-Schipper in 2003.COURTESY OF GERT HOLSTEGE In the 1970s, Hendrikje van Andel-Schipper, an elderly woman in the Netherlands, made the decision to donate her body to science after her death. She was in her 80s then and probably figured it wouldn’t be long before she would be able to deliver on her promise. But 30 years later, in the early 2000s, she was still going strong. Wondering if she was of any use to science at the ripe old age of 111, she called up the nearby University of Groningen, and the message got passed around to neuroscientist Gert Holstege, who says he gets the question a handful of times a year, most often when a person who’s donated her body to science becomes ill. Longer Life in a Pill May Already Be Available at Your Local Drug Store.

To most of the scientific community, “anti-aging” is a dirty word. A medical field historically associated with charlatans and quacks, scientists have strictly restricted the quest for a “longevity pill” to basic research. The paradigm is simple and one-toned: working on model organisms by manipulating different genes and proteins, scientists slowly tease out the molecular mechanisms that lead to — and reverse — signs of aging, with no guarantee that they’ll work in humans. But it’s been a fruitful search: multiple drug candidates, many already on the market for immune or psychiatric disorders, have consistently delayed age-associated diseases and stretched the lifespan of fruit flies, roundworms and mice.

Yet human trials have been far beyond reach — without the FDA acknowledging “aging” as a legitimate target for drug development, researchers have had no way of pitching clinical trials to the regulatory agency. Until now. A Sea Change. Turning Back the Aging Clock. Researchers from Caltech and UCLA have developed a new approach to removing cellular damage that accumulates with age. Pourquoi vieillissons-nous? ?articles. The Ageing Process, as Played Out by Our Cells Video. We need no formal reminder of the inevitable ageing process – a quick glance at the skin of a young child and the skin of an adult is enough. Why the Human Lifespan Ends at 122. Study results advance ‘transposon theory of aging’

Nourishing the Aging Brain. Venter's Human Longevity Project - Academic vs. Private Genomics Round 2? Cynthia Kenyon: Experiments that hint of longer lives. Dan Buettner: How to live to be 100+ Emma Teeling: The secret of the bat genome. Anti-Aging Study Sees Much-Needed Affirmation. Penn Yeast Study Identifies Novel Longevity Pathway. Australian and US scientists reverse ageing in mice, humans could be next. Cellular Aging: Telomeres – FREE Cellular Aging: Telomeres information. Against the Biological Clock — A Gameplan to End Age-Related Diseases. Why Do We Age?