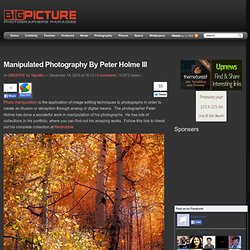 The photographer Peter Holme has done a wonderful work in manipulation of his photographs. He has lots of collections in his portfolio, where you can find out his amazing works. Follow this link to check out his complete collection at Redbubble. Фотограф Peter Holme. Innocence_and_hope by Letizia Falini. Sign up for Free now! Login Fechar Lost password? ► Close Lost password ▼ Lost username? Close Lost username ▼ Photo Galleries, Photos, Pictures, Wallpapers, Photography. A stroll through my soul. George Steinmetz Aerial Photography - Desert Air. Favorites. Photos Community Come on in! 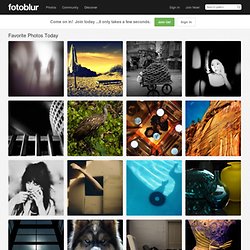 Join today ...it only takes a few seconds.Join Us! Sign In. Photo Gallery by Kuki Walsch. Photos Community Come on in! 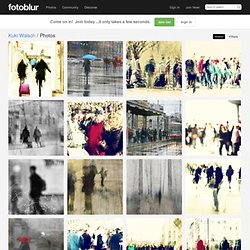 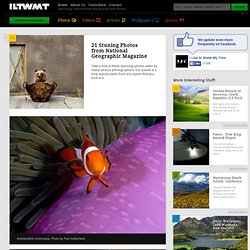 Our planet is a truly special place, from any aspect that you look at it. Anemonefish (Indonesia). Photo by Paul Sutherland. Serene Beauty of Moravia, Czech Republic [15 Pics] May 23 2012 Rich with both history and natural beauty – Moravia has got to be one of the most beautiful prairie style places in the world! 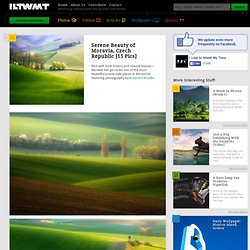 Creative,photoart. Wird - photographers from whole world. Solitude and Silence. Solitude is the profoundest fact of the human condition. 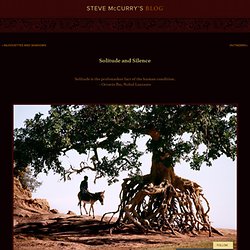 . – Octavio Paz, Nobel Laureate Mali Language… has created the word “loneliness” to express the pain of being alone And it has created the word “solitude” to express the glory of being alone. India We live, in fact, in a world starved for solitude, silence, and private: and therefore starved for meditation and true friendship. To Be Human. Conversations are at the heart of what it means to be human.- Theodore Zeldin Rajasthan, India A boy listens as the elders talk at a traditional wedding festival. 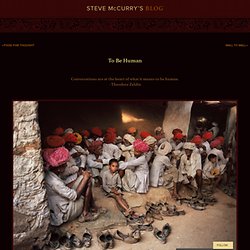 India The character of a man is known from his conversations.Menander (342 BCE – 292 BCE) Tibet The most fruitful and natural exercise for our minds is, in my opinion, conversation.- Michel de Montaigne, The Essays: A Selection Père Lachaise Cemetery, Paris. Carla Mascaro. 19.03.2012 in20:31 in Creative,photoart --> 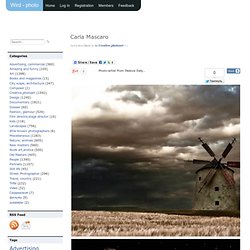 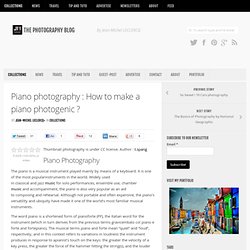 5.00/5 (100.00%) 2 votes Thumbnail photography is under CC license. Author : t.spang The piano is a musical instrument played mainly by means of a keyboard. It is one of the most popularinstruments in the world. The word piano is a shortened form of pianoforte (PF), the Italian word for the instrument (which in turn derives from the previous terms gravicembalo col piano e forte and fortepiano). 20 Cool Pictures of Earth from Space.

20 cool pictures of Earth from Space thanks to National Geographic and a collection of amazing photographers. 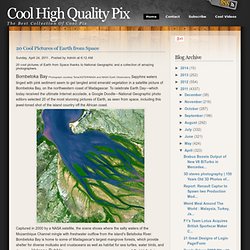 Bombetoka BayPhotograph courtesy Terra/ASTER/NASA and NASA Earth Observatory Sapphire waters tinged with pink sediment seem to get tangled amid emerald vegetation in a satellite picture of Bombetoka Bay, on the northwestern coast of Madagascar. To celebrate Earth Day—which today received the ultimate Internet accolade, a Google Doodle—National Geographic photo editors selected 20 of the most stunning pictures of Earth, as seen from space, including this jewel-toned shot of the island country off the African coast.

Captured in 2000 by a NASA satellite, the scene shows where the salty waters of the Mozambique Channel mingle with freshwater outflow from the island's Betsiboka River. Bombetoka Bay is home to some of Madagascar's largest mangrove forests, which provide shelter for diverse mollusks and crustaceans as well as habitat for sea turtles, water birds, and dugongs. Alain Etchepare photographs. Breathtaking Black and White Landscape Photography. This is a collection of Black and White photos of nature landscapes. Many people think that nature cannot look as breathtaking as it does in colored pictures.

I made this post to prove them wrong. Nature can look even better if the photographer knows how to shoot it. And as you know, many photography awards only accept Black and White photographs for nominations. » Les merveilles de la nature: le photographe Mikko Lagerstedt. Marie d'Abrigeon - Veredit - photographic - poems © Tale of one city: almost one million never-before-seen photos of New York released. Image: AP Photo/New York City Municipal Archives, Department of Bridges/Plant & Structures, Eugene de Salignac THE CITY OF New York has released to the public almost one million never-before-seen photographs, chronicling life on its streets over the past 100 years.

The city’s Department of Records officially announced the debut of the photo database Tuesday. A previously unpublicised link to the images has been live for about two weeks for maintenance and testing. Culled from the Municipal Archives collection of more than 2.2 million images going back to the mid-1800s, the photographs feature all manner of city oversight — from stately ports and bridges to grisly gangland killings. The project was four years in the making, part of the department’s mission to make city records accessible to everyone, said department assistant commissioner Kenneth Cobb. Change the world one photo at a time.

Incredible Space Pics from ISS by NASA astronaut Wheelock. Go Discovery! It was October 23, 2007 at 11:40am EST when I had my first ride to space on Discovery. She’s beautiful… just sad that this will be her last voyage. Looking forward to climbing aboard the flight deck when Discovery arrives at the Space Station in November. (9-23-2010). Incredible Photos from Space: Larry Tanner, NASA. Special thanks: Bethbeck’s blog On September 22, 2010, with the departure of the Expedition 23 crew, Colonel Douglas H. We thought that we should put some of the space photos together as a tribute to him and the whole ISS crew. The following space photos are all visible on Astro_Wheels’ twitpic account, and we are eternally grateful to him for sharing these space photos with the world.

Incredible Photos from Space: ‘Earthshine’… The Space Station basking in blue Earthshine as the rising sun pierces our razor-thin atmosphere to cover the Space Station with blue light. NASA astronaut Douglas H. JULIE DE WAROQUIER ♦ Photographer - HOME. 50 More Photos That Will Blow Your Mind. These 50 Photos Will Blow you Away.

Cntower_timelapse.swf (Objet application/x-shockwave-flash) In Focus - National Geographic Photo Contest 2011. National Geographic is currently holding its annual photo contest, with the deadline for submissions coming up on November 30. For the past nine weeks, the society has been gathering and presenting galleries of submissions, encouraging readers to vote for them as well. National Geographic was kind enough to let me choose among its entries from 2011 for display here on In Focus.

Gathered below are 45 images from the three categories of People, Places, and Nature, with captions written by the individual photographers. [45 photos] Use j/k keys or ←/→ to navigate Choose: Many people pilgrimage to Uluru, but what is seen there often depends on where you've come from. Incredible Wildlife Photography. Wildlife — By Stephanie on January 11, 2010 at 10:58 am. Yann Arthus-Bertrand. Xavier Zimbardo, la puissance de l'art.