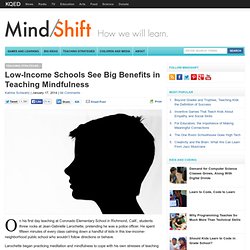 He spent fifteen minutes of every class calming down a handful of kids in this low-income-neighborhood public school who wouldn’t follow directions or behave. Larochette began practicing meditation and mindfulness to cope with his own stresses of teaching and supporting traumatized kids. He believed the breathing techniques that helped calm his fears might work for his students too, so he founded the Mindful Life Project. Restorative Justice: Resources for Schools. Restorative justice empowers students to resolve conflicts on their own and in small groups, and it's a growing practice at schools around the country. 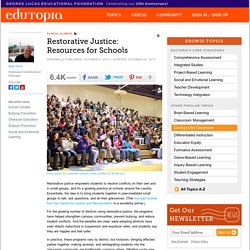 Essentially, the idea is to bring students together in peer-mediated small groups to talk, ask questions, and air their grievances. (This four-part tutorial from the Centre for Justice and Reconciliation is a wonderful primer.) For the growing number of districts using restorative justice, the programs have helped strengthen campus communities, prevent bullying, and reduce student conflicts. And the benefits are clear: early-adopting districts have seen drastic reductions in suspension and expulsion rates, and students say they are happier and feel safer. In practice, these programs vary by district, but inclusion, bringing affected parties together, making amends, and reintegrating students into the classroom community are traditionally common pillars. Restorative Justice: Guides for Successful Implementation Ypislanti High School. The 3 A's of awesome - Neil Pasricha. Morningside Center for Teaching Social Responsibility. The Power of the Morning Meeting: 5 Steps Toward Changing Your Classroom and School Culture.

"The whole morning meeting not only sets a really good tone for the students, but it sets a tone for me. 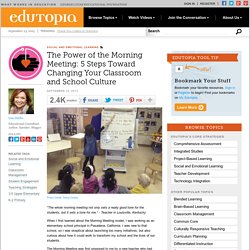 " - Teacher in Louisville, Kentucky When I first learned about the Morning Meeting model, I was working as an elementary school principal in Pasadena, California. I was new to that school, so I was skeptical about launching too many initiatives, but also curious about how it could work to transform my school and the lives of our students. The Morning Meeting was first proposed to me by a new teacher who had studied it in her pre-service classes. She explained that the model was designed to: Set the tone for respectful learningEstablish a climate of trustMotivate students to feel significantCreate empathy and encourage collaborationSupport social, emotional and academic learning She had me at "respectful learning! " Brainology Program - Mindset Works®: Student Motivation through a Growth Mindset, by Carol Dweck, Ph.D. Welcome > Brainology Program Brainology® raises students’ achievement by helping them develop a growth mindset. 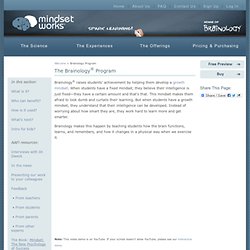 When students have a fixed mindset, they believe their intelligence is just fixed—they have a certain amount and that’s that. This mindset makes them afraid to look dumb and curtails their learning. But when students have a growth mindset, they understand that their intelligence can be developed. Instead of worrying about how smart they are, they work hard to learn more and get smarter. Brainology makes this happen by teaching students how the brain functions, learns, and remembers, and how it changes in a physical way when we exercise it. Note: This video demo is on YouTube. Brainology shows students that they are in control of their brain and its development. Who can benefit?

Video: Cookie Monster Sings — I Kid You Not — About Self Regulation. In what is undoubtedly the first time the expression “self-regulate” has been sung on a music video, Sesame Street has put out a music video spoofing “Icona Pop’s hit song “I Love It”" (which I’ve never heard of — a sad commentary on my awareness of pop culture). 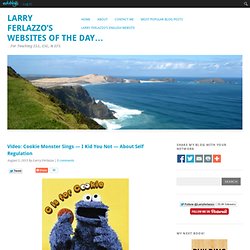 The Cookie Monster sings about the importance of self-control, and is kicking-off what is a new Sesame Street curriculum on that life skill. It’s a fun song, and I can certainly see myself showing it to end the self-control lesson in my book, Helping Students Motivate Themselves. Ninth-graders would find it silly enough to be cool. Interestingly enough, a year or two ago the PBS News Hour did a fabulous segment with Sesame characters on self control, which you can find here. My students really liked it. CyberMentors - Resources - UK films - Let's fight it together. StopBullying.gov. 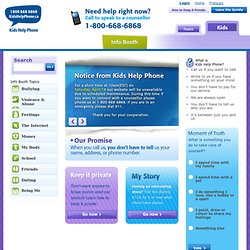 Call to speak to a counsellor : 1-800-668-6868 What isKids Help Phone? Call us if you want to talk Write to us if you have something on your mind You don’t have to pay for our service We are always open You don’t have to tell us who you are It’s between just you and us Moment of Truth What is something you do to take care of yourself? Previous Next Go Now Go Now Info Booth Topics. Team Building Activities, Initiative Games & Problem Solving Exercises.

Upstander Alliance. How often do we watch a television show, see a play, hear a song, or go to the movies and think: “Hey, I can relate to that”. 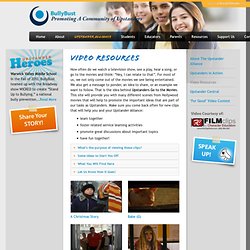 For most of us, we not only come out of the movies we see being entertained. We also get a message to ponder, an idea to share, or an example we want to follow. That is the idea behind Upstanders Go to the Movies. This site will provide you with many different scenes from Hollywood movies that will help to promote the important ideas that are part of our tasks as Upstanders.