'This Was a $69 Million Marketing Stunt': Why Crypto Purists Say Beeple's Mega-Millions NFT Isn't Actually an NFT at All. Beeple’s Everydays – The First 5,000 Days obliterated records and expectations when it sold at Christie’s for a hallucinatory $69.3 million on March 11. 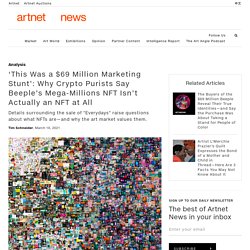 But the piece, billed as the first “purely digital work with a unique NFT (non-fungible token)” to be sold by a major auction house, also cracked open a contentious debate about what, exactly, qualifies as an NFT, why those characteristics matter, and how much bearing they have on the pandemonium suddenly dominating the market for contemporary art and so much else. The tension emerged shortly after a week of thunderous bidding for Everydays ended with a sonic boom last Thursday morning.

Kelani Nichole, who first priced and sold artworks in bitcoin in 2013 as the owner of the new-media-centric Transfer Gallery, took to the private Discord server Friends With Benefits early that afternoon to call attention to what she saw as unusual behavior in the life cycle of Beeple’s headline-snatching token. We Are What We Do Jussi Pylkkanen. Dezeen. A collage by American artist Beeple has become the most expensive digital image ever, with the blockchain-verified artwork fetching over $69 million at auction. 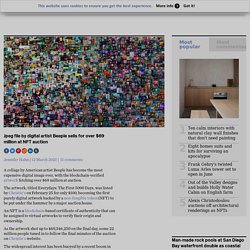 The artwork, titled Everydays: The First 5000 Days, was listed by Christie's on February 25 for only $100, becoming the first purely digital artwork backed by a non-fungible token (NFT) to be put under the hammer by a major auction house. An NFT is a blockchain-based certificate of authenticity that can be assigned to virtual artworks to verify their origin and ownership. As the artwork shot up to $69,346,250 on the final day, some 22 million people tuned in to follow the final minutes of the auction on Christie's website. The widespread interest has been buoyed by a recent boom in crypto art, or what Wired is calling an "NFT gold rush" not unlike the Bitcoin bubble.

"The beginning of the next chapter in art history" "With NFTs that has now changed. Beeple sold an NFT for $69 million. Until October, the most Mike Winkelmann — the digital artist known as Beeple — had ever sold a print for was $100. 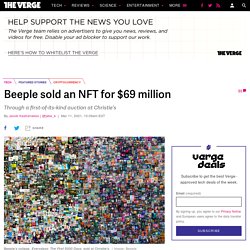 Today, an NFT of his work sold for $69 million at Christie’s. The sale positions him “among the top three most valuable living artists,” according to the auction house. The record-smashing NFT sale comes after months of increasingly valuable auctions. Beeple (b. 1981), EVERYDAYS: THE FIRST 5000 DAYS. Beeple Everydays NFT Sells at Christie's Auction for $69 Million in Ether. On Thursday, a digital artwork less than a month old hammered for $60.25 million at Christie’s in New York, shattering every previous record set for the medium and pushing the NFT market into the price range of blue-chip masterworks. 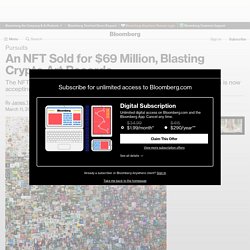 With buyer’s premium the total comes to $69 million. Justin Sun, founder of cryptocurrency platform Tron is the buyer. A representative for Tron confirmed Sun’s bid at $60.25 million, which is the hammer price. Christie’s declined to confirm the buyer, but prior to the sale, Davis said that “there have been a handful of really dogged, really serious clients pursuing it, and they are mostly people who are very steeped in crypto. “Whether that means they’re early investors in crypto, or they run and operate businesses that have significant investment in crypto technology,” he continued, “they’re all very savvy, ‘#online’ people.”

Sun is known as a marketer who has made splashes by spending large sums of money before. The Artwork. Beeple: A Visionary Digital Artist at the Forefront of NFTs. Beeple’s evolution: the First 5000 Days in five key pictures ‘This was my very first everyday. 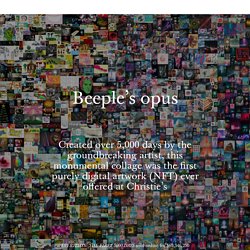 It’s a picture of my Uncle Jim, who I nicknamed Uber Jay. I probably would have spent more time on this, had I known it would eventually be part of a piece auctioned by Christie’s!’ ‘I did this image very quickly, in about three minutes at 5am, right before driving my wife to the hospital to have our first child.’ ‘This is a picture from when I had horrible food poisoning. ‘This was done in about an hour immediately after the 2020 vice-presidential debate, when then US Vice President Mike Pence had a fly unexpectedly land on his head. ‘I made this on the 5,000th day. Kevin Buist on the NFT boom. March 10, 2021 • Kevin Buist on the NFT boom ON MARCH 11, Christie’s will make history as the first traditional auction house to complete a sale of a purely digital artwork, authenticated on a blockchain, payable in cryptocurrency. 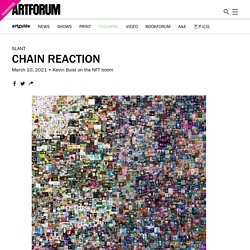 The single lot sale consists only of EVERYDAYS: THE FIRST 5000 DAYS by the artist known as Beeple, real name Mike Winkelmann. The image file, a whopping 21,069 x 21,069 pixels, is really five thousand individual images tiled into a dense mosaic, the result of a feat of creative endurance in which Beeple created a new digital drawing each day over thirteen years, originally sharing them to his Instagram, which is currently followed by nearly two million people. Beeple’s sudden commercial success is part of an explosion of interest and ballooning prices in the crypto art market. Crypto art can be anything, but it usually takes the form of a digital image or video file. Vendre un tweet 2,1 millions d’euros, des vidéos pour cinq millions : les NFT, nouvel eldorado numérique ?

You can buy jack dorsey's first-ever tweet as a NFT but the bid is high. The World's First 'Major' NFT Art Exhibition Is About to Take Place in Beijing, Headlined by Beeple, Fewocious, and Mad Dog Jones. Get ready for the world’s first NFT art exhibition, coming to the UCCA Center for Contemporary Art in Beijing. 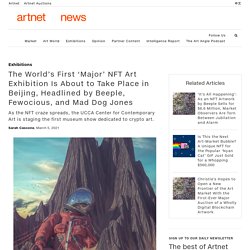 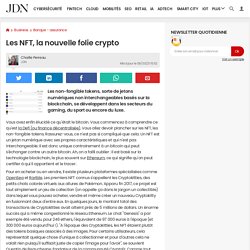 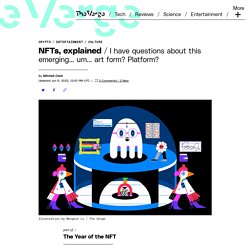 That’s the feeling I’ve experienced while reading about Grimes getting millions of dollars for NFTs or about Nyan Cat being sold as one. You might be wondering: what is an NFT, anyhow? After literal hours of reading, I think I know. I also think I’m going to cry. Non-fungible token. That doesn’t make it any clearer. What is an NFT, and why is the non-fungible art marketplace worth millions? A $95K Banksy artwork has been set on fire and turned into an NFT. A sudden, insatiable thirst for cryptoart has seized the art world. 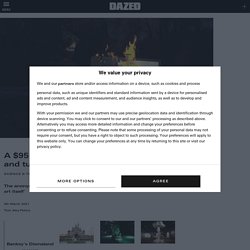 Earlier this week, Grimes pocketed almost $6 million after auctioning off several pieces of original digital artwork, while in February Miami-based art collector Pablo Rodriguez-Fraile sold an NFT for $6.6 million – 100 times more than the $66,666 he acquired it for in October. And now a blockchain company has physically destroyed a piece of art by Banksy in order to make its existence completely digital. Injective Protocol reportedly paid $95,000 for the Banksy artwork titled Morons (White), which features an auction for a painting that reads, “I can’t believe you morons actually buy this sh*t”.

The group of self-proclaimed “tech and art enthusiasts” then proceeded to set the piece on fire and livestream the destruction through the Twitter account BurntBanksy. What is cryptoart, how much does it cost and can you hang it on your wall? Pat, I keep hearing references to cryptoart which are all very … cryptic. What is this thing? Hey Lucy! So you might have heard of it in context of the $US600,000 Nyan Cat gif or the more recent Kings of Leon NFT Album, both of which are examples of cryptoart. Cryptoart is a way of making digital art unique, and therefore – according to some people – valuable. Normally, digital art is very easy to replicate due to the very nature of digital information.

Foundation. Fine art print - crypto art. Think how valuable the original YLAMBO & MDAV are?! It is definitely exciting to think of the value of things, but what's given is that people are now actively interested in crypto art. We see some that spend a lot of money on art and other things related to blockchain technology. It will be hard to break the record of neon sculpture, or 'Forever Rose' (1st NFT sold for $1 Mio) or recent sale of digital punk for $1.2 Mio. Les NFT révolutionnent Ethereum - Ce gribouillage du créateur de « Rick and Morty » adjugé 290 000 $ L’art ne connaît aucune limite – L’engouement autour des NFT et de l’art décentralisé ne cesse d’augmenter.