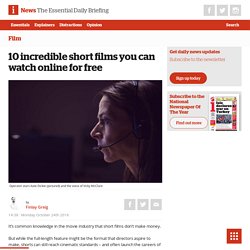 But while the full-length feature might be the format that directors aspire to make, shorts can still reach cinematic standards – and often launch the careers of their creators. When a Scroll is Really a Scroll. Saturday, 07 July 2012 12:22 Beth Thornton Today, many of us scroll through tens or hundreds of pages of content each day. 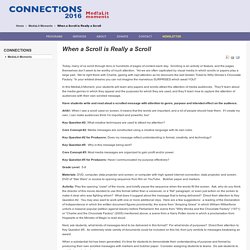 Scrolling is an activity or feature, and the pages themselves don’t seem to be worthy of much attention. Human rights, conflict resolution and tolerance education teacher toolkit. Social media: why thirteen? – Mr. Hill's Musings. Those of you who follow my blog or know me professionally know that I love technology and that I’m a big believer in its ability to transform learning. 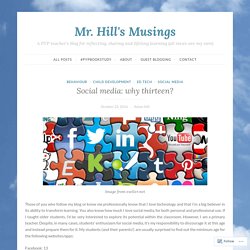 You also know how much I love social media, for both personal and professional use. If I taught older students, I’d be very interested to explore its potential within the classroom. However, I am a primary teacher. Despite, in many cases, students’ enthusiasm for social media, it’s my responsibility to discourage it at this age and instead prepare them for it. CriticalThinkingTest-Questions. California Today: How Do Top Newspapers Line Up on the Election? The effect is also likely amplified on questions further down the ballot, Dr. 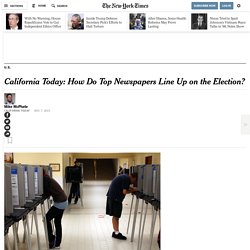 Knight said. For Californians overwhelmed by 17 statewide initiatives, along with choices on everything from school board candidates to complicated stadium plans, guidance from a newspaper can go a long way. We took a look at how six of the state’s leading newspapers by number of subscribers — The San Diego Union-Tribune, The Orange County Register, The Los Angeles Times, The Mercury News, San Francisco Chronicle and The Sacramento Bee — lined up on some propositions. Log In. SAM-MediaBias. Educational documentary films. Museums Are Embracing Selfies, Social Media, and Virtual Reality. Earlier this year, at the Whitney Museum of American Art, in New York, visitors paraded through the fifth floor to see a retrospective dedicated to the abstract expressionist Frank Stella. 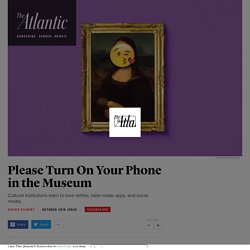 Although many of the works on display were four or five decades old, in some ways the show felt tailor-made for the Instagram age: a riot of vibrant colors and textures, 20-foot-long reliefs, and sculptures as jagged and dynamic as 3-D graffiti. Visitors one busy Saturday afternoon stopped in front of artworks, lined up shots on their phones, snapped a few photos, and then moved on to the next piece.

Some paused briefly to consider a particular painting; more stared down at their screens, furiously filtering. Three touching seasonal videos to show in your class - DreamreaderDreamreader. I recently shared a post for Language Teaching Professionals entitled ‘Three awesome seasonal TV commercials to spark discussions in your classes’. 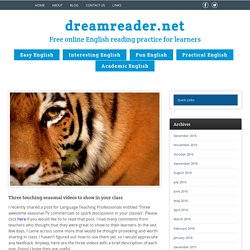 Please click here if you would like to to read that post. I had many comments from teachers who thought that they were great to show to their learners. In the last few days, I came across some more that would be thought provoking and worth sharing in class. I haven’t figured out how to use them yet, so I would appreciate any feedback. Google. FNST 360 ENGL 360 Intersession 2012. We need to talk about the online radicalisation of young, white men. Is Donald Trump racist? Chimamanda Ngozi Adichie v R Emmett Tyrrell - BBC Newsnight. How daunting is taking on the costume design for a film called &apos;The Dressmaker&apos;? Very.

“The Dressmaker” is a 1950s black comedy of revenge directed by Jocelyn Moorhouse. 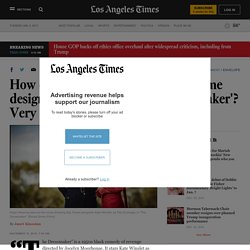 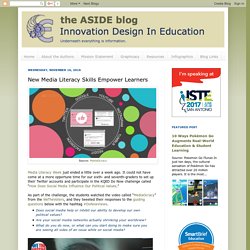 It could not have come at a more opportune time for our sixth- and seventh-graders to set up their Twitter accounts and participate in the KQED Do Now challenge called “How Does Social Media Influence Our Political Values.” As part of the challenge, the students watched the video called “MediaOcracy” from the WeTheVoters, and they tweeted their responses to the guiding questions below with the hashtag #DoNowViews.

How to be Digitally Literate in an Era of Fake News. Courtesy of PEW Research America just completed an especially volatile and polarizing Presidential election. 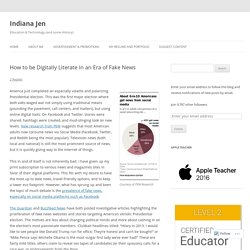 This was the first major election where both sides waged war not simply using traditional means (pounding the pavement, call centers, and mailers), but using online digital tools. Youth and media: Equip them to challenge unhealthy messages. Draw from media literacy and media activism approaches to help kids develop a critical consciousness about media messages. 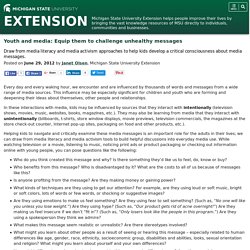 Posted on June 29, 2012 by Janet Olsen, Michigan State University Extension Every day and every waking hour, we encounter and are influenced by thousands of words and messages from a wide range of media sources. This influence may be especially significant for children and youth who are forming and deepening their ideas about themselves, other people and relationships. In these interactions with media, kids may be influenced by sources that they interact with intentionally (television shows, movies, music, websites, books, magazines, etc.). They may also be learning from media that they interact with unintentionally (billboards, t-shirts, store window displays, movie previews, television commercials, the magazines at the store check-out counter, Internet pop-up sites, packaging on food and other products, etc.). Media Literacy Education Musings from Faith Rogow, Media Literacy Education Maven. NCSS Position Paper on Media Literacy Approved – Project Look Sharp.

ITHACA, NY- Dec. 1, 2016- The National Council for the Social Studies (NCSS) approved an official Position Paper on Media Literacy in June of 2016. The paper was written by Chris Sperry, Project Look Sharp’s Director of Curriculum and Staff Development along with Frank Baker of the Media Literacy Clearinghouse. The position paper discusses how social studies educators can use images and videos to teach media literacy analysis to students. The NCSS is an organization that is devoted solely to social studies education through engaging and supporting educators throughout all 50 states, the District of Columbia and 69 foreign countries. Visual Literacy in the Language Curriculum – VIsual Arts Circle. To inaugurate the website of the Visual Arts Circle we have invited Dr. Sylvia Karastathi of New York College, Athens, Greece who has a PhD and post-doctoral studies from the University of Cambridge, to write about the increasing important role of visual literacy in English language teaching.

Few language teachers can claim that they never use still or moving images in their lessons; yet, this standard practice is rarely touched upon in teacher training curricula on the assumption the way to introduce images into lessons is self-evident. This short article starts by introducing some key ELT resources on using images in the classroom; it then goes on to argue that we need to approach images not simply as an aid but as a key component of “multimodal communicative competence”. The Status of the Image Images have long been a source of instructional material in English language teaching. Multiliteracies Pedagogy. Three awesome seasonal TV commercials to spark discussions in your classes. K-12 & Higher Ed. Media Literacy Lesson Plans. How To Teach Media Literacy. Five tips for using authentic video in the classroom. How can teachers use video content that isn't designed especially for language learners?

Google is not ‘just’ a platform. It frames, shapes and distorts how we see the world. Did the Holocaust really happen? Media literacy: not just for big kids. Parents and early childhood educators can help young children learn to analyze and evaluate media messages. K-12 & Higher Ed. Media Literacy Lesson Plans. Mediawise Society » Minciună fără ezitare: politica post-truth. The media stoke up racism on purpose. It’s our duty to point that out. A team of journalists at Newsela are fighting media illiteracy by writing news just for kids in schools to improve literacy — Quartz. 246371e. Modulo bricks. Materials – BRICkS.