The Most Influential Images of All Time 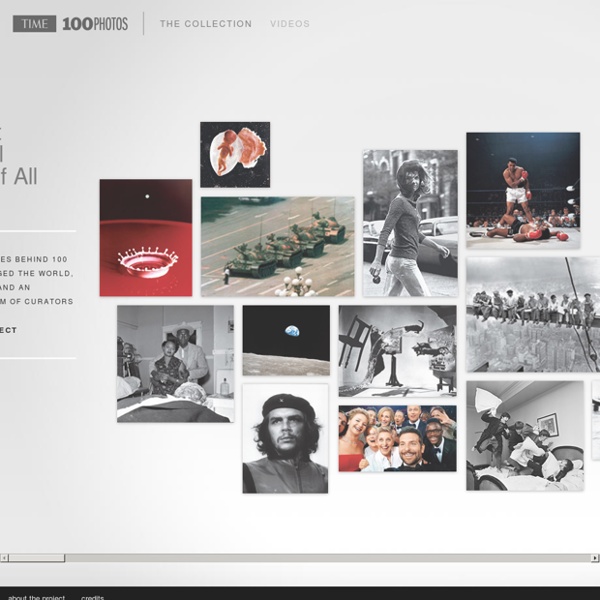 Digital Photography An introduction to the scientific, artistic, and computing aspects of digital photography. Topics include lenses and optics, light and sensors, optical effects in nature, perspective and depth of field, sampling and noise, the camera as a computing platform, image processing and editing, and computational photography. We will also survey the history of photography, look at the work of famous photographers, and talk about composing strong photographs. This course is based on CS 178 (Digital Photography), which I taught at Stanford from 2009 through 2014.

Comedy pet photography competition will pull at your heartstrings Cape Town - Following the success of the Comedy Wildlife Photography Awards, wildlife photographer Paul Joynson-Hick MBE and Tom Sullam have launched the inaugural Comedy Pets Photography Award. SEE: PICS: Comedy Wildlife Photo Awards finalists will make your day! For the dogs The competition is to find the funniest photos of pets from across the globe. The Comedy Pet Photography Awards are calling on pet-lovers the world over to enter snaps of their comical pets to be in the running to win a £2,000 cash prize, a Think Tank camera bag and £100 gift voucher from Wex Photographic.

Photography – Art Term A photograph can be either a positive or negative image. Most photographs are created using a camera, which uses a lens to focus an object’s visible wavelengths (the light reflected or emitted from it) into a reproduction on a light-sensitive surface of what the human eye would see. The word photograph was coined in 1839 by Sir John Herschel and is based on the Greek word ‘phos’, meaning ‘light’, and ‘graphê’, meaning ‘drawing’ – so ‘drawing with light. Types of photography: Non-digital vs. digital Non-digital photographs are produced using a two-step chemical process: light-sensitive film captures a negative image (colors and lights/darks are inverted) from which a positive image can be made by transferring the negative onto photographic paper (printing). The advent of digital photography has led to the rise of digital prints.

Magical Landscape Silhouette Painted Rocks for a Rock Hunt - Adventure in a Box Decorate rocks with elegant landscape silhouettes drawn over a starry twilight sky! This summer has brought a new artistic trend into the spotlight. Some of my friends have been going on treasure hunts, looking for painted rocks! The idea is to gather rocks, decorate them in a creative way, then hide them in nature. Some cities have local groups where participants post clues as to where their rocks can be found, and others just do it as a way to give a nice surprise to someone. It’s all very simple and innocent, but I love the elements of creativity, adventure and nature exploring related to this pastime!

Six Top Sources for Free Images, Video, and Audio I’ve written about a number of video, audio, and collage creation tools, with WeVideo, Audacity, and PicMonkey topping some of my lists. However, it can be a challenge for students to locate copyright-friendly media when using these tools for presentations or idea sharing. It’s always best for students to create materials or use ones that are in the public domain. ExifTool by Phil Harvey Read, Write and Edit Meta Information! Also available --> Utility to fix Nikon NEF images corrupted by Nikon software ExifTool is a platform-independent Perl library plus a command-line application for reading, writing and editing meta information in a wide variety of files. ExifTool supports many different metadata formats including EXIF, GPS, IPTC, XMP, JFIF, GeoTIFF, ICC Profile, Photoshop IRB, FlashPix, AFCP and ID3, as well as the maker notes of many digital cameras by Canon, Casio, DJI, FLIR, FujiFilm, GE, GoPro, HP, JVC/Victor, Kodak, Leaf, Minolta/Konica-Minolta, Motorola, Nikon, Nintendo, Olympus/Epson, Panasonic/Leica, Pentax/Asahi, Phase One, Reconyx, Ricoh, Samsung, Sanyo, Sigma/Foveon and Sony. ExifTool is also available as a stand-alone Windows executable and a MacOS package: (Note that these versions contain the executable only, and do not include the HTML documentation or other files of the full distribution above.) The stand-alone Windows executable does not require Perl.

15 Days Ayurveda, Meditation and Yoga Retreat Kerala - BookYogaRetreats.com Vedic way of wellness can be explored at Fragrant Nature Resorts Ayurveda spas in its purity. From its own certified farms comes pesticide free, nutrient balanced food produces that at the kitchens turn to great flavors. This is Fragrant Nature, striving to serve novel experiences.

Claude Monet's Garden 1st grade My first graders are studying Claude Monet right now! First we watched a cute video (below) to learn about the artist Then we drew the garden and the Japanese bridge with oil pastels on watercolor paper. Students had to use three different shades of green, have lily pads that begin large at the bottom of the page and get smaller as they go up the page. The lilies can be any color, detailed or blobs. We used cool colors for the water, plants, and tree reflections. I use liquid watercolors because they are the BEST!!