Commas and Coordinating Conjunctions. I am going to start this discussion of commas by showing a simple pattern of comma use: Some educators believe in using inductive methods in the classroom, and others maintain that a ‘top-down’ approach is more effective. 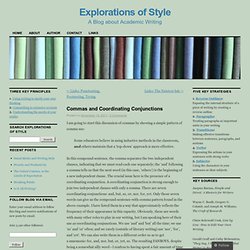 Now that we understand this simple pattern of comma use in compound sentences, we can look at some related comma errors. One such error is the comma splice: the placement of two independent clauses together with a comma and NO conjunction whatsoever. 1. 2. 3. Like this: Like Loading... SCHOPENHAUERS 38 STRATAGEMS, OR 38 WAYS TO WIN AN ARGUMENT. Arthur Schopenhauer (1788-1860), was a brilliant German philosopher.

These 38 Stratagems are excerpts from "The Art of Controversy", first translated into English and published in 1896. Carry your opponent's proposition beyond its natural limits; exaggerate it. The more general your opponent's statement becomes, the more objections you can find against it. The more restricted and narrow his or her propositions remain, the easier they are to defend by him or her. Use different meanings of your opponent's words to refute his or her argument. (abstracted from the book:Numerical Lists You Never Knew or Once Knew and Probably Forget, by: John Boswell and Dan Starer) This Sentence Has Five Words.

Exercises for Fiction Writers - Page 2. Jabberwocky. 20 awesomely untranslatable words from around the world. Translation Telephone. Synonym Finder & Find synonyms, antonyms & definition for (almost)... ‪Typography about language by Ronnie Bruce‬‏ Taxonomy of the Logical Fallacies. How Swearing Works" According to the "Hitchhiker's Guide to the Galaxy," the most offensive word in the universe is "Belgium. 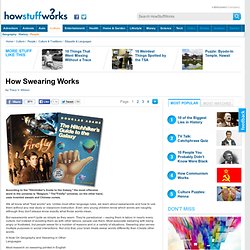 " The"Firefly" universe, on the other hand, uses invented swears and Chinese curses. We all know what "bad words" are. Unlike most other language rules, we learn about swearwords and how to use them without any real study or classroom instruction. Even very young children know which words are naughty, although they don't always know exactly what those words mean. But swearwords aren't quite as simple as they seem. In this article, we'll explore what makes words into swearwords, why most Americans use them and how society responds to swearing. Virtually every language in every culture in the world has its own unique swearwords. Most researchers agree that swearing came from early forms of word magic. While spoken swearwords from different languages don't sound alike, they generally fall into one of two categories. So why do so many people swear? 100 Most beautiful words in the English language*