Facebook loses $500m Oculus virtual reality case as profits double. Computer Evidence - Computer Misuse Act 1990 cases. Cadbury's attempt to trademark Dairy Milk purple blocked. In the big data age, every company holding confidential customer data should have a duty of care. By David Emm, Senior Security Researcher, Global Research and Analysis, Kaspersky Lab Never underestimate the value of your organisations data to a hacker; implement regular audits of your data and systemsConduct risk assessments to identify potential security gaps and put effective policies in place to minimise these threatsCreate a “defence in-depth” strategy; security is no longer just about protecting the virtual perimeter of your business Big data has been a big buzzword for the last five years as banks, marketers and insurers have harnessed the opportunity to use data to provide a relevant and accurate customer experience. 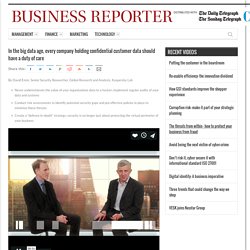 However analysing data to inform decision making is not new in the business world as traditional mainframe technology provided big businesses with the ability to crunch large amounts of data. As big data has taken flight it has demonstrated some of the risks indicating that cyber-resilience is extremely important. 1. What is the Equality Act? A new Equality Act came into force on 1 October 2010. 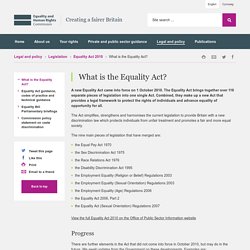 Designing for Inclusion. Inclusive design, design for all, digital inclusion, universal usability, and similar efforts address a broad range of issues in making technology available to and usable by all people whatever their abilities, age, economic situation, education, geographic location, language, etc. 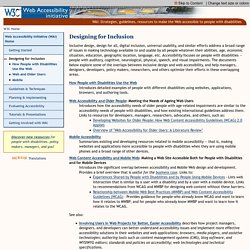 Accessibility focuses on people with disabilities — people with auditory, cognitive, neurological, physical, speech, and visual impairments. The documents below explore some of the overlaps between inclusive design and web accessibility, and help managers, designers, developers, policy makers, researchers, and others optimize their efforts in these overlapping areas. How People with Disabilities Use the Web Introduces detailed examples of people with different disabilities using websites, applications, browsers, and authoring tools. Website accessibility and the Equality Act 2010. Discrimination against people with disabilities is prohibited by law, but website owners often don't realise how the law affects websites. 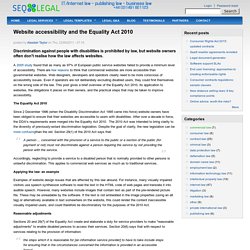 A 2005 study found that as many as 97% of European public service websites failed to provide a minimum level of accessibility. The Equality Act 2010 and Disability Guide for Managers and Staff. Consumer contracts – distance sales. This guidance is for England, Scotland & Wales The Consumer Contracts (Information, Cancellation and Additional Charges) Regulations 2013 replace the previous Consumer Protection (Distance Selling) Regulations 2000 - often referred to as the Distance Selling Regulations - and the Cancellation of Contracts made in a Consumer's Home or Place of Work etc Regulations 2008 for all contracts made since 13 June 2014. 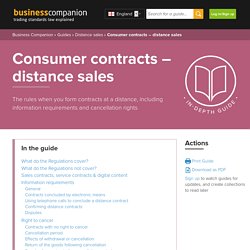 Although there are many similarities, there are also important differences in the new Regulations, which apply both to contracts made on and away from business premises, and introduce new rules for businesses providing digital content. These Regulations affect most businesses that contract with consumers, irrespective of where and how the contract is entered into. The Regulations do not apply to contracts where traders buy goods or services from consumers, nor do they apply to contracts between consumers. Consumer Contracts Regulations. The Consumer Contracts (Information, Cancellation and Additional Charges) Regulations 2013, as they are referred to in full, require traders to give you certain information. 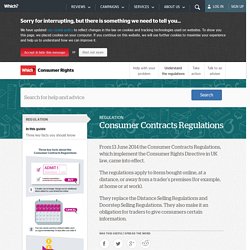 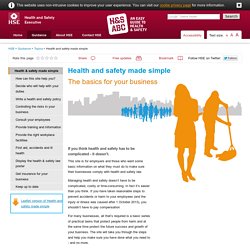 This site is for employers and those who want some basic information on what they must do to make sure their businesses comply with health and safety law. Managing health and safety doesn’t have to be complicated, costly or time-consuming. In fact it’s easier than you think. If you have taken reasonable steps to prevent accidents or harm to your employees (and the injury or illness was caused after 1 October 2013), you shouldn’t have to pay compensation For many businesses, all that’s required is a basic series of practical tasks that protect people from harm and at the same time protect the future success and growth of your business.

We’ve introduced the H&S ABC logo onto guidance and tools to show small and medium-sized businesses just how straightforward health and safety can be. In general, health and safety laws apply to all businesses. Indg36. Private messages at work can be read by employers, says court. Image copyright Thinkstock Employers can read workers' private messages sent via chat software and webmail accounts during working hours, judges have ruled. 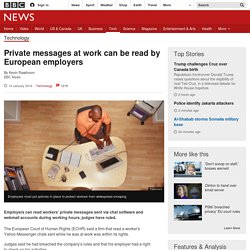 The European Court of Human Rights (ECHR) said a firm that read a worker's Yahoo Messenger chats sent while he was at work was within its rights. China's wall of silence over missing Hong Kong booksellers. Mr Zhang, whose residency is in the former British colony, is thought to have been held as part of a vicious backlash from Beijing aimed at the firm’s trade in thinly-sourced books which are critical of Chinese leaders. 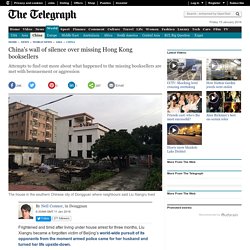 Chinese police also swooped on two of Mr Zhang’s associates at Mighty Current while they were staying in the mainland last October; general manager Liu Por and the company’s founder Lin Rongli, who were both seized in Shenzhen. At around the same time, Guo Minhai, who owns the controlling stake in the firm, also vanished. There is no shortcut to protect children from violent video games. At last! 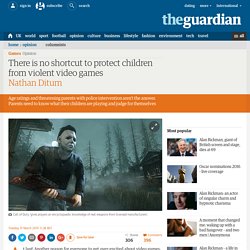 Another reason for everyone to get over-excited about video games. Thanks, headteachers’ group from Cheshire that sent a brick-subtle letter to parents threatening the involvement of the police and social services if their children are allowed access to violent video games. This is terrific work. Actually the letter isn’t entirely misguided, especially if you consider that nearly all of the schools that make up the Nantwich Education Partnership are primary schools, a truly vulnerable age group, and that the letter also deals with social media.

But the problem remains that the letter talks about the dangers of games and the internet as though it’s describing some faraway land of digital monsters and sexual predators. New rules to better protect children from inappropriate video game content. From today, it is a criminal offence to sell video games with a “12” rating to those younger than that age, in the latest move by government to ensure children are protected from unsuitable material. The new rules are part of a transformation in the way in which video games are regulated. A new system simplifying the ratings system comes into effect today after Parliament passed the Video Recordings (Labelling) Regulations 2012. Video games will now be classified by a single authority and anyone convicted of selling restricted games to under-age children could face hefty fines or a prison sentence. Culture Minister Ed Vaizey said: The Video Standards Council.

Investigatory Powers Bill: what's in it, and what does it mean? How 'Frozen' fandom changed Disney's stance on copyright infringement. Star Wars Total Franchise Revenue. How Target Figured Out A Teen Girl Was Pregnant Before Her Father Did. Lucas loses Star Wars copyright case at Supreme Court. A prop designer who made the original Stormtrooper helmets for Star Wars has won his copyright battle with director George Lucas over his right to sell replicas. Intellectual Property Office. Home.