Are care homes a good investment to put into your pension? Care home search site aims to help older people find a bed “in minutes” - Design Week. A new search website has been designed which aims to free up hospital beds and make better, “more efficient” use of care homes. 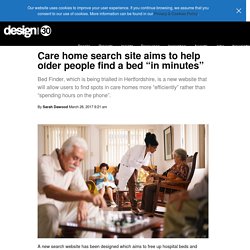 Bed Finder is a centralised property search site being trialled in Hertfordshire, which allows people in need of a bed and their carers to search for care homes in their area. “Simple” to navigate The search site has been designed by health and social care digital consultancy OLM Systems, and is currently being used by the Hertfordshire Care Providers Association (HCPA). Families turn to 'granny nannies' to fill care gap. One in four care homes rated 'bad' or 'poor' by residents and their families. Care home launches pureed fine dining experience for older people living with dysphagia. A care home in West Byfleet is launching a truly innovative fine dining experience for those with swallowing difficulties, providing only high quality and visually appealing food. 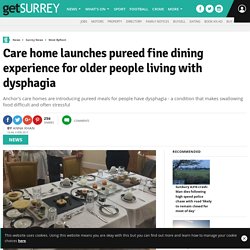 The food is all pureed and the experience is set to help older people and visitors who live with dysphagia - a condition that makes swallowing food difficult and often stressful. The fine dining experience is set to launch in February at the Anchor West Hall care home in Parvis Road. The aim of the launch is to demonstrate that appetising and visually pleasing modified food can be made in all of Anchor's care homes across the country. Using traditional piping or quenelle, the charity presents textured meals in way to reflect the shape of the original produce. Anchor’s Service Delivery Consultant Andy Seal, who is leading the fine dining experience said: "Mealtimes are central to all of our lives, giving us the opportunity for social interaction over good food. Are robots the key to solving social care crisis - LocalGov.co.uk - Your authority on UK local government.

Laura Sharman 31 January 2017 Middlesex University and the University of Bedfordshire will collaborate on a €2.5m international three-year research project to help develop the world’s first robots able to respond to the needs and preferences of elderly clients. 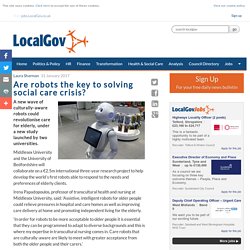 Irena Papadopoulos, professor of transcultural health and nursing at Middlesex University, said: ‘Assistive, intelligent robots for older people could relieve pressures in hospital and care homes as well as improving care delivery at home and promoting independent living for the elderly. Cheshire care home finds dementia dolls give residents 'comfort and a sense of calm' 26-Jan-17 Article By: Sue Learner, Editor A care home in Cheshire has revealed it is using doll therapy on its residents with dementia, an intervention which is still viewed by some as controversial despite it having visible benefits. 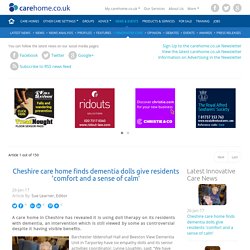 Barchester Iddenshall Hall and Beeston View Dementia Unit in Tarporley have six empathy dolls and its senior activities coordinator, Lynne Loughlin, said: “We have found they work really well. Care home residents should be helped to brush their teeth twice a day, says NICE - Dentistry.co.uk. A draft quality standard to improve oral health in care homes and hospitals has been published today (6 January 2017) by the National Institute for Health and Care Excellence (NICE). 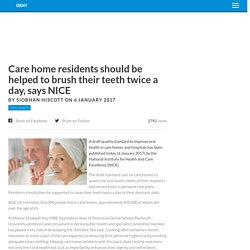 The draft standard calls on care homes to assess the oral health needs of their residents and record these in personal care plans. Residents should then be supported to clean their teeth twice a day or their dentures daily. AGE UK estimates 426,000 people live in care homes, approximately 405,000 of whom are over the age of 65. Professor Elizabeth Kay MBE, foundation dean of Peninsula Dental School, Plymouth University, professor and consultant in dental public health and specialist committee member, has played a key role in developing the standard.

Ageing UK faces £13bn black hole in social care bill by 2030: So why can't we use ballooning foreign aid budget to pay for it? The cost of caring for a rapidly ageing population will tip Britain's social care service into an unsustainable crisis by 2030, a report warns today. 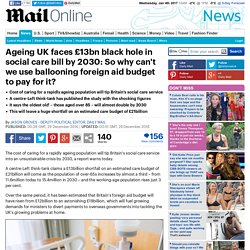 A centre-Left think-tank claims a £13billion shortfall on an estimated care budget of £21billion will come as the population of over-65s increases by almost a third – from 11.6million today to 15.4million in 2030 – and the working-age population rises just 3 per cent. Over the same period, it has been estimated that Britain's foreign aid budget will have risen from £12billion to an astonishing £19billion, which will fuel growing demands for ministers to divert payments to overseas governments into tackling the UK's growing problems at home. What can you do to keep older people safe from fire? - Jackson Fire & Security. How to improve the fire evacuation procedure in a care home. As reported by IFSEC Global, the CQC found that staff had not received fire safety training and were unaware of how to evacuate residents with limited mobility who were living on the building’s higher floors. 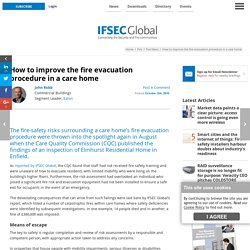 Furthermore, the risk assessment had overlooked an individual who posed a significant fire risk and evacuation equipment had not been installed to ensure a safe exit for occupants in the event of an emergency. The devastating consequences that can arise from such failings were laid bare by IFSEC Global’s report, which listed a number of catastrophic fires within care homes where safety deficiencies were identified by subsequent investigations. In one example, 14 people died and in another, a fine of £380,000 was imposed. Why Nursing Homes Should Have Gardens. On July 8, Massachusetts passed into law a bill that protects transgender people from discrimination in public places, including sports arenas, gas stations, movie theaters, and malls. 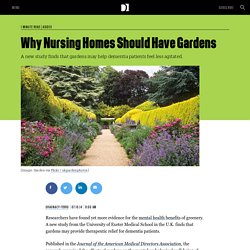 For LGBT advocates, #TransBillMA was a victorious end to a fight that had lasted since 2007, when the first of several similar bills failed to pass. Maxwell Ng, an architect at DiMella Shaffer and the steering committee chair for Massachusetts Transgender Political Coalition, says he and the MTPC have been waiting even longer—since 1997, which marked the passage of a bill that protects transgender people against discrimination in housing, employment, and receiving credit from banks. Yet that older law stopped just short of extending to public spaces. The main reason for the holdup? The public restroom—the same issue that has incited a civil liberties battle nationwide.

Experts reveal how rabbits and even snakes could help ease depression. Any dog lover will tell you their Bichon Frise or St Bernard makes them smile. 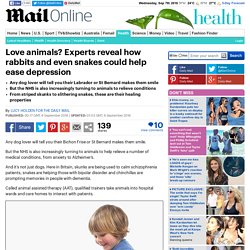 But the NHS is also increasingly turning to animals to help relieve a number of medical conditions, from anxiety to Alzheimer’s. And it’s not just dogs. Here in Britain, skunks are being used to calm schizophrenia patients, snakes are helping those with bipolar disorder and chinchillas are prompting memories in people with dementia. Alzheimers. Care home residents need tailored nutrition – here are some guidelines. Malnutrition is thought to affect 10% of people over 65 (pdf) in the UK. 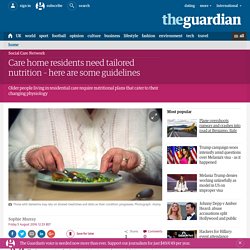 Special attention needs to be paid to residents living with chronic conditions like dementia, as they may require an altered provision of food as their condition progresses – for example, snack stations instead of the typical three main meals a day, finger foods to make eating easier. Use only high-quality, nutritious ingredients Keep pushing the boundaries of food innovation. 6407-BARCLAY6407-BARCLAYHigh numbers of social care complaints upheld by ombudsman. Photo: John Birdsall/REX/Shutterstock Most complaints to the Local Government Ombudsman about councils’ child protection and adult care planning functions were upheld during 2015-16, the watchdog’s annual review has revealed. Sixty-eight per cent of complaints related to child protection that were investigated in detail by the ombudsman were upheld, as were 70% of those dealing with adult care planning.

The ombudsman provides an independent review of local authority decision-making where the person concerned has exhausted internal complaints processes. Among all complaints about council-run adult social care services that were investigated, 58% were upheld, as were 53% of those concerning education and children’s services, above the average across all services of 51%. RPS launches ultimate guide for pharmacists working in care homes. FS78 Safeguarding older people from abuse fcs. 6407-BARCLAY6407-BARCLAYHow can practitioners protect adults when third parties are in the way? Picture posed by model (Photo: Gary Brigden) By Stephen Martineau As the Care Bill was making its way through Parliament, much was written in Community Care about the debate over whether social workers should have a court-sanctioned power of entry in England when their safeguarding enquiries seem to be being hindered by a third party.

Those in favour of this power argued that it was necessary in order to fulfil the new statutory duty, under section 42 of the Care Act 2014, to make enquiries when a safeguarding concern has arisen. Others argued that present legal powers were sufficient, that the use of a power of entry might actually increase the risk of further harm, and that its availability might have a negative effect on the ethos of social work practice. CQC to add financial side to ‘well led’ question in 2017 – before sixth rating. The CQC will “almost certainly” introduce a sixth key question on efficiency of resources into its ratings, as per Lord Carter’s recommendations, but this will only happen when they have “something that commands confidence throughout the service, as we have done with our quality ratings”, Sir Mike Richards, chief inspector of hospitals, said. In the meantime, the regulator will enhance its fifth key question of whether a service is well-led by introducing an element of finance to it as well as of quality.

This is being developed this year with a view to rolling it out from 2017, he said during one of the sessions at this week’s Health+Care Show. The idea of a sixth item in CQC’s traditional five-question ratings system was first floated in Lord Carter’s efficiency review, published earlier this year. He suggested the sixth domain should revolve around money and resources, both including financial accounts and reflecting areas such as procurement, estates and use of agency staff.