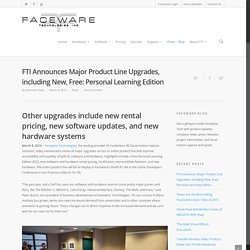 Highlights include a free Personal Learning Edition (PLE), new software and hardware rental pricing, localization, new workflow features, and new hardware. The entire product line will be on display in Faceware’s booth #1244 at the Game Developers Conference in San Francisco (March 16-18). “The past year and a half has seen our software and hardware used on some pretty major games and films, like The Witcher 3, NBA2K16, Call of Duty: Advanced Warfare, Destiny, The Walk, and more,” said Peter Busch, vice president of business development at Faceware Technologies. Jake Kaufman. Digital sculpting in the collectibles industry. Sideshow Collectibles create some of the most highly sought after limited edition statues and busts, articulated figures, film prop replicas and fine art pieces in the world. 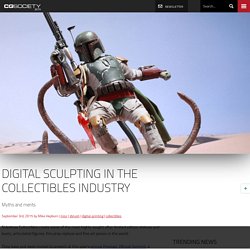 They have just been invited to present at this year’s annual Pixologic ZBrush Summit, a prestigious event dedicated to the leading industry standard in digital sculpting tools. There, their team has been asked to demonstrate how they use state-of-the-art technology to design statues and busts, sculpting techniques for 3D printing, and engineering for production. Over the past decade, Sideshow’s in-house sculpt division has transitioned from primarily traditional sculpture to embrace digital tools and technology.

Justino. Danger Mode. MIT's bioLogic: Bacteria-powered 3D printed biofabric opens and contracts as you sweat. Nov 5, 2015 | By Kira If the idea of embedding active, ancient bacteria into your clothing to help control your sweat seems backwards, if not repulsive, think again. 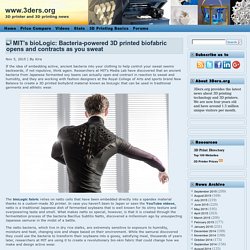 I5 Plus Smart Bluetooth 4.0 Watch-24.99 and Free Shipping. I5 Plus Smart WristbandNote: The color of the word on the screen is random. 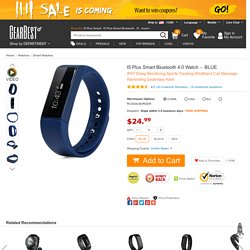 Multifunctional smart wristband Easy operation, extraordinary experience! You just need to turn over your wrist or touch the screen to switch the interface;Personalized display function0.91 inch OLED touch screen can show 32 characters in large font. INFOGRAPHIC: Best Selling 3D Models and Practices - Blog - CGTrader.com. You've designed dozens of models, but here comes a day when you get confused about what to model next? 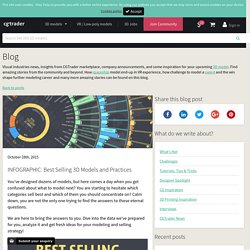 You are starting to hesitate which categories sell best and which of them you should concentrate on? Calm down, you are not the only one trying to find the answers to those eternal questions. We are here to bring the answers to you. Dive into the data we've prepared for you, analyze it and get fresh ideas for your modeling and selling strategy! Demand vs Supply For your better understanding what models are sold well, we prepared an analysis of competition in the categories. Reviewing the sales volume and revenue chart, it is obvious that car 3D models have the largest revenue volume and contains 22% of all revenue.

Going further to the product price and transaction price chart, we can see that most categories are overpriced, especially character 3D models, while science / medical 3D designs are underpriced. Product volume indicates the competition in the categories. Nightmare Effects: Evolution of a Horrifying Character Mask. Photo by Jason Ragosta As a child, I had an overactive imagination. 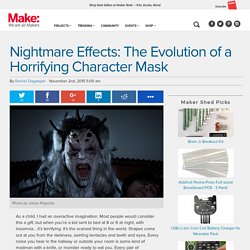 Most people would consider this a gift, but when you’re a kid sent to bed at 8 or 9 at night, with insomnia… it’s terrifying. Download Clarabella Crocodile Toothbrush Holder - Support Free by Evavooo - Clarabella Crocodile Toothbrush Holder - Support Free +Upload Prints Zoom Item Details Comments Printing Details A two part toothbrush holder and toy.Inspired by the popular children’s story book 'Smile , Crocodile, Smile' (also known as Clarabella's Teeth), by award winning animator An Vrombaut, creator of the 64 Zoo Lane television and book series.Read more about it here -From Book To Print - Clarabella CrocodileSortytelling and 3D Printed Toy Art Session at the iMakr store A perfect accompaniment to bed-time reading with the book (paperback available here), and also a fun educational toy to practise brushing teeth with! 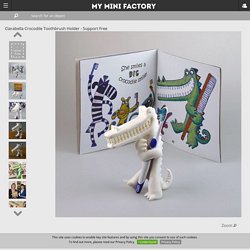 Keep in the bathroom or toybox.Can also be read as an e-book for tablet with MeBooks. Thanks to Cemal (check out his deisgns here) for fitting his klick joint! Desk exercises: 11 tips and routines for designers. As designers and artists, we often spend long hours sat at a desk and staring intently at a monitor screen. You know about taking regular screen breaks, right? But workplace wellness involves more than having a rest. Learn Squared. Bridgman's Complete Guide to Drawing from Life: George Bridgman: 8601200483963: Amazon.com: Books. 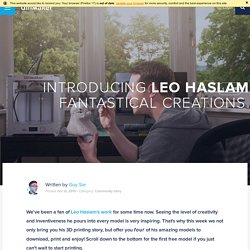 Seeing the level of creativity and inventiveness he pours into every model is very inspiring. That's why this week we not only bring you his 3D printing story, but offer you four of his amazing models to download, print and enjoy! Affecting the past and future with Sculpteo's 3D printing technology. Fabric Engine 2 is here! - Fabric. Two years ago we started discussing the next phase of Fabric Engine. 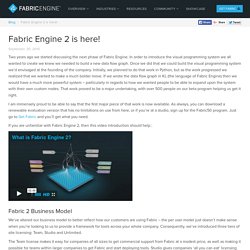 In order to introduce the visual programming system we all wanted to create we knew we needed to build a new data flow graph. Once we did that we could build the visual programming system we’d envisaged at the founding of the company. Initially, we planned to do that work in Python, but as the work progressed we realized that we wanted to make a much bolder move. FlippedNormals.

Roll20: Online virtual tabletop for pen and paper RPGs and board games. English to Draconic translator. SXSW PanelPicker. Voting period for this idea type has passed There are seven deadly mistakes made consistently by both expert and novice infographic designers. 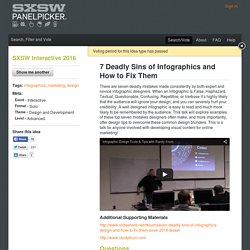 When an infographic is False, Haphazard, Textual, Questionable, Confusing, Repetitive, or Verbose it’s highly likely that the audience will ignore your design, and you can severely hurt your credibility. A well designed infographic is easy to read and much more likely to be remembered by the audience. This talk will explore examples of these top seven mistakes designers often make, and more importantly, offer design tips to overcome these common design blunders. This is a talk for anyone involved with developing visual content for online marketing! Additional Supporting Materials Questions. Keysforge web app lets you 3D print ‘do not duplicate’ keys based on a picture. Aug 5, 2015 | By Alec While 3D printing technology is overwhelmingly used for innocent and harmless fun, we sometimes hear voices emphasizing its negative side as well – that 3D printers are tools for criminals who can 3D print guns and even keys to break into your home.

While this has always been a negligibly small portion of what 3D printing is all about, that latter option has just become a whole lot easier. For this week, a group of researchers from the University of Michigan has launched a free web-based platform that can easily turn photos of keys into 3D printable CAD models. BleepBleeps turns to 3D printing to bring the cutest parenting gadgets to market quickly. Aug 6, 2015 | By Simon Although there are more 3D modeling programs in existence today than one could seemingly count on all of their fingers, it goes without saying that some of those programs are just simply more versatile and better than the others when it comes to performing specific tasks.

While mechanical engineers and even industrial designers might turn to a program like SolidWorks to create manufacturing-ready parts that are carefully executed using the program’s accurate modeling tools, some designers and makers may find more success using a program such as MODO, which is considered to be more like ‘digital clay’ that can then be visualized and even animated immediately within the program while the design is in development. Of course, a combination of these tools doesn’t hurt for satisfying different workflows, but most people likely aren’t going to be spending tens of thousands of dollars on their software, either.

Posted in 3D Printing Applications Maybe you also like: MeliesArt develops method for visualizing data as 3D printed sculptures. Aug 7, 2015 | By Alec A 3D printed representation of the world's biggest companies. At its heart, 3D printing is about turning digital data into physical, tangible models, but one German artist has been interpreting that in a completely different way than most of us do. Blokko : All things fun. Australia's Eora 3D prepares to launch $199 iPhone-powered 3D laser scanner on Kickstarter. Aug 4, 2015 | By Simon When the first iPhone came out in 2007, the ability to perform a number of tasks that were previously only able to be performed on a desktop computer revolutionized how people worked on-the-go. Today, thanks to more apps than one could seemingly know what to do with, the ability to work on-the-go answering emails, taking photographs or scans and holding conference calls couldn’t be any easier. Now, we’re on the verge of seeing the same kind of revolution happen with the way that we’re able to capture the world in 3D around us.

Among others who are actively developing a 3D scanning solution for mobile devices include Australian start-up Eora 3D. Founded in Australia by three young Australian entrepreneurs, Eora 3D was founded after the young entrepreneurs were faced with a $20,000 bill for a 3D scanner and devised a plan for building their own iPhone-powered 3D scanner that could be built and sold to others like them for significantly less. Posted in 3D Scanning. 3D-Printed Gun Named After An Arrested Gunmaker. Google’s Boston Dynamics Is 3D Printing Streamlined Legs For Their Humanoid Robot, Atlas. The Mill. How Much Does 3D Animation and 3D Illustration Cost? SandStorm Photoshop Action. Watch the above video for a demonstration of the action and detailed video tutorial Add pro lighting effects to your Sandstorm images with Soft Focus 2. A Vegetable Growing Guide Infographic Cheat Sheet.

We are right in the middle of vegetable-planting season, the sun is shining, and we’ve wanted to grow our own veg for a while now, but the thought of knowing where to plant them, how far apart the different vegetables should be, and how long they need to grow can become daunting if you plan on doing more that one at a time. Infographic and embed code below. Action: The Animator's Process. Surreal Photographs Mix Wes Anderson And Salvador Dali. Photographer Todd Baxter doesn't try to capture real life in his photos. He's a narrative artist whose medium happens to be photography. Showreel — Lunar Animation. Avengers S.H.I.E.L.D OS Ver 1.2.0 for Rainmeter - Rainmeter Skins Gallery. Rainmeter skins and themes Download. RMSkin file download. Most skins are now available in a choice of three colours; Orange, Red and Blue.

Simply click with the middle mouse button on the skin to cycle through the colours. Zefrank.com. Wave Racer. Sun Electronics - Lowest Prices in Solar Panels, Kits, Inverters. The Small Product Lab Creators. Pro tips to help you find your inner artist. From the beginning of my career as a young artist, the worlds of JRR Tolkien have inspired me to create art.

Stress Level Zero. Filament wizard Kai Parthy unveils his new MOLDLAY wax 3D printing filament. How Can I Make Sure My Resume Gets Past Resume Robots and into a Human's Hand? A closer look at the Mini F1 Drivers 3D printed toy business on Shapeways. Make Progress on Your Money - Alexa.