Joshua Foer: Feats of memory anyone can do 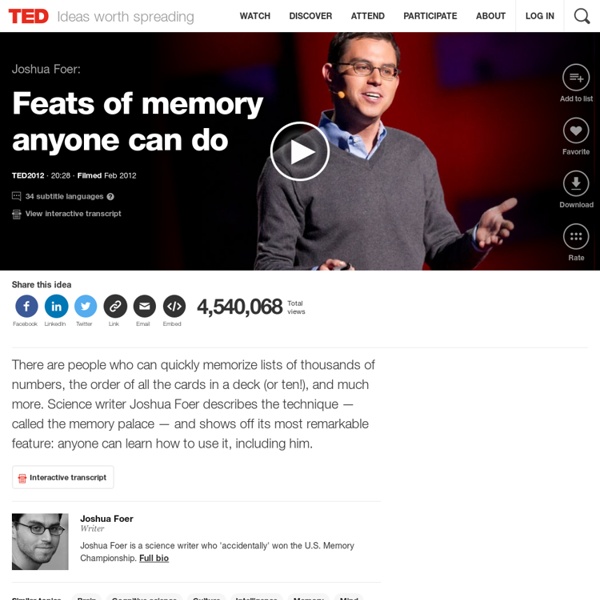 How to turn small talk into smart conversation Imagine almost any situation where two or more people are gathered—a wedding reception, a job interview, two off-duty cops hanging out in a Jacuzzi. What do these situations have in common? Almost all of them involve people trying to talk with each other. But in these very moments where a conversation would enhance an encounter, we often fall short. We can’t think of a thing to say. What teens really want to know about sex On the first day of my Sexuality and Society class, I don’t pass around anatomy drawings. I don’t hand out pamphlets about safer sex, although those are stacked on a table near the door. Instead, the first thing I do is establish ground rules. People should speak for themselves, laughter is OK, we won’t ask “personal history” questions, and we’ll work to create a community of peers who care about and respect one another.

Make the most of your 20s: Meg Jay at TED2013 In her 20s, Meg Jay saw her first psychotherapy client, Alex, who was there to talk about her guy problems. Jay didn’t take the sessions all too seriously at first. But then her supervisor gave her a wakeup call. 20 Best Inspirational Speeches from the Movies When inspiration does not come, I go for a walk, go to the movies, talk to a friend, let go… The muse is bound to return again, especially if I turn my back! ~Judy Collins People watch movies for a lot of different reasons. Schizophrenia Revealed To Be 8 Genetically Distinct Disorders Just over 1 percent of the American population has been diagnosed with schizophrenia, a severe mental disorder that causes debilitating symptoms including paranoid delusions, auditory hallucinations, and impaired social behavior. A new study has revealed that schizophrenia is not one disease, but eight disorders with genetically distinct causes. This could dramatically change how schizophrenia is diagnosed and treated.

Population pyramids: Powerful predictors of the future - Kim Preshoff If your selected country was not represented by a population pyramid in the lesson, you may wonder what it looks like. The U.S. Census Bureau has an International Data Base that can help you create one. Is your country a fast, slow or no growth pyramid?The current world population can be seen ticking on the World Population Clock. Factors such as better water, food, medicine, industry, and health care have caused the world population to grow exponentially. Our Use Of Little Words Can, Uh, Reveal Hidden Interests Katherine Streeter for NPR One Friday night, 30 men and 30 women gathered at a hotel restaurant in Washington, D.C. Their goal was love, or maybe sex, or maybe some combination of the two.

7 talks on how we make choices Now playing Over the years, research has shown a counterintuitive fact about human nature: That sometimes, having too much choice makes us less happy. This may even be true when it comes to medical treatment. Baba Shiv shares a fascinating study that measures why choice opens the door to doubt, and suggests that ceding control — especially on life-or-death decisions — may be the best thing for us. (Filmed at TEDxStanford.)

The Good Listener: What's The Perfect Soundtrack To Teenage Flirtation? : All Songs Considered We get a lot of mail at NPR Music, and amid the Bachelor Bouquets we ordered ourselves in order to appear loved is a slew of smart questions about how music fits into our lives — and, this week, thoughts on music to play at a dance for nervous, flirtatious teenagers. Nanna writes via Facebook: "This Valentine's Day, I will attend a formal thrown for freshman and sophomore college students in the Netherlands — they are giving us, the lecturers, free drinks, so how could I not? — and I'm already massively looking forward to observing awkward late-teens eyeing each other and trying to flirt. What would be the best soundtrack to this particular event?" These teenagers in the 1998 film Can't Hardly Wait needed their own nostalgia â which is why today's teenagers might not connect with Can't Hardly Wait the way an earlier generation did.

The best stats you've ever seen - Hans Rosling Rosling is a passionate advocate for “liberating” publicly-funded data on the Internet. Select one topic area for which country-specific data might be compared (e.g., education, health, food production, the environment, etc.), and identify what you think are the best sources of data in this area on the Internet. Create a guide that lists these sources, and provides a brief review of each. If the administrators of these data repositories are thinking about how users might engage with the data via mobile devices or social media, note this in the review.