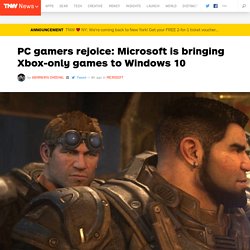 Head of Xbox Phil Spencer made the announcement at the E3 gaming conference today. Speaking about fighting game Killer Instinct, Spencer said, “We’re going to allow people to play on PC, to play on console, to play back and forth.” Hopefully that means cross-platform play. Guitar Hero Returns With First-Person Rocking. Guitar Hero is poised to make plastic guitar controllers a fixture of living rooms everywhere once again, with a brand new version called Guitar Hero Live that ships this fall, complete with a built-in library of streaming, official music videos and first-person concert experiences that feature crowds that actually react to your axe prowess. 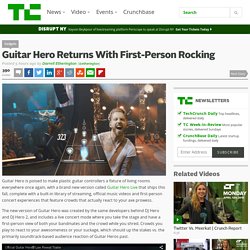 The new version of Guitar Hero was created by the same developers behind DJ Hero and DJ Hero 2, and includes a live concert mode where you take the stage and have a first-person view of both your bandmates and the crowd while you shred. Fast & Furious: Legacy brings all seven films to one mobile game. Gaming execs:Join 180 select leaders from King, Glu, Rovio, Unity, Facebook, and more to plan your path to global domination in 2015. 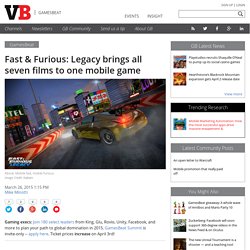 GamesBeat Summit is invite-only -- apply here. Ticket prices increase on April 3rd! Fast, furious, and free-to-play. Mobile publisher and developer Kabam has released Fast & Furious: Legacy, available now on iOS and Android. Page not found. Facebook: Games for Oculus Rift will arrive in 2015. Nintendo Is On A Collision Course With Apple. Brendan Lyall is the CEO of Grow Mobile The news that Nintendo and DeNA have partnered to produce mobile games together has led to a glut of articles, think pieces and speculative lists about what the future holds. 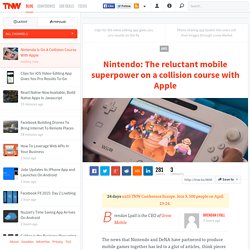 The thought of Mario Kart on an iPad has been enough to lead to a worldwide rush of excitement, evidenced in the corporate landscape by the 27 percent jump in Nintendo’s share price following the news. While the news has been presented as a total volte face from Nintendo, the truth is a little different. The inherent caution the company has towards mobile gaming remains even after the announcement, and it is possible that it will hobble their ability to become a genuine mobile gaming giant.

The battle to control the soul of mobile games. Dear Teacher, A Video Game Developer Is A Real Job And Should Be Celebrated. Today was career day at my son’s school. 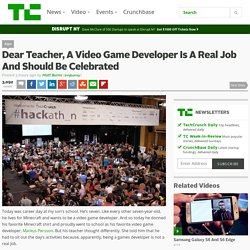 He’s seven. Like every other seven-year-old, he lives for Minecraft and wants to be a video game developer. And so today he donned his favorite Minecraft shirt and proudly went to school as his favorite video game developer, Markus Persson. But his teacher thought differently. Dr. Panda passes 40 million installs, showing that kids in China and the West play the same way. Gaming execs:Join 180 select leaders from King, Glu, Rovio, Unity, Facebook, and more to plan your path to global domination in 2015. 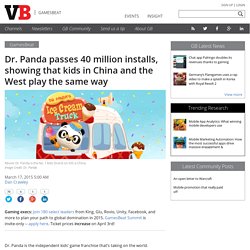 GamesBeat Summit is invite-only -- apply here. Ticket prices increase on April 3rd! Dr. This Game Turns Google Autocomplete Into A Game Of Family Feud. Damn, this is more fun than I would’ve expected. 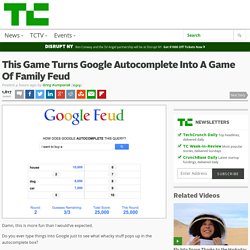 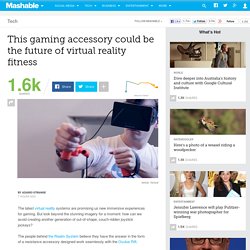 But look beyond the stunning imagery for a moment: how can we avoid creating another generation of out-of-shape, couch-ridden joystick jockeys? The people behind the Realm System believe they have the answer in the form of a resistance accessory designed work seamlessly with the Oculus Rift. Attached to the user's waist and hands, the Realm system works with the Kinect camera to track your movements, and the Oculus Rift to let you see the corresponding actions in VR. The key aspect of the Realm is that it actually forces you to exert energy when you're swinging an axe to defeat virtual ogres, or makes you feel the tension of a resistant steering wheel while driving a VR racing car. Ambitious Crowfall online role-playing game already passes Kickstarter goal. 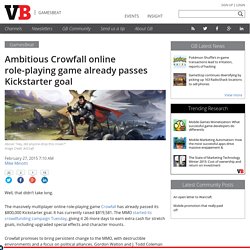 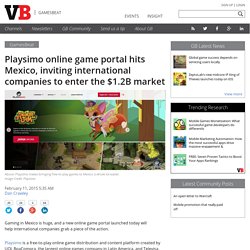 Playsimo is a free-to-play online game distribution and content platform created by UOL BoaCompra, the largest online games company in Latin America, and Televisa, the largest media company in the Spanish-speaking world. Today’s launch brings free-to-play games like Legend Online, Animal Jam, and Battlefield Heroes to a Mexican audience on a single site, with localized content and local payment methods for in-game purchases. Mexico’s video game industry is worth more than $1.2 billion — more than its movie and music industries combined. Playsimo online game portal hits Mexico, inviting international companies to enter the $1.2B market. Global game success depends on servicing users locally. This sponsored post is produced by FunPlus. Inspired by Dean Takahashi’s August 2014 post entitled, “It’s an interconnected gaming world”, I recently wrote a piece examining the impact on the game industry of some of the globalizing technology forces Thomas Friedman described in “The World is Flat.”

I described how these technological “flatteners” eliminated the friction in a global game distribution environment oriented around the movement of physical products, allowing game developers from anywhere to reach game players everywhere in the world with nominal cost. I predicted that this globally flat environment — almost fully realized in today’s smartphone ecosystem — would result in an eventual erosion of regional tastes in games and a unification of the global top-grossing charts. In this world, the winners will come from all over the world and they’ll be bigger than ever. Atari Is Building A Brand New Asteroids Game For PC. Everyone’s favorite 1979 space shooter is getting a facelift! Atari announced today that it’s revived the classic, to be released as a new game for PC called Asteroids: Outpost. Atari says the game will be an open world, sandbox style survival experience where players can mine for resources as well as build and defend their base.

The game will be set on an “unforgiving asteroid” where players can build “highly customized bases” and battle for their survival. Asteroids: Outpost is a multiplayer game, so players will need to defend their bases against other real players and recurring showers of small asteroids which are also mineable. Atari says the game will be a homage to the original game by including features like “asteroid blasting capabilities.” TheScore Launches an Android app for eSports News. If you eat, sleep and breathe electronic sports, you’ll love sports media company TheScore’s latest app. Creatively dubbed ‘eSports‘, the free Android app brings breaking news, live scores, stats, and video streams from around the world of competitive video gaming to your mobile device. eSports currently covers a handful of popular games including Dota 2, League of Legends, Counter-Strike: Global Offensive, Call of Duty, StarCraft II and Hearthstone.

The company says that it will add more games and regions to its list in the near future. An iOS app is also in the works and should be out soon. TheScore Launches an Android app for eSports News. The BBC's Doctor Who Coding Game Comes to Tablets Today. The BBC has updated its online game The Doctor and the Dalek with four new levels, and is launching free iPad and Android tablet versions of the Doctor Who-themed title.

Developed as part of the BBC’s Make It Digital Initiative last October, the idea behind the game is to introduce players to the world of programming. The Doctor and the Dalek is based on a stand-alone story from franchise writer Phil Ford, and follows the newly regenerated Twelfth Doctor in a dangerous new quest. The Oculus Rift Crescent Bay Prototype Truly Transports You. Oculus is at CES 2015, giving a larger set of people a chance to experience virtual reality with its latest prototype, the Crescent Bay version of the Oculus Rift. The Crescent Bay edition of the VR hardware originally broke cover back in September of 2014, but only a small handful of folks have tested it out thus far.

Virtual Reality Could Be The Toughest Fight Of Mark Zuckerberg's Life - BuzzFeed News. TC GameCast Episode 3: Open Worlds And Picking A Gaming PC. GamerGate Harassment Of Zoe Quinn Stoops To New Low. Minecraft Is Getting A Standalone “Story Mode” In 2015. Telltale Games has announced on its blog that it’s working with Minecraft developer Mojang to create a series of games set in the world of the blocky hit franchise. The game will presumably bring Telltale’s signature style to the Minecraft universes. In its popular licensed titles (the studio has made games in the Walking Dead, Back to the Future, and Game of Thrones universes, to name a few), the studio typically puts players in the shoes of their favorite protagonists or new characters with interesting perspectives on key events in a series.

Google's Niantic Labs embarks on a giant interactive transmedia project with controversial author James Frey. Plex Arrives On PS4 And PS3 In Europe And Asia, U.S. Launch Coming Later. Here’s What Happens When Thousands Of Gamers Pack A Sports Arena To Watch Esports. At an event in San Jose this weekend, TechCrunch went full esports. The confab, the Intel Extreme Master digital tournament, saw professional players from around the world duke it out in League of Legends and Starcraft 2, two of the most popular video games around. Google Updates Its Cardboard VR App, Launches SDKs For Android And Unity. Minecraft Lands on Windows Phone for the First Time. Just a few months ago, Microsoft acquired Mojang, the developer behind the extremely popular Minecraft game. Today, it’s making the game available for Windows Phone users.

Space Ape Games, Maker Of Samurai Siege, Grabs $7M Series C. BBC iPlayer Hits XBox One, Adds 30 Day Downloads. These are the games you can play for free with Xbox Live Gold this month. The guy behind 'Threes' wants to 'fix' real-time strategy games. How to share your gaming with the world on Twitch. Twitch teams up with Teespring to help broadcast partners get into merchandising. Unity 4.6 Finally Brings The Long Promised User Interface Creator. How India's Reliance Games is using movies to become a global mobile game publisher (interview) page 2. Singaporean Mobile Game Developer Inzen Raises $748,000 To Tackle The Chinese Market. King celebrates official launch of Candy Crush Soda Saga with antics in New York and London. Elegant Star Wars Minecraft skins out now for a more civilized Xbox One and Xbox 360.

The Witcher: Battle Arena is the 5-minute mobile MOBA you can play on the john. PC online games will hit $30.7B by 2017. Goat Simulator Satirizes World Of Warcraft With An MMO Expansion. Far Cry 4 fan climbs Mount Everest to play it: 'It all seems so unreal' Sony's North American PlayStation chief on PS4's dominance, 1-year anniversary, and GamerGate (interview) Sweden's successful entrepreneurs launch their own game-startup accelerator. Balancing isn't easy: Team Ninja on character tweaking in Dead or Alive 5: Last Round (part 2) The Lesson Of Monument Valley. The DeanBeat: What are the ingredients for the billion-dollar deals in gaming? Nexon drops developer Robotoki's first game after studio drops free-to-play model.

5 clever co-op games that justify human interaction. European Startups, Get Your Pitches Together. How the Warcraft movie makes one film out of a universe of stories. Buried Atari 2600 'E.T.' games are for sale on eBay. Grand Theft Auto V Gets A Huge Update For Xbox One, PS4, And PC. Oculus CEO Says Consumer Oculus Rift VR Headset Is “Months, Not Years” Away. Microsoft is already planning a dozen more updates for Xbox One in 2015.

King Digital Falls To 50% Of Its IPO Price.