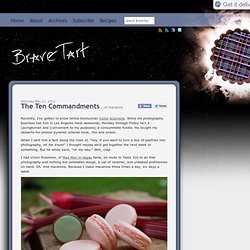 While his photography business has him in Los Angeles most weekends, Monday through Friday he’s a Lexingtonian and (convenient to my purposes) a consummate foodie. He bought my desserts-for-photos pyramid scheme hook, line and sinker. When I sent him a text along the lines of, “hey, if you want to turn a box of pastries into photography, let me know!” I thought maybe we’d get together the next week or something. But he wrote back, “on my way.” I had Victor Sizemore, of Mad Men in Vegas fame, en route to Table 310 to do free photography and nothing but laminated dough, a vat of caramel, and unbaked profiteroles on hand. Salted Caramel Apple Pie. If you’re looking to make new friends, salted caramel is a good place to start. 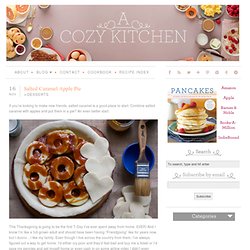 Combine salted caramel with apples and put them in a pie? An even better start. This Thanksgiving is going to be the first T-Day I’ve ever spent away from home. Plum Pudding Brandy Sauce - 1999: Prince Edward Island: Visitors Guide. Mini Plum Puddings recipe. Vegan Rose Water Almond Milk Pudding « TGIF! 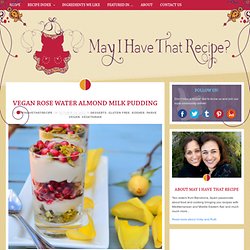 Not that I care so much about weekends, but this one is kind of special for me. I’m one of those people who remember EVERYTHING. Everything, including exact dates and times of events that happened in the past. Lemon Sugar Cookies. 10 Tasty Mug Cakes That You Can Make in Just Minutes. How to make macarons - some tips and tricks. For those of you who read this blog regularly, you will know that macarons are one of my obsessions. 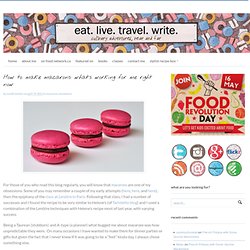 Some of you may remember a couple of my early attempts (here, here, and here), then the epiphany of the class at Lenôtre in Paris. Following that class, I had a number of successes and I found the recipe to be very similar to Helene’s (of Tartelette blog) and I used a combination of the Lenôtre techniques with Helene’s recipe most of last year, with varying success. Macaron Mythbusters. As I wrote in my first macaron post, I make macarons every day at work, learning something new with each batch. 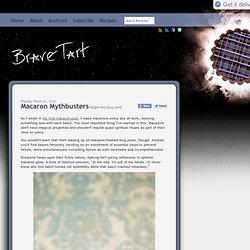 The most important thing I’ve learned is this: Macarons don’t have magical properties and shouldn’t require quasi-spiritual rituals as part of their mise en place. You wouldn’t learn that from reading up on macaron-themed blog posts, though. Instead you’ll find bakers fervently insisting on an assortment of essential steps to prevent failure, while simultaneously conceding failure as both inevitable and incomprehensible. Simple Sundays. Today’s post comes by way of a special request from a reader comment when I published my recipe for No Bake Lemon Curd Cheesecake Bars a few weeks ago. 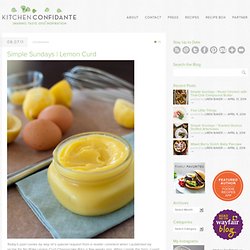 When I made the bars, I used the convenient (yet divine) lemon curd from Trader Joe’s. However, we don’t all have a Trader Joe’s nearby, and the truth is, Lemon Curd is really very simple to make. Thanks to Stef the request! Lemon curd – I could eat it by the spoonful. I must confess, as simple as it is to make, I usually buy it. But, it really is so easy to make; store bought lemon curd isn’t exactly time saving. Simply put, lemon curd is a custard, but take a look at all the recipes in the books and online, and you will see that there can be quite a variation when it comes to the critical ingredient (other than the lemon, of course) and the methodology.

Cherry clafoutis. You know what? 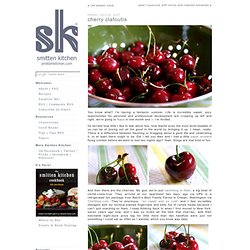 I’m having a fantastic summer. Poppy seed lemondoodles. The internet blows my mind. 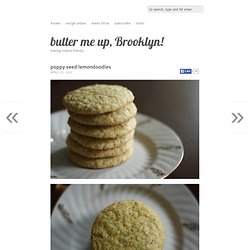 I lay awake at night trying to understand how it works; how it brings us all together, how we will continue to connect, and how it knows that I am searching for the current weather in Hong Kong, even when I myself did not know I even needed that information. How is the internet going to turn out? Are we all going to have claws for hands because of the overuse of touch screens? Are doctors going to rename the pointer finger the iPointer finger? Make the Delicious Carrot Cake They Serve on Rikers Island. How To Make Creamy Ice Cream with Just One Ingredient! Yes, that's right; you heard us. 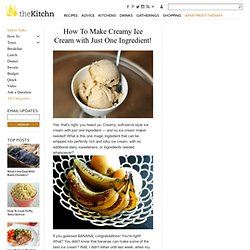 Creamy, soft-serve style ice cream with just one ingredient — and no ice cream maker needed! What is this one magic ingredient that can be whipped into perfectly rich and silky ice cream, with no additional dairy, sweeteners, or ingredients needed whatsoever? Maple Pots de Crème with Almond Praline Recipe at Epicurious. Photo by Dan Forbes yield Makes 4. 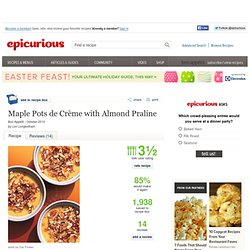 Pâte à Choux Recipe (Cream Puff Pastry) The Best Chocolate Mousse of Your Life Under 5 Minutes : Cafe Fernando – Food Blog - best chocolate mousse - best chocolate mousse recipe - chocolate chantilly - chocolate mousse recipe - herve this - Chocolate. December 22nd, 2010 | Category: Chocolate Two ingredients (seriously, only chocolate and water) and five minutes later, you will be eating The Best Chocolate Mousse of Your Life. I promise. And you don’t even need any fancy kitchen gadgets. MINI MONKEY BREAD. Cinnamon Toast Rolls. The USDA released its new food pyramid the other day (which is actually a plate now instead of a pyramid), and I am sorely disappointed to report that cinnamon rolls did not appear anywhere on that plate.

I think by now most of us know what should be on our dinner plate in terms of healthy, well-rounded nutrient-laden meals, but it is my considered opinion that our breakfast plate should include cinnamon rolls now and then. And not just any cinnamon roll, mind you, but how ‘bout a homemade cinnamon roll hybrid that is a cross between a cinnamon roll and cinnamon toast, is super easy to make and gosh darn delicious. In honor of their ancestry, I call these little gems cinnamon toast rolls, and here’s all you need to make them… Yep. That’s it… some soft white bread, some butter and some cinnamon sugar. Trim the crusts off of the bread. Triple-Chocolate Mousse Cake. Honeyed Pears in Puff Pastry. Poaching fruit is one of my favorite things to do when cold weather arrives. It's so warming to stand over a boiling pot of fragrant spices and lose yourself in thought.