I want to listen: A sense of hope. The past couple weeks exploring a wide range of political views with acquaintances and perfect strangers has been a fascinating and, at times, very powerful journey for me. 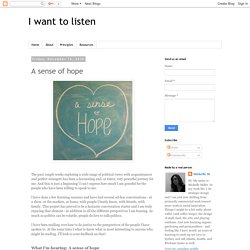 And this is just a beginning! I can't express how much I am grateful for the people who have been willing to speak to me. I have done a few listening sessions and have had several ad-hoc conversations - at a show, at the markets, at home, with people I barely know, with friends, with family. This project has proved to be a fantastic conversation starter and I am truly enjoying that element - in addition to all the different perspectives I am hearing. 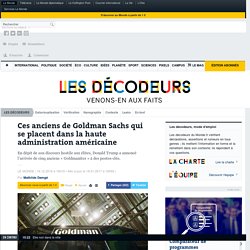 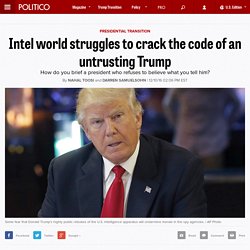 Some fear that Trump's highly public rebukes of the U.S. intelligence apparatus will undermine morale in the spy agencies, politicize their work, and damage their standing in a world filled with adversaries. After all, if the U.S. president doesn't believe his own intelligence officials, why should anyone else? Story Continued Below "There is nothing more sacred to intelligence officers than their professionalism, honesty and non-partisanship.

Intel world struggles to crack the code of an untrusting Trump. How my father, JG Ballard, foresaw our strange present. ‘Reality is now a kind of huge advertising campaign, selling television’s image of what life is about.” 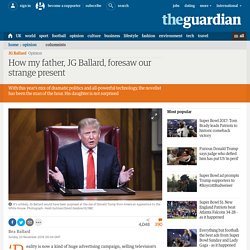 That could be a response to recent events, but JG Ballard said those words in 1988. As readers of my father will know, he was fascinated by the way advances in technology and the mass media revolutionised our lives. When reality television became a massive new trend, my father was unsurprised. He once said to me: “How about a series with celebrities fighting?” (I was by then a TV producer, no doubt influenced by the fascination with which he watched the small screen at home.) On Actually Existing Fascism and the Hypocrisy of the Left – LIBYA 360° By Dolores Vek With the election of Donald Trump, we’re being told that now is the time to fear fascism in America. 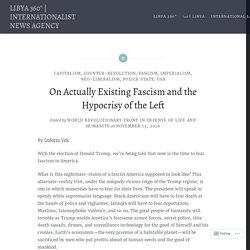 What is this nightmare-vision of a fascist America supposed to look like? This alternate-reality USA, under the uniquely vicious reign of the Trump regime, is one in which minorities have to fear for their lives. The president will speak in openly white supremacist language. Black Americans will have to fear death at the hands of police and vigilantes; latin@s will have to fear deportation; Muslims, Islamophobic violence; and so on. Political and business establishment, not Trump, will run USA. Sorry, but I find the ascent of Donald Trump more fascinating than frightening. 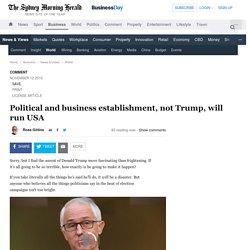 If it's all going to be so terrible, how exactly is he going to make it happen? If you take literally all the things he's said he'll do, it will be a disaster. But anyone who believes all the things politicians say in the heat of election campaigns isn't too bright. President Trump: How & Why... Jonathan Pie - Timeline. The election of Trump and the struggle ahead. 1. 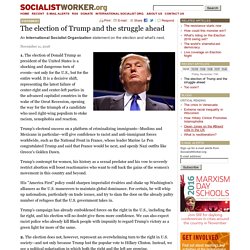 The election of Donald Trump as president of the United States is a shocking and dangerous turn of events--not only for the U.S., but for the entire world. It is a decisive shift, representing the latest failure of center-right and center-left parties in the advanced capitalist countries in the wake of the Great Recession, opening the way for the triumph of a candidate who used right-wing populism to stoke racism, xenophobia and reaction. Trump's electoral success on a platform of criminalizing immigrants--Muslims and Mexicans in particular--will give confidence to racist and anti-immigrant forces worldwide, such as the National Front in France, whose leader Marine Le Pen congratulated Trump and said that France would be next, and openly Nazi outfits like Greece's Golden Dawn. Trump's contempt for women, his history as a sexual predator and his vow to severely restrict abortion will boost reactionaries who want to roll back the gains of the women's movement in this country and beyond.

How Voter Suppression Really Works – Pacific Standard. How cartoonists around the world have reacted to Donald Trump's victory. Trump's First 100 Days: Here Is What The President-Elect Wants To Do. President-elect Donald Trump meets supporters after his acceptance speech at the New York Hilton Midtown. 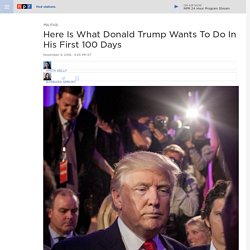 Natalie Keyssar for NPR hide caption toggle caption Natalie Keyssar for NPR President-elect Donald Trump meets supporters after his acceptance speech at the New York Hilton Midtown. At the end of October, Donald Trump spoke in Gettysburg, Pa., and released a plan for his first 100 days in office. The plan (below) outlines three main areas of focus: cleaning up Washington, including by imposing term limits on Congress; protecting American workers; and restoring rule of law. 5 Reasons Why Trump Will Win.

Friends: I am sorry to be the bearer of bad news, but I gave it to you straight last summer when I told you that Donald Trump would be the Republican nominee for president. 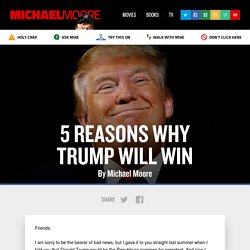 And now I have even more awful, depressing news for you: Donald J. Trump is going to win in November.