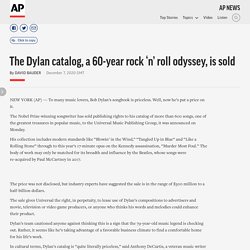 Well, now he’s put a price on it. 'Right now, hit songwriters are driving Ubers' Charlie Watts: Rolling Stones drummer dies at 80. Edgar Wright's documentary The Sparks Brothers is a tribute to the most influential band you've never heard of. They've been around for 50 years, released 25 largely acclaimed albums, and their movie musical Annette – starring Adam Driver and Marion Cotillard – will open the prestigious Cannes Film Festival next month. 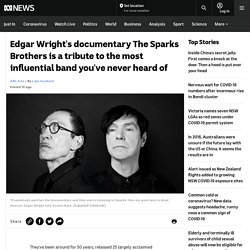 Yet outside of music heads and pop connoisseurs, LA art rockers Sparks – brothers Russell and Ron Mael – still feel relatively unknown to the wider world. "They're part of the musical ecosystem," says alt rock star Beck, one of the many talking heads gathered for director Edgar Wright's new documentary about the group. "They may have given birth to other bands that don't even know that the lineage goes back to them. " Wright, the British director behind Baby Driver, Shaun of the Dead and Scott Pilgrim vs the World, is nothing if not a fanboy, and The Sparks Brothers is a work of obvious enthusiasm – a film designed to enshrine its subjects in the pop culture hall of fame.

Sparks' brand of eccentric art pop was a peculiar proposition, even in the camped-up world of early-70s glam rock. In the Air Tonight's influence, intrigue, and THAT drum break that endures 40 years on. It takes three minutes and forty seconds before the signature moment arrives. 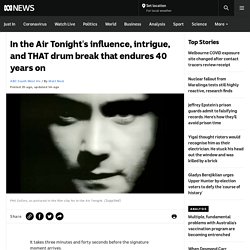 When the Spice Islands began to be forgotten, music became the Moluccans' last resort. It was once fought over by the Europeans for its abundance of nutmeg and cloves — giving it the nickname the "Spice Islands" — but the Indonesian province of Maluku has largely been forgotten this century. 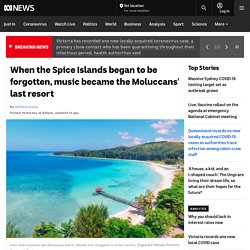 Maluku, anglicised as the Moluccas, is predominately populated by Melanesians and located in the middle of the broad and blurry Wallace Line, with West Papua its closest neighbour. It is made up of thousands of mostly tiny islands that are some of the least populated and developed in Indonesia. But despite its untouched beauty and palm-lined beaches, the remote province is rarely visited. Max Pattinama from the Provincial Tourism Office says the area has huge tourism potential, but the central government has left it behind. "Maluku is not included in the 10 priority tourism destinations, the new Bali, that the Indonesian government is creating now," he said.

And one way they could do that is through its thriving music scene. Music keeps the Moluccas alive. Rolling Stone's 500 'greatest albums of all time' list makes us question the meaning of classic - ABC News. Supertramp / Roger Hodgson - The Logical Song. 30 Music Festivals in Australia To Experience Before You Die [2020] Music, memory and emotion are interwoven. Here's why a song can spark a vivid recollection - ABC News. If this music gives you goosebumps, you might have a special brain. 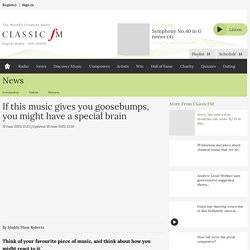 If you’re having trouble, have a listen to this spine-tingling performance of ‘Lux Aeterna’, a vocal rendition of Elgar’s ‘Nimrod’, by Voces8: Did you feel chills, a lump in your throat, or perhaps a tingling sensation on the back of your neck? Then you might have a more unique brain than you think. A study, carried out by PHD student Matthew Sachs at the University of Southern California, has revealed that people who get chills from music might have structural differences in their brain. The research studied 20 students, who listened to three to five pieces of music. “[The ten who felt shivers] have a higher volume of fibres that connect their auditory cortex to the areas associated with emotional processing, which means the two areas communicate better,” Matthew told Neuroscience News.

Read more about the study here. Brain connectivity reflects human aesthetic responses to music. We use cookies to enhance your experience on our website.By continuing to use our website, you are agreeing to our use of cookies. 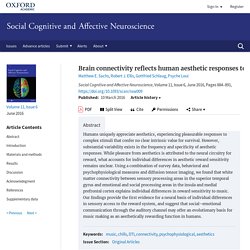 You can change your cookie settings at any time. <a href=" Find out more</a> Little Richard, rock'n'roll pioneer, dies aged 87. Little Richard, one of the pioneers of the first wave of rock’n’roll, has died. 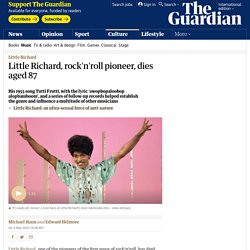 He was 87. Richard, whose real name was Richard Penniman, was born in Macon, Georgia in December 1932. He had been in poor health for several years, suffering hip problems, a stroke and a heart attack. The Beatles' handwritten Hey Jude lyrics sell for $910,000 at auction. Paul McCartney’s handwritten lyrics to The Beatles’ hit song Hey Jude has sold for $910,000, nine times its original estimate, auction house Julien’s Auctions said. 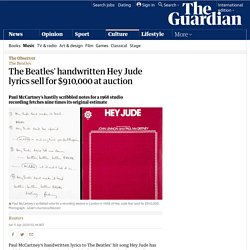 A vintage bass drumhead with The Beatles’ logo that was used during the English band’s first North American tour in 1964 was another top item in the auction, selling for $200,000. The lyrics and guitar were among more than 250 items of Beatles memorabilia offered in an online auction on Friday by Julien’s Auctions in New York to mark the 50th anniversary of the band’s breakup. A drawing by John Lennon and wife Yoko Ono called Bagism, a term they coined to satirise stereotyping, sold for $93,750, while an ashtray used by the Fab Four’s drummer Ringo Starr at the Abbey Road recording studios in London fetched $32,500. Bill Withers, influential soul singer behind Ain't No Sunshine, dies aged 81.

Bill Withers, the influential US soul singer who wrote Lean on Me, Ain’t No Sunshine and Lovely Day has died aged 81 of heart complications, according to a statement from his family. 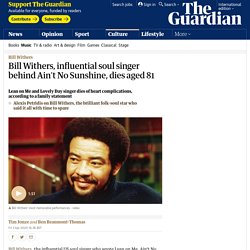 Withers wrote and recorded several other major hits including Use Me and Just the Two of Us, before retiring in the mid-1980s and staying out of the public eye. He is survived by his wife Marcia Johnson and their two children, Todd and Kori. The family statement reads: We are devastated by the loss of our beloved, devoted husband and father. A solitary man with a heart driven to connect to the world at large, with his poetry and music, he spoke honestly to people and connected them to each other. 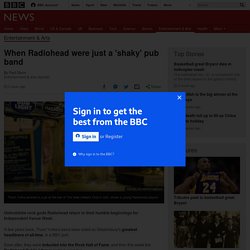 Catharsis queen: how Billie Eilish became the voice of Gen Z – and the Grammys. Just before Billie Eilish won album of the year at the Grammys on Sunday night, she was caught on camera. “Please don’t be me, please,” she appeared to be saying, as if appalled by her own success. It had been an extraordinary evening. The 18-year-old whispery pop innovator swept all of the “big four” categories – album of the year, record of the year, song of the year and best new artist – with her debut album When We All Fall Asleep, Where Do We Go?. The Top 20 Spaghetti Western Soundtracks - The Spaghetti Western Database. Earlier in 2017 we started a nominating process in which many members of our community suggested the best overall spaghetti westerns. It was a daunting challenge, as it is almost impossible to consider the music independently from the movies that made these tunes famous. It was a foregone conclusion therefore, that many soundtracks in the following list (the result of a further four week voting period) matches the Top 20 of films very closely.

To get an even better picture of the music that defined the genre of the Spaghetti Western so well and to give credit to the great composers and musicians, it was agreed that there would be an alternative top 20 compiled from among those that did not make this cut below. We will post that shortly. Untitled. Forest sonata: listening to the music of the trees. What is the music of trees? German artist Bartholomäus Traubeck spun slices of logs on turntables that translate their textures and annual rings into music. Traubeck calls the result Years, and I played it to my Composition Seminar to see how students responded. Every song has a color – and an emotion – attached to it.

Here is a list of 15 best free music notation software for Windows. Chord Designer - reverse chord generator. Gibson EDS-1275. Informal Music Making and Well-Being. The Backson Society - One Act Begins It All. The Otherwise. Tone-and-pulse. September [sound recording] / September. - Version details. Blackout. Radio Garden. #1 Song On Your Birthday. Find Your Vocal Range & Famous Singer Match. Science Says Guitar Players' Brains Are Actually Different From Everybody Else's. There’s nothing quite like picking up a guitar and strumming out some chords. Listening to someone playing the guitar can be mesmerising, it can evoke emotion and a good guitar riff can bring out the best of a song. Many guitar players find a soothing, meditative quality to playing, along with the essence of creating music or busting out an acoustic version of their favourite song. But how does playing the guitar affect the brain?

More and more scientific studies have been looking into how people who play the guitar have different brain functions compared to those who don’t. These are factually the 10 best cello pieces in existence. Watch this child genius correctly identify all the notes in an atonal double polychord. 1001 Albums You Must Hear Before You Die. String Theory Animation. Daniel Hope. Interview rare de Mark Hollis / Talk Talk. This is the oldest melody in existence – and it’s utterly enchanting. Peter Gabriel Sings Genesis Song In Concert For First Time In 34 Years. John Mayer's Weird New Low-Budget Video Is A Meme-Worthy Masterpiece. Experienced Dandenongs cellist. For lessons or weddings performances. Australian Music Centre : Breaking Sound Barriers. Asturias - Isaac Albeniz Lesson. Song list / Difficulty rating · classicalguitarblogger.com. 1966 Vs. 1971: When 'Rock 'n' Roll' Became 'Rock,' And What We Lost : The Record.

The Generic Male 80s New Wave and Alternative Music Streaming Radio Page is Here! - Generic Male DJs 80s New Wave and Alternative Music. Our Work - APE: Artists Project Earth. The Movie Soundtrack Database. Justin Lawson - Beat back sample pack — Justin Lawson. Youtube. Let It Be. THE BEATLES LYRICS - Tomorrow Never Knows. THE BEATLES LYRICS - Within You Without You. While My Guitar Gently Weeps Tab by The Beatles. Quincy Jones: 'The Beatles were the worst musicians in the world' The David Gilmour Guitar Collection. David Bowie in Australia: an alien from another planet, singing for this one. David Bowie: legendary rock star dies of cancer aged 69 – latest updates.