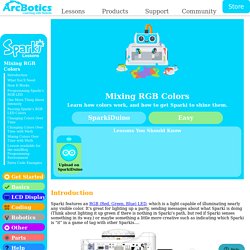 It’s great for lighting up a party, sending messages about what Sparki is doing (Think about lighting it up green if there is nothing in Sparki’s path, but red if Sparki senses something in its way.) or maybe something a little more creative such as indicating which Sparki is “it” in a game of tag with other Sparkis…. We’re going to learn a little bit more about this output and how to use. Although to call it an output is a little misleading, it’s really three different outputs in one package! What You’ll Need A Sparki. How It Works RGB LED stands for Red, Green and Blue Light Emitting Diode. You can get an idea about how the colors are combined in an RGB LED by looking at the following picture: There are actually three different LEDs inside the RGB LED. 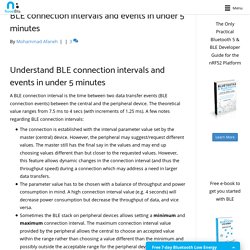 The theoretical value ranges from 7.5 ms to 4 secs (with increments of 1.25 ms). A few notes regarding BLE connection intervals: The connection is established with the interval parameter value set by the master (central) device. However, the peripheral may suggest/request different values. The master still has the final say in the values and may end up choosing values different than but closer to the requested values. nRF Sniffer for Bluetooth LE - nordicsemi.com. Device disconnects randomly. BLE_HCI_CONNECTION_TIMEOUT and NRF_CLOCK_LF_XTAL_ACCURACY_XX_PPM. Nordic Semiconductor Infocenter. Optimizing Power on nRF52 Designs - Nordic Blog - Nordic Blog. nRF51822 #16: secure DFU OTA via BLE (english) 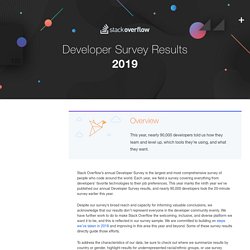 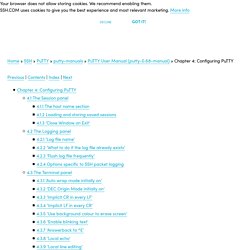 PuTTY is configured using the control panel that comes up before you start a session. Some options can also be changed in the middle of a session, by selecting ‘Change Settings’ from the window menu. 4.1 The Session panel The Session configuration panel contains the basic options you need to specify in order to open a session at all, and also allows you to save your settings to be reloaded later. 4.1.1 The host name section The top box on the Session panel, labelled ‘Specify your connection by host name’, contains the details that need to be filled in before PuTTY can open a session at all. The ‘Host Name’ box is where you type the name, or the IP address, of the server you want to connect to. Batch Script - Quick Guide. Advertisements Batch Script is incorporated to automate command sequences which are repetitive in nature. 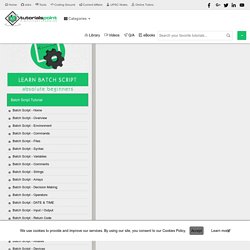 Scripting is a way by which one can alleviate this necessity by automating these command sequences in order to make one’s life at the shell easier and more productive. In most organizations, Batch Script is incorporated in some way or the other to automate stuff. Some of the features of Batch Script are − 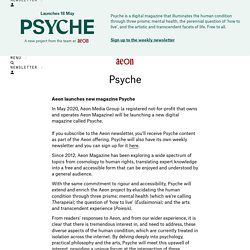 If you subscribe to the Aeon newsletter, you’ll receive Psyche content as part of the Aeon offering. Psyche will also have its own weekly newsletter and you can sign up for it here. Since 2012, Aeon Magazine has been exploring a wide spectrum of topics from cosmology to human rights, translating expert knowledge into a free and accessible form that can be enjoyed and understood by a general audience. Home - ES Systems. Use Software Filters To Reduce ADC Noise. Reading Battery Voltage with the STM32’s ADC – Vivonomicon's Blog.

If you choose to pursue embedded development beyond the occasional toy project, it probably won’t take long before you want to design something which runs off of battery power.

Many types of devices would not be useful if they had to be plugged into a wall outlet all the time, and power efficiency is one of the biggest advantages that microcontrollers still have over application processors like the one in a Raspberry Pi. YouTube. Software way of filtering adc? : C_Programming. ADC Filtering Algorithm. As many have noted the FMD/Fx ADC readings dance around a bit from sample to sample. 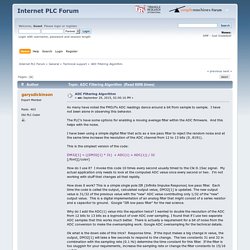 I have not been alone in observing this behavior. The PLC's have some options for enabling a moving average filter within the ADC firmware. And this helps with the noise. I have been using a simple digital filter that acts as a low pass filter to reject the random noise and at the same time increase the resolution of the ADC channel from 12 to 13 bits (0..8191). Notifications/Wearing Time - Data Journey. 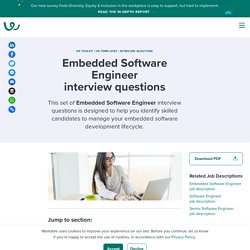 They are responsible for building high-quality, fully functional embedded software systems, aligned with coding and design standards. During your interview process, you should focus on your candidates’ hands on experience with software engineering and coding techniques. Ask them about hardware management, OS system configuration and debugging code. As with any technical role, it’s useful to include an assignment to test your candidates’ relevant skills with a real project. 10 Essential Embedded Software Engineering Interview Questions and Answers. On the high end of cost and complexity, wireless communication can be implemented using one of the wifi standards. 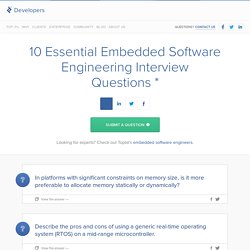 These offer great bandwidth, are interoperable with many other devices, and can be long-range. But wifi standards are also fairly complex and require dedicated hardware. Bluetooth is a reasonable choice for interfacing between different types of hardware over short distances, i.e., those of up to 15 yards (~14 meters). It also requires specialized hardware, but such hardware is usually cheap and simple to use. Firmware Test Engineer Skills. More Than Efficient Lighting: An Effective LED Driver Using an 8-Bit M. In today’s energy-conscious environment, LEDs are often favored over conventional light sources. This is because of their inherent low power and long life. In addition to this, since LEDs are solid-state lighting (SSL), they can be dimmed, allowing the user to create fantastic lighting effects while reducing the overall power consumption.

Obtaining these benefits from LEDs requires an effective LED driver. The LED driver’s effectiveness is linked to its ability to provide an efficient energy source, to ensure LED’s optimal performance and to maintain the long life of LEDs, even both as the driver keeps the LED output intensity constant and while changing intensity. Wearables as second galvanic skins - EDN.