(9) How police are using facial recognition on civilians. Twitter. Google ‘fixed’ its racist algorithm by removing gorillas from its image-labeling tech. Back in 2015, software engineer Jacky Alciné pointed out that the image recognition algorithms in Google Photos were classifying his black friends as “gorillas.”

Google said it was “appalled” at the mistake, apologized to Alciné, and promised to fix the problem. But, as a new report from Wired shows, nearly three years on and Google hasn’t really fixed anything. The company has simply blocked its image recognition algorithms from identifying gorillas altogether — preferring, presumably, to limit the service rather than risk another miscategorization. Wired says it performed a number of tests on Google Photos’ algorithm, uploading tens of thousands of pictures of various primates to the service. Baboons, gibbons, and marmosets were all correctly identified, but gorillas and chimpanzees were not. A spokesperson for Google confirmed to Wired that the image categories “gorilla,” “chimp,” “chimpanzee,” and “monkey” remained blocked on Google Photos after Alciné’s tweet in 2015. Comparing Faces in Images - Amazon Rekognition. Currently we are only able to display this content in English. 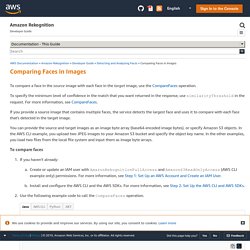 To compare a face in the source image with each face in the target image, use the CompareFaces operation. To specify the minimum level of confidence in the match that you want returned in the response, use similarityThreshold in the request. For more information, see CompareFaces. If you provide a source image that contains multiple faces, the service detects the largest face and uses it to compare with each face that's detected in the target image. You can provide the source and target images as an image byte array (base64-encoded image bytes), or specify Amazon S3 objects. About Face ID advanced technology. The technology that enables Face ID is some of the most advanced hardware and software that we’ve ever created. 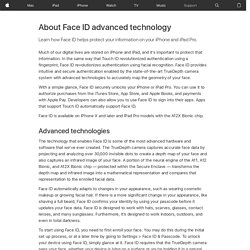 The TrueDepth camera captures accurate face data by projecting and analyzing over 30,000 invisible dots to create a depth map of your face and also captures an infrared image of your face. A portion of the neural engine of the A11, A12 Bionic, and A12X Bionic chip — protected within the Secure Enclave — transforms the depth map and infrared image into a mathematical representation and compares that representation to the enrolled facial data. Face ID automatically adapts to changes in your appearance, such as wearing cosmetic makeup or growing facial hair. If there is a more significant change in your appearance, like shaving a full beard, Face ID confirms your identity by using your passcode before it updates your face data.

Face ID is designed to work with hats, scarves, glasses, contact lenses, and many sunglasses. To start using Face ID, you need to first enroll your face. Amazon needs to come clean about racial bias in its algorithms. Facial recognition technology: The need for public regulation and corporate responsibility. All tools can be used for good or ill. Even a broom can be used to sweep the floor or hit someone over the head. The more powerful the tool, the greater the benefit or damage it can cause. The last few months have brought this into stark relief when it comes to computer-assisted facial recognition – the ability of a computer to recognize people’s faces from a photo or through a camera. This technology can catalog your photos, help reunite families or potentially be misused and abused by private companies and public authorities alike. Facial recognition technology raises issues that go to the heart of fundamental human rights protections like privacy and freedom of expression. 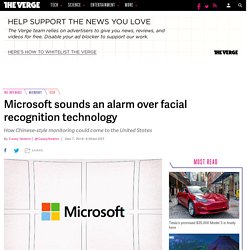 With 200 million surveillance cameras — more than four times as many in the United States — China’s facial-recognition systems track members of the Uighur Muslim minority, block the entrances to housing complexes, and shame debtors by displaying their faces on billboards. I often include these stories here because it seems inevitable that they will make their way to the United States, at least in some form. But before they do, a coalition of public and private interests are attempting to sound the alarm. AI Now is a group affiliated with New York University that counts as its members employees of tech companies including Google and Microsoft.

In a new paper published Thursday, the group calls on governments to regulate the use of artificial intelligence and facial recognition technologies before they can undermine basic civil liberties. 2011 Stanley Cup Game 7 Canucks Fan Zone.