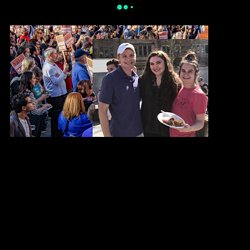 But when all else fails, go for the gut. Yale University's local College Republicans chapter held a barbecue on Friday near the fasting site of campus union organizers participating in a hunger strike directed against the university. Trump Pulls Back Obama-Era Protections For Women Workers. With little notice, President Donald Trump recently signed an executive order that advocates say rolls back hard-fought victories for women in the workplace. 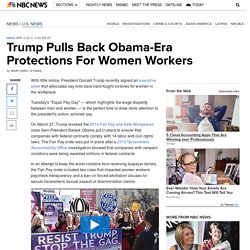 Tuesday's "Equal Pay Day" — which highlights the wage disparity between men and women — is the perfect time to draw more attention to the president's action, activists say. On March 27, Trump revoked the 2014 Fair Pay and Safe Workplaces order then-President Barack Obama put in place to ensure that companies with federal contracts comply with 14 labor and civil rights laws.

The Fair Pay order was put in place after a 2010 Government Accountability Office investigation showed that companies with rampant violations were being awarded millions in federal contracts. Trump's Plan to Gut Obama's Climate Policies: What You Need to Know. Andrew Harrer/CNP via ZUMA Wire President Donald Trump will issue his long-promised executive order rolling back federal government efforts to fight climate change Tuesday. 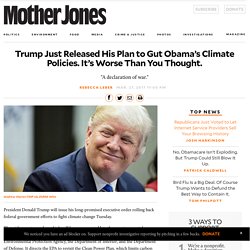 The wide-ranging order, which will be accompanied by other environmental directives, targets Obama-era policies across the government, including in the Environmental Protection Agency, the Department of Interior, and the Department of Defense. It directs the EPA to revisit the Clean Power Plan, which limits carbon pollution from power plants and was considered the centerpiece of former President Barack Obama's climate policy. Additionally, Trump is asking the Justice Department to stop defending the plan in court.

The president will instruct agencies to rescind a moratorium on coal leasing on public lands; rewrite limits on methane emissions from the oil and gas industry; and ignore the EPA's current calculation on the costs of carbon pollution. Labor nominee Acosta cut deal with billionaire guilty in sex abuse case. There was once a time — before the investigations, before the sexual abuse conviction — when rich and famous men loved to hang around with Jeffrey Epstein, a billionaire money manager who loved to party. 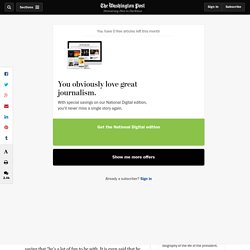 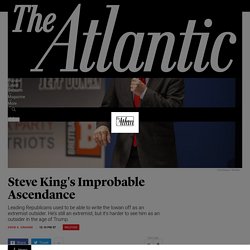 Steve King has always made a habit of speaking his mind, and quite frequently his mind has been controversial, blatantly false, or outright racist. The Republican congressman from Iowa is the man who said in 2013 that while some children brought to the U.S. illegally were good kids, there were others “who weigh 130 pounds and they’ve got calves the size of cantaloupes because they’re hauling 75 pounds of marijuana across the desert.” That may have been his most famous moment, but it was hardly alone. 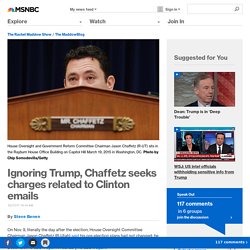 In December, he said it again. In January, he said it again. Yesterday, as the Associated Press reported, the Republican congressman took the next ridiculous step. FCC made a case for limiting cost of prison phone calls. Not anymore. Federal regulators no longer are pressing to cut the costs of most prison phone calls, backing away from a years-long effort to limit charges imposed by a handful of private companies on inmates and their families. 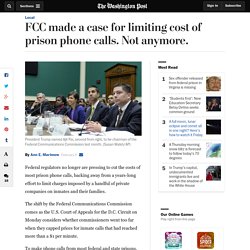 The shift by the Federal Communications Commission comes as the U.S. Court of Appeals for the D.C. Circuit on Monday considers whether commissioners went too far when they capped prices for inmate calls that had reached more than a $1 per minute. To make phone calls from most federal and state prisons, inmates generally must set up accounts with a private company to hold money deposited by family members. The companies typically have a contract with the prisons, which receive a portion of the call revenue.

Federal regulators had pushed since 2013 to lower the costs, saying the prices made it too hard for relatives to stay in touch. House Republicans Just Voted to Eliminate the Only Federal Agency That Makes Sure Voting Machines Can’t Be Hacked. In a little-noticed 6-3 vote today, the House Administration Committee voted along party lines to eliminate the Election Assistance Commission, which helps states run elections and is the only federal agency charged with making sure voting machines can’t be hacked. 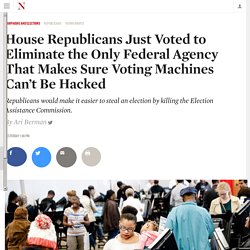 The EAC was created after the disastrous 2000 election in Florida as part of the Help America Vote Act to rectify problems like butterfly ballots and hanging chads. (Republicans have tried to kill the agency for years.) The Committee also voted to eliminate the public-financing system for presidential elections dating back to the 1970s. “It is my firm belief that the EAC has outlived its usefulness and purpose,” said Committee chair Gregg Harper (R-MS), explaining why his bill transfers the EAC’s authority to the Federal Election Commission. DEA: CBD Oil Declared Schedule 1, Claims Cannabis Product Has No Medical Benefits. According to the DEA, CBD oil is now to be considered a Schedule 1 substance. 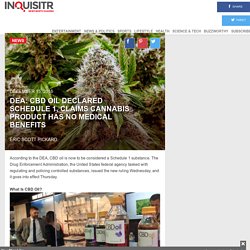 The Drug Enforcement Administration, the United States federal agency tasked with regulating and policing controlled substances, issued the new ruling Wednesday, and it goes into effect Thursday. What Is CBD Oil? CBD oil, short for cannabidiol oil, is derived from the cannabis or marijuana plant. The difference in CBD oil, however, is that it is processed from hemp plants that do no contain a large amount of tetrahydrocannabinol, or THC. Legislators’ breathtaking dis of voters. It’s both breathtaking and hardly surprising. 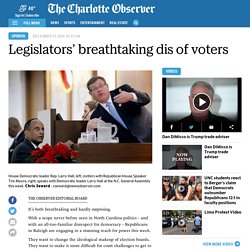 With a scope never before seen in North Carolina politics – and with an all-too-familiar disrespect for democracy – Republicans in Raleigh are engaging in a stunning reach for power this week. Alt-right leader: 'Hail Trump! Hail our people! Hail victory!' The president of the alt-right National Policy Institute Richard Spencer's remarks were posted Sunday on YouTube by "Red Ice Radio," which describes itself as "covering politics and social issues from a pro-European perspective.

" The Atlantic magazine, which is recording footage of Spencer for a documentary they're working on, also published a video of the same event showing audience members apparently giving the Nazi salute. "Hail Trump! Hail our people! Pinknews.co. A horrific ad in support of North Carolina Governor Pat McCrory depicts the rape of a little girl, in an attack on his Democratic opponent. North Carolina has lost a string of big investment ventures over Republican Governor Pat McCrory’s decision to sign the contentious HB 2 – which voided all local ordinances protecting LGBT rights, banned transgender people from using their preferred bathroom, and permits businesses to discriminate against LGBT people on the grounds of religious belief.

Limbaugh: The Left Sends Out "The Rape Police" Whenever There's Sex With "No Consent" (Also Known As Rape) RUSH LIMBAUGH: You know what the magic word, the only thing that matters in American sexual mores today is? One thing. You can do anything, the left will promote and understand and tolerate anything, as long as there is one element. Trump mocks reporter with disability. Mike Pence for Congress. The Pence Agenda for the 107th Congress: A Guide to Renewing the American Dream "Join us in our cause which is simply this; to renew the American Dream. We can renew the American dream by showing again that we can run campaigns built on a new politics of civility and mutual respect. Florida Is New Punchline to All Abortion Jokes. House Seeks Names of Fetal Tissue Researchers, Prompting Claims of Intimidation. When FOX News tries to attack Bernie... - Occupy Democrats. House Republicans seek to open up national forests to mining and logging.

Labor takes on racism in GOP "Pledge" Johnson proves to be a big spender - and taker: Firm pays him $10 million. John Boehner's push to redefine rape - War Room. Republican Secretary of State in Indiana indicted on voter fraud - National Political Buzz. How to Respond When a Congressman Calls You a Liar - Gawker. Aides To Former Maryland Gov Indicted For Ordering Calls To Suppress Votes. Venn Diagram: Rape vs. Flat Tire. GOP invites preacher who advocates jailing gays to give House prayer. GOP Freshmen On Medicare Attacks: Let's Let Bygones Be Bygones. Rep. Sally Kern (R-OK): Blacks Are In Prison Because They Don't Want To Work Hard. Jon Kyl Is Sorry If He Gave Anyone The Impression That The Things He Says In Public Are Factual. Rep. Gingrey promises GOP will make "covenant with Moses" signed in blood not to raise taxes on rich.