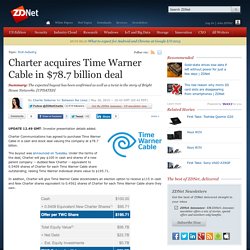 Here's Big Cable's plan to stop the FCC's net neutrality rules. It was a moment big broadband providers have been anticipating for weeks. 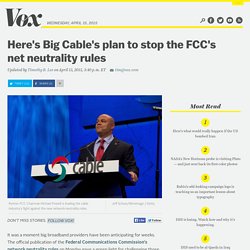 The official publication of the Federal Communications Commission's network neutrality rules on Monday gave a green light for challenging those rules in court. This week, industry groups representing almost every type of internet service provider have filed lawsuits arguing that the FCC's new regulations are illegal. If these lawsuits succeed, they could strip the FCC of legal authority to establish strong net neutrality protections. The groups won't be required to spell out their legal arguments until later in the legal process. But this week I talked to two industry insiders — including Michael Powell, who represents the cable industry as the head of the National Cable and Telecommunications Association — to get a preview of the industry's arguments.

The lawsuits will include a direct attack on the legal foundations of the FCC order: the decision to regulate internet access like a public utility. Google Fiber plans expansion, then TWC makes speeds six times faster. With Google Fiber preparing an expansion into Charlotte, North Carolina, incumbent cable operator Time Warner Cable is trying to hold onto customers by dramatically increasing Internet speeds at no extra charge. 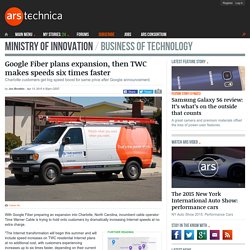 "The Internet transformation will begin this summer and will include speed increases on TWC residential Internet plans at no additional cost, with customers experiencing increases up to six times faster, depending on their current level of Internet service," Time Warner Cable announced last week. Thomas Pyle: The Iowa Caucuses Have a Winner: Ethanol. Employers Can Legally Lie to Workers, Court Rules. Why is Comcast so bad: Won’t let you cancel their service. Dale Russakoff: A Test for School Reform in Newark.

Late one night in December, 2009, a black Chevy Tahoe in a caravan of cops and residents moved slowly through some of the most dangerous neighborhoods of Newark. 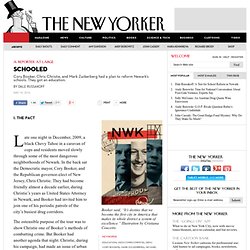 News - 30,000-year-old giant virus 'comes back to life' An ancient virus has "come back to life" after lying dormant for at least 30,000 years, scientists say. 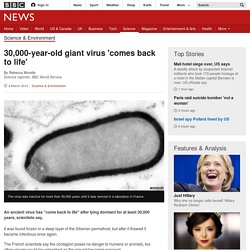 It was found frozen in a deep layer of the Siberian permafrost, but after it thawed it became infectious once again. NC regulators shielded Duke's coal ash pollution. RALEIGH, N.C. 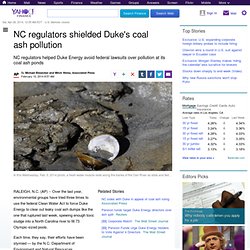 (AP) -- Over the last year, environmental groups have tried three times to use the federal Clean Water Act to force Duke Energy to clear out leaky coal ash dumps like the one that ruptured last week, spewing enough toxic sludge into a North Carolina river to fill 73 Olympic-sized pools. Each time, they say, their efforts have been stymied — by the N.C. Department of Environment and Natural Resources. 'Shared Sacrifice': Hostess Used Employee Pensions to Fund Itself. See if you can spy the “shared sacrifice” in this story. 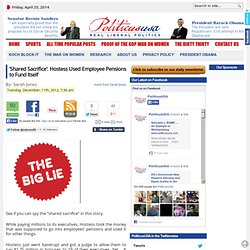 The main baker pension fund alone is missing $22.1 million. Here's How AT&T Is Planning to Rob Americans of an Open Public Telco Network. Report: data caps just a “cash cow” for Internet providers. Why do so many Americans now live with Internet data caps—and what are these caps doing to the future of broadband? Those are the questions posed by a new paper from the New America Foundation, which wants to shake up the lethargy that has descended over the data caps debate by pointing out just how odd the caps truly are. Yovany Gonzalez's Wells Fargo Lawsuit Alleges Bank Fired Him, Cut Dying Daughter's Health Insurance. Wells Fargo allegedly fired an employee because his dying daughter needed expensive cancer treatment, according to a lawsuit filed in Palm Beach County Court on Thursday. 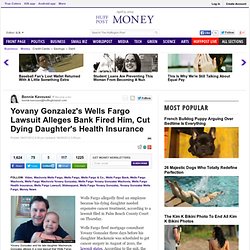 Wells Fargo fired mortgage consultant Yovany Gonzalez three days before his daughter Mackenzie was scheduled to get cancer surgery in August of 2010, the lawsuit states. According to the suit, the hospital canceled the surgery because Mackenzie no longer was covered by health insurance. She died of cancer in March of 2011. Before Gonzalez was fired, Wells Fargo and United Health Care, the health insurer, asked Gonzalez's wife "numerous questions" about Mackenzie's treatment and made "several references ... to the costs of her treatment," the lawsuit states. Killing Libby  Nick Hanauer TED Presentation About Why Rich People Aren't Job Creators. Liberating America's secret, for-pay laws. [Editor's note: This morning, I found a an enormous, 30Lb box waiting for me at my post-office box. 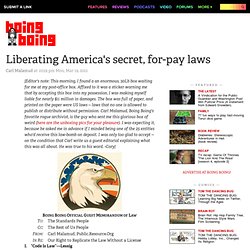 The Myth of the Free-Market American Health Care System - Megan McArdle - Business. What the rest of the world can teach conservatives -- and all Americans -- about socialism, health care, and the path toward more affordable insurance Reuters Yesterday, Pascal-Emmanuel Gobry posted a stimulating comparison between the American and French health-care systems. 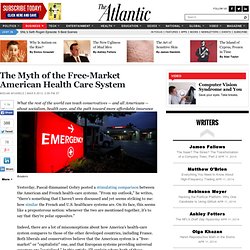 Americans Elect: The Truth Behind the Corporate Scheme to Swipe the 2012 Election : Jane Jacobs and the Problem of Monstrous Hybrids. Timothy Karr: The Fate of the Internet. The Wall Street Journal just reported that the Federal Communications Commission is holding "closed-door meetings" with industry to broker a deal on Net Neutrality -- the rule that lets users determine their own Internet experience.

One is that, despite the ample publicity Wal-Mart has engineered for its "buy local" efforts, the company in fact has zero interest in cultivating local suppliers beyond stocking a few token local veggies suitable for a nice photo-op. Children of the Corn: GMOs Don't Qualify As Food. May-28-2011 21:30. Don Blankenship: The Dark Lord of Coal Country. John Boehner Backed Deregulation Of Online Learning, Leading To Explosive Growth At For-Profit Colleges. Smoking is cost-effective, says report. GE’s Immelt Advises President on Jobs and Competiveness, Exports Jobs and Technology to China. U.S. Files Complaint to Block AT&T, T-Mobile Merger. Documentary General- Motors- History = Taken- for- a -Ride.

Related:  Conspiracies, more of them...   -  US of A and What You may Face   -  Police Handling Assembling & Demonstrations   -  Americans Elect: The Truth Behind the Corporate Scheme to Swipe the 2012 Election :   -  Education   -  Enterprise