Keratan sulfate - Wikipedia. Structure[edit] Like other glycosaminoglycans keratan sulfate is a linear polymer that consists of a repeating disaccharide unit. 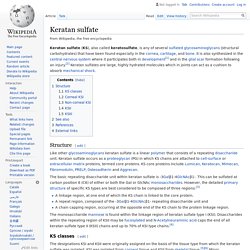 Keratan sulfate occurs as a proteoglycan (PG) in which KS chains are attached to cell-surface or extracellular matrix proteins, termed core proteins. KS core proteins include Lumican, Keratocan, Mimecan, Fibromodulin, PRELP, Osteoadherin and Aggrecan. The basic repeating disaccharide unit within keratan sulfate is -3Galβ1-4GlcNAcβ1-. This can be sulfated at carbon position 6 (C6) of either or both the Gal or GlcNAc monosaccharides. A linkage region, at one end of which the KS chain is linked to the core protein.A repeat region, composed of the -3Galβ1-4GlcNAcβ1- repeating disaccharide unit andA chain capping region, occurring at the opposite end of the KS chain to the protein linkage region.

The monosaccharide mannose is found within the linkage region of keratan sulfate type I (KSI). KS classes[edit] Corneal KSI[edit] Non-corneal KSI[edit] KSII[edit] KSIII[edit] Asymmetry in Embryonic development. At first glance, the left and right sides of our bodies are identical to one-another. 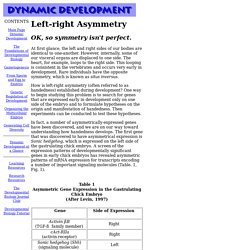 However, internally, some of our visceral organs are displaced to one side. The heart, for example, loops to the right side. Electrical conduction system of the heart. Principle of ECG formation. 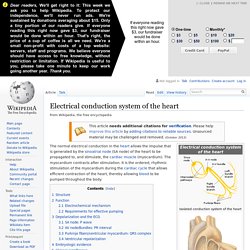 Note that the red lines represent the depolarization wave, not bloodflow. The normal electrical conduction in the heart allows the impulse that is generated by the sinoatrial node (SA node) of the heart to be propagated to, and stimulate, the cardiac muscle (myocardium). The myocardium contracts after stimulation. PP 3 Pump - Biological Sciences 119 with Martin at Rutgers University - New Brunswick/Piscataway - StudyBlue. Embryology cardiovascular system (heart development) Part XIV: Evolution of Phototransduction, Vertebrate Photoreceptors and Retina by Trevor Lamb. 1 Introduction “Nothing in biology makes sense except in the light of evolution” (1). 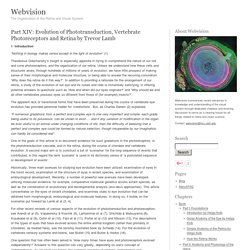 Theodosius Dobzhansky’s insight is especially apposite in trying to comprehend the nature of our rod and cone photoreceptors, and the organization of our retina. Unless we understand how these cells and structures arose, through hundreds of millions of years of evolution, we have little prospect of making sense of their morphological and molecular structure, or being able to answer the recurring conundrum ‘Why does the retina do it this way?’. In addition to providing a rationale for the arrangement of our retina, a study of the evolution of our eye and its cones and rods is immensely satisfying, in offering potential answers to questions such as ‘How and when did our eyes originate?’

And ‘Why should we and all other vertebrates possess eyes so different from those of (for example) insects?’. One question that has often been asked is ‘How many times have eyes and photoreceptors evolved independently?’ Mic-UK: Amoebas are more than just blobs. Advanced - Cardiac Looping - Embryology. Cardiac looping occurs from late in the fourth week to early in the fifth week and has been studied in great detail in chick embryos whose initial, straight heart tube is representative of that developing in humans. 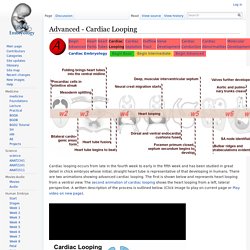 There are two animations showing advanced cardiac looping. The first is shown below and represents heart looping from a ventral view. The second animation of cardiac looping shows the heart looping from a left, lateral perspective. A written description of the process is outlined below. (Click image to play on current page or Play video on new page). 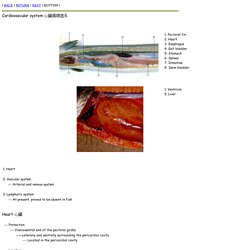 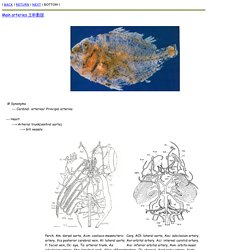 Magnetic resonance imaging of embryos: an Internet resource for the study of embryonic development. To view the full text, please login as a subscribed user or purchase a subscription. 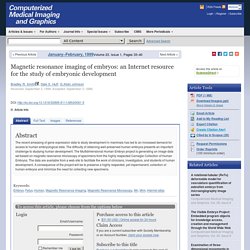 Click here to view the full text on ScienceDirect. Fig. 1 Human embryos from fourteen Carnegie stages will be scanned by MRM. Each embryo will be scanned by three pulse sequences, a T1-weighted pulse, a T2-weighted pulse and a diffusion-weighted pulse. Each of these scans will generate a three-dimensional data set that will be reformatted to produce all axial, sagittal and coronal image slices. Fig. 2 The main sample image page from the Multidimensional Human Embryo web site provides a button to bring up detailed images for each Carnegie stage of development. Fig. 3 Volume rendered images, single slice images and QuickTime® animations are available for each completed embryo.