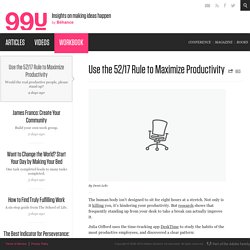 Social psychologists found that if we encounter a problem and have someone we can turn to who may have gone through a similar situation, we are more likely to overcome the challenge. Productivity 101: A Primer to the Getting Things Done (GTD) Philosophy. Self-Imposed Deadlines Don't Stop Procrastination. Here's What Might. Mark Twain advised people never to put off until tomorrow what they can put off until the day after, and a lot of us listen. 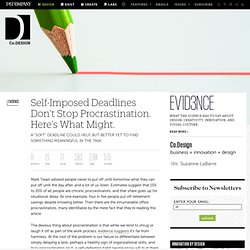 Estimates suggest that 15% to 20% of all people are chronic procrastinators, and that share goes up for situational delay: As one example, four in five people put off retirement savings despite knowing better. Then there are the innumerable office procrastinators, many identifiable by the mere fact that they're reading this article. The devious thing about procrastination is that while we tend to shrug or laugh it off as part of the work process, evidence suggests it's far from harmless. At the root of the problem is our failure to differentiate between simply delaying a task, perhaps a healthy sign of organizational skills, and truly procrastinating on it, a self-defeating habit people know will hurt them later--a little like smoking.

Don’t Do That! 3 Personal Branding Mistakes to Avoid by @KatherineKotaw. Photo Credit: Andrew Genn via Fotolia.com. 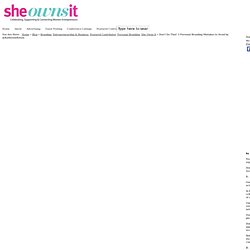 The 7 Secrets To Make Meetings Less Awful. Paul Rako: The Internet of things (IoT) will enable profound improvements in productivity. Jason Corsello: What the Internet Of Things Will Bring to the Workplace. Source: "We all live in a world dominated by networked devices — not just smartphones, but also smart coffee pots, thermostats, vacuum cleaners, running shoes, wrist bands, even smart Coke machines. 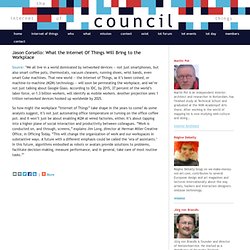 That new world — the Internet of Things, as it’s been coined, or machine-to-machine (M2M) technology — will soon be permeating the workplace, and we’re not just talking about Google Glass. According to IDC, by 2015, 37 percent of the world’s labor force, or 1.3 billion workers, will identify as mobile workers. Another projection sees 1 trillion networked devices hooked up worldwide by 2025. Convertible napping desk. 37signals Earns Millions Each Year. Its CEO’s Model? His Cleaning Lady. Managing the unexpected – On the work of Karl E. Weick and Kathleen M. Sutcliffe « Silberzahn & Jones. Karl Weick has long been known for his work on organization theory. 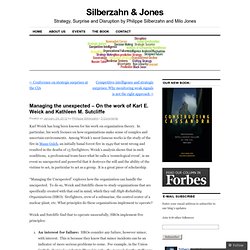 In particular, his work focuses on how organizations make sense of complex and uncertain environments. Among Weick’s most famous works is the study of the fire in Mann Gulch, an initially banal forest fire in 1949 that went wrong and resulted in the deaths of 13 firefighters. Weick’s analysis shows that in such conditions, a professional team faces what he calls a ‘cosmological event’, ie an event so unexpected and powerful that it destroys the will and the ability of the victims to act, in particular to act as a group.

How I Made Sleep a Priority—And Got More Productive - Lifestyle. When I was around 10 years old I would regularly wake up at 5 or 6 a.m. to play Nintendo before school. 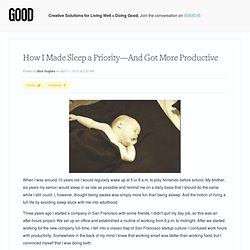 My brother, six years my senior, would sleep in as late as possible and remind me on a daily basis that I should do the same while I still could. I, however, thought being awake was simply more fun than being asleep. And the notion of living a full life by avoiding sleep stuck with me into adulthood. Three years ago I started a company in San Francisco with some friends. Learn. It all starts here, folks. 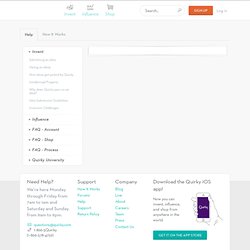 If you’ve got an incredible invention idea, submit it to our community and one day it could end up on store shelves. Check out our blog for tips on creating top notch ideas: The strongest ideas are well researched, easy to understand, and we can build them with modern technology. Whether you already have a patent or just drew your idea on a napkin this morning, we’re happy to receive it, so long as it’s a physical consumer product. To submit your idea for consideration, you first need to create an account. Once you have joined our community, submit your idea using our submission form. Pitch Your Idea. Unlimited Vacation Doesn't Create Slackers. Sharon Rosenblatt confesses she suffers from self-diagnosed workplace paranoia--and even her company's unrestricted vacation policy sometimes (negatively) affects her psyche.

A contractor who serves as communications and accessibility support at Accessibility Partners, Rosenblatt operates under the edict, "as long as you get your work done, it doesn't matter where you do it.” Sounds nice--but what it can mean is checking email multiple times per day on weekends and on vacation. “I once wrote part of a federal proposal response while I was stuck in traffic on the George Washington Bridge because my client extended our services into my vacation time.” 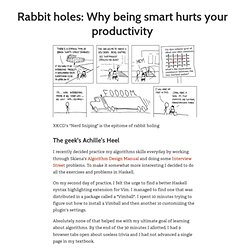 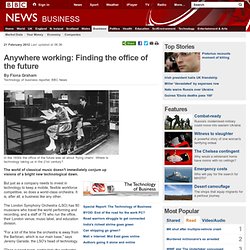 Where is technology taking us in the 21st century? Hack Your Productivity: A Time-Management Geek's 10-Minute Solution. I just had the most productive week ever. 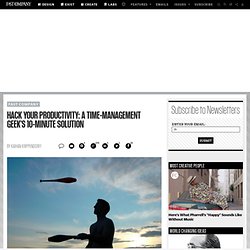 I am a bit of a time-management geek. Study in Courage: the “Done Manifesto” Maybe you’ve seen it because it came out in 2009. But I hadn’t… until Cliff Huang at Fast Company’s co.design brought it to the attention of one of our agencies’ designers. Suddenly we were all voting on which of the 13 rules for realizing your creative vision resonated with each of us and the truth is that in our design firm, just about all of them did.