Mensch-Maschine-Interaktion: Vom Roboter gepflegt. Digital Brain Health Market Report: Assess, Enhance Cognition. Towards a new mode of self-tracking. In a conference paper and my forthcoming book The Quantified Self: A Sociology of Self-Tracking Cultures, I identify five modes of self-tracking. 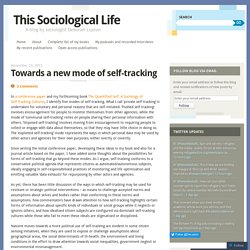 What I call ‘private self-tracking’ is undertaken for voluntary and personal reasons that are self-initiated. ‘Pushed self-tracking’ involves encouragement for people to monitor themselves from other agencies, while the mode of ‘communal self-tracking’ relies on people sharing their personal information with others. ‘Imposed self-tracking’ involves moving from encouragement to requiring people to collect or engage with data about themselves, so that they may have little choice in doing so. The Interactive Activation and Competition Network: How Neural Networks Process Information. Copyright © Simon Dennis, 1997. * These sections contain some mathematics which can be omitted on a first reading if desired. 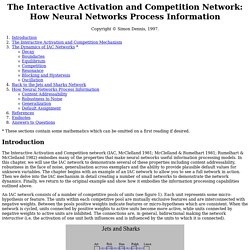 Introduction The Interactive Activation and Competition network (IAC, McClelland 1981; McClelland & Rumelhart 1981; Rumelhart & McClelland 1982) embodies many of the properties that make neural networks useful information processing models. In this chapter, we will use the IAC network to demonstrate several of these properties including content addressability, robustness in the face of noise, generalisation across exemplars and the ability to provide plausible default values for unknown variables. The chapter begins with an example of an IAC network to allow you to see a full network in action. A New Cluster Based Fuzzy Model Tree for Data Modeling. This paper proposes a fuzzy model tree, so-called c-fuzzy model tree, consisting of local linear models using fuzzy cluster for data modeling. 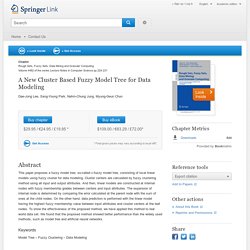 Cluster centers are calculated by fuzzy clustering method using all input and output attributes. And then, linear models are constructed at internal nodes with fuzzy membership grades between centers and input attributes. The expansion of internal node is determined by comparing the error calculated at the parent node with the sum of ones at the child nodes. On the other hand, data prediction is performed with the linear model having the highest fuzzy membership value between input attributes and cluster centers at the leaf nodes.

To show the effectiveness of the proposed method, we have applied this method to real world data set. More cars than phones were connected to cell service in Q1. Millions of people in the United States have mobile phones, and we’ve had them for years. 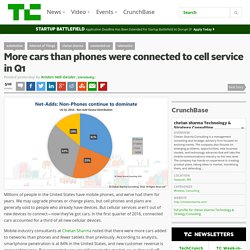 We may upgrade phones or change plans, but cell phones and plans are generally sold to people who already have devices. But cellular services aren’t out of new devices to connect—now they’ve got cars. In the first quarter of 2016, connected cars accounted for a third of all new cellular devices. Mobile-industry consultants at Chetan Sharma noted that there were more cars added to networks than phones and fewer tablets than previously. According to analysts, smartphone penetration is at 84% in the United States, and new customer revenue is approaching zero. AT&T has 8 million cars on its network, “probably the highest of any mobile operator in the world,” the report said, and it’s adding more cars than all other operators combined. Intelligent agent - Wikipedia. Simple reflex agent Intelligent agents are often described schematically as an abstract functional system similar to a computer program. 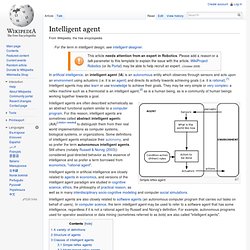 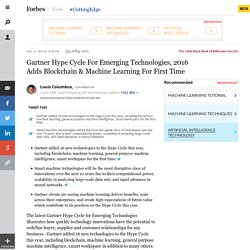 When consumers don't have a lot of time to make a decision, they tend to focus on a few key criteria or product attributes. 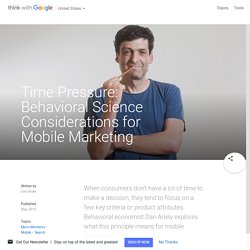 Behavioral economist Dan Ariely explores what this principle means for mobile marketers. Written by Dan Ariely Published May 2016 Topics. Google DeepMind. Ifttt the beginning... I’d like to humbly announce that the first beta invites for a project I’m incredibly excited about are out the door. 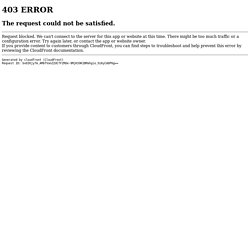 The project is called ifttt, shorthand for “if this then that”. With this blog I hope to begin fleshing out some of the initial inspirations that led to the inception of ifttt and provide you with a taste of how ifttt can help put the internet to work for you. A few years ago I became passionate about visualizing data and began experimenting with small projects that filtered and presented information in interesting ways. While these projects were met with moderate success, they provided me ample opportunity to think about how technology was shaping our behavior and what being creative in an increasingly digital world could mean.

One evening, waiting in line to order Indian food, I was lost in thought about an event-driven programming problem when something clicked in a funny way. Now for that click. Thanks for reading and we can’t wait to hear what you think.Linden Tibbets. ERP im Kontext von Industrie 4.0. Objekte (z. 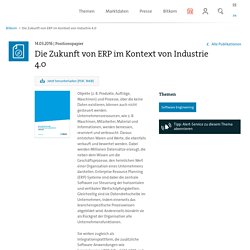 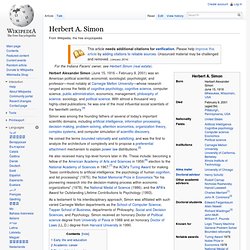 With almost a thousand very highly-cited publications, he was one of the most influential social scientists of the twentieth century.[4] Simon was among the founding fathers of several of today's important scientific domains, including artificial intelligence, information processing, decision-making, problem-solving, attention economics, organization theory, complex systems, and computer simulation of scientific discovery. He also received many top-level honors later in life. Early life and education[edit]