Augmented Reality in the Browser with Awe.js. Augmented reality is a neat concept. 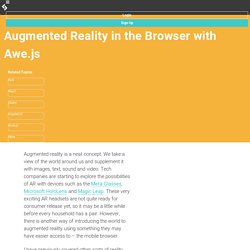 We take a view of the world around us and supplement it with images, text, sound and video. Tech companies are starting to explore the possibilities of AR with devices such as the Meta Glasses, Microsoft HoloLens and Magic Leap. These very exciting AR headsets are not quite ready for consumer release yet, so it may be a little while before every household has a pair. However, there is another way of introducing the world to augmented reality using something they may have easier access to – the mobile browser. I have previously covered other sorts of reality creation and manipulation using JavaScript and Three.js here at SitePoint in my articles on Bringing VR to the Web with Google Cardboard and Three.js and Filtering Reality with JavaScript and Google Cardboard.

What You’ll Need For this demo, you’ll currently need Google Chrome for Mobile. Lastly, you’ll need to print out a marker onto a piece of paper. The code Awe.js. Complexity.zone - Test scene for Head-up Cardboard. Sign Up. Learning Three.js. Rokoko/readme.md at master · jchillerup/rokoko. Oculus Rift - Virtual Reality Headset for 3D Gaming. RAIL GUN by UzBrainnet. About this project Risks and challenges The most critical problem in railgun development was fine-tuning the 360 degrees rotation in the virtual game area. 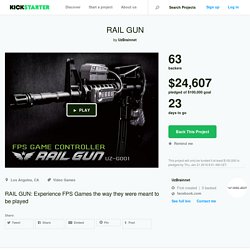 If the user turned the gun 180 degree in real life, they would not be able to see the screen thereby inhibiting their enjoyment of the game. We had to develop a way that the user could turn in virtual space without turning around in reality, all while keeping motions intuitive and natural. This is the main problem that occurs when the game is played without a virtual reality headset (e.g. The goal was to develop a gun controller for truly realistic FPS game-play, and losing the game screen from sight was the biggest obstacle. After this technology was developed, UzBrainnet put it to extensive testing to ensure that all of the motions playing an FPS game felt natural. Sketchbook Pro. Guide to game controllers on Android. We’ve talked a lot about game controllers on the site, and unfortunately the number of articles make it hard to get the big picture at this point. 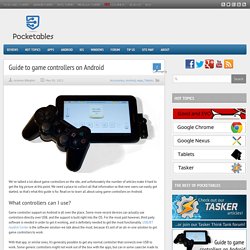 We need a place to collect all that information so that new users can easily get started, so that’s what this guide is for. Read on to learn all about using game controllers on Android. The Best Controller for FPS - A SpaceTec SpaceOrb 360 Controller working with Windows 7 using Arduino and OrbShield. JOYSTICK POUR TÉLÉPHONE A ÉCRAN TACTILE. 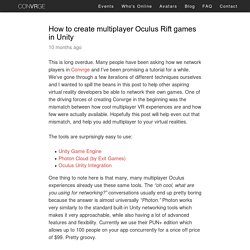 Viewbox, a VR headset by Simon Josefsson. 21 Amazing VR Startups in 5 Minutes! Interviews from TechCrunch Disrupt SF 2015. Virtual Reality Creative Community — Everything you need to start streaming in ‪‎VR‬... Streaming a Raspberry Pi Camera Into VR With JavaScript. I spent the week tinkering with a Raspberry Pi Camera and exploring ways to get it to stream images to a web browser. 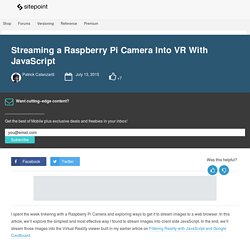 In this article, we’ll explore the simplest and most effective way I found to stream images into client side JavaScript. In the end, we’ll stream those images into the Virtual Reality viewer built in my earlier article on Filtering Reality with JavaScript and Google Cardboard. What You’ll Need For this demo, you’ll currently need a Raspberry Pi (I used the Raspberry Pi 2 Model B) with Raspbian installed (NOOBS has you covered here), an Internet connection for it (I recommend getting a Wi-Fi adaptor so your Pi can be relatively portable) and a Camera module.

If your Pi is brand new and not currently set up, follow the instructions on the Raspberry Pi NOOBS setup page to get your Pi ready to go. If you’ve got a bunch of stuff on your Pi already, please make sure you back everything up as the installation process replaces various files. The Code Attaching Your Pi Camera . Organic Motion RealityCapture LIVE Development Kit (DevKit) Cell Phone Cover Fashion Creative 3d Gun Shape Hard Phone Case Cover For Iphone 5/ 5s Cell Phone Wallet Case From Henyun_technology, $7.86. Ship to:Stock in: 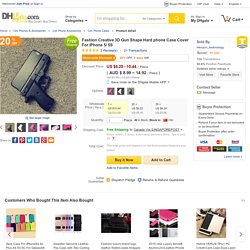 DIY Project – Wearable IMU Tracking Sensor. Project Motivation In this post I present a self-made wearable IMU (inertial measurement unit) tracker which can be used for Virtual Reality applications as well as for any other application which makes use of real-time acceleration data or orientation data. 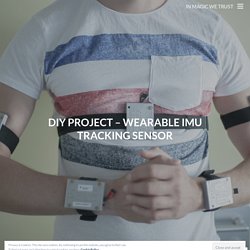 I got inspired by wearables which got on the market a few years ago. There are also companies like xsens selling tracking sensors for Motion Capture applications. However, those sensor are quite costly. And I began thinking “Why not trying to create a cheap version by yourself ?”. It is important to clarify that my tracking sensor does not achieve the performance nor the tracking quality as professional products from companies like xsens. 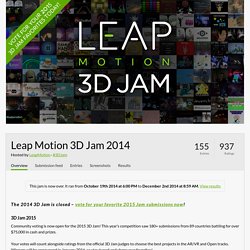 3D Jam 2015 Community voting is now open for the 2015 3D Jam! This year’s competition saw 180+ submissions from 89 countries battling for over $75,000 in cash and prizes. Your votes will count alongside ratings from the official 3D Jam judges to choose the best projects in the AR/VR and Open tracks. Winners will be announced in January 2016, so stay tuned and share your favorites! 3D Jam 2014 After six weeks of heated competition, the first 3D Jam saw 150+ final submissions from developers in more than 40 countries around the globe. Leap Motion 3D Jam 2014. Pixova LitePixova Lite. June 26, 2015 Lorem ipsum dolor sit amet, consectetur adipiscing elit. 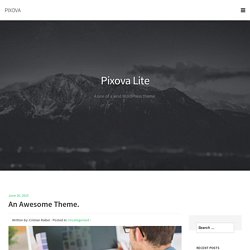 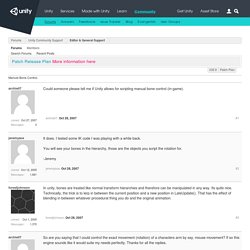 Protect Your Computer From autorun viruses and worms - Make USB Disk more secure. Now-a-days many computer users are facing problems regarding viruses and worms, These worms may be very harmful as well as computer speed consuming too. This is not in the case of internet users only many computers which are not connected to internet have also such viruses and malwares installed in them, Now what is the source of such viruses and woms? Many of you don't know that even the usb drive may have some virus in it which can replicate itself at its own. Yes, I am talking about autorun.inf viruses, Today i am going to discuss ways to make your pc secure from such viruses.

How these autorun.inf worms and viruses propagate? By default, Windows system enables an Auto Play function. How to Remove Shortcut Virus Permanently - Techchore. How To Remove Modern Shortcut Virus in 30 Seconds or Less - Vintaytime. Fernook in a Gundam. Games Inbox: VR arcade revival, Condemned 3 hopes, and Evolve single-player. The evening Inbox tries to solve Nintendo’s third party problem, as one reader seeks advice on getting into Persona. To join in with the discussions yourself email gamecentral@ukmetro.co.uk Next gen arcades So that’s two new coin-op stories in just a few days, eh?

Someone would almost think that arcades are coming back or something. I don’t believe that for a minute of course but it is a shame as there’s nothing like a good custom-made cabinet and controller. I wonder though whether the advent of VR might bring back a kind of arcade renaissance? A VR Arcade? Why It Makes Sense, and Why It Might Not Work. My first exposure to virtual reality came courtesy of an aggressively mediocre Disney movie. He dons the world’s ugliest headset to play a first-person shooter game called Dactyl Nightmare. The game looks awful even by mid-’90s standards, a time capsule of that decade’s failure to commercialize VR, and is mainly there to add tension to the fact that the First Kid is being stalked by a kidnapper, Timothy Busfield in a creepy mustache.

Get lost in The Realm: new details emerge on the design behind the Kickstarter adventure title. The Realm Game by Atomhawk Design+Lantern Interactive. The making of The Thing. The Thing was, and remains, a potentially enthralling, if hazardous, video game license. The movie harnessing a fascinating collection of themes (fear of the unknown, fear of disease and an exploration of man's basic distrust of man) and merging them with a grizzled, yet realistic collection of characters and some suitably nauseating special effects.

And it may well have been a box-office flop, but there's no doubting that John Carpenter's film has one of the best cinematic endings ever: exhausted and emotionally drained, the remaining characters, MacCready and Childs, sit within the burning ruins of their Antarctic research station, almost too shot to care whether the other turns into the eponymous creature or not. BE.VR - Virtual Reality in Belgium (Brussels)