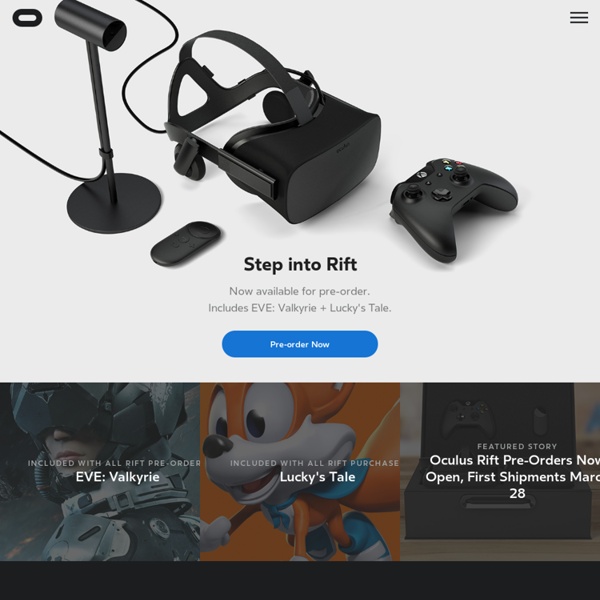 Google Daydream - Wikipedia Daydream is a virtual reality (VR) platform developed by Google.[1] It was announced at Google I/O 2016 and will be released in November 10, 2016.[2] Hardware[edit] An early representation of Google's design of a Daydream-compatible headset RAIL GUN by UzBrainnet About this project Risks and challenges The most critical problem in railgun development was fine-tuning the 360 degrees rotation in the virtual game area. If the user turned the gun 180 degree in real life, they would not be able to see the screen thereby inhibiting their enjoyment of the game. We had to develop a way that the user could turn in virtual space without turning around in reality, all while keeping motions intuitive and natural. This is the main problem that occurs when the game is played without a virtual reality headset (e.g.

Flying Tiger Copenhagen If you want a dose of news and documentaries, NYT VR is your app. Beginning with the 11 minute The Displaced and 5 minute Vigils in Paris, The New York Times promises to post new virtual reality stories "every month or so". A little slow in use but we're sure the bugs will be ironed out. How to create multiplayer Oculus Rift games in Unity How to create multiplayer Oculus Rift games in Unity 10 months ago This is long overdue. Many people have been asking how we network players in Convrge and I’ve been promising a tutorial for a while. We’ve gone through a few iterations of different techniques ourselves and I wanted to spill the beans in this post to help other aspiring virtual reality developers be able to network their own games. STM32F3DISCOVERY ― Kamami.pl - sklep internetowy dla elektroników STM32F3DISCOVERY Zestaw uruchomieniowy z mikrokontrolerem STM32F303VCT6, wbudowany ST-LINK/V2, STM, RoHS The STM32F3DISCOVERY helps you to discover the STM32 F3 series Cortex-M4 mixed-signals features and to develop your applications easily. It includes everything required for beginners and experienced users to get started quickly. Based on the STM32F303VCT6, it includes an ST-LINK/V2 embedded debug tool, accelerometer, gyroscope and e-compass ST MEMs, USB connection, LEDs and pushbuttons. A large number of free ready-to-run application firmware examples are available on www.st.com/stm32f3discovery to support quick evaluation and development. Features:

DIY Project – Wearable IMU Tracking Sensor Project Motivation In this post I present a self-made wearable IMU (inertial measurement unit) tracker which can be used for Virtual Reality applications as well as for any other application which makes use of real-time acceleration data or orientation data. I got inspired by wearables which got on the market a few years ago.

‘Walking aid’ orthopedic device helps adults with locomotive disabilities Designer Luke Forward has refurbished a prototype of his walking aid meant for children suffering from cerebral palsy. The revised model will now help adults in walking rehabilitation. Based on a thorough understanding of orthotics, the device has been made using carbon, thereby making it rather lightweight in composition. Apart from taking design aesthetics into consideration, the redesigned version has folding capabilities, thereby allowing transportation with relative ease.

Leap Motion 3D Jam 2014 The 2014 3D Jam is closed – vote for your favorite 2015 Jam submissions now! 3D Jam 2015 Community voting is now open for the 2015 3D Jam! This year’s competition saw 180+ submissions from 89 countries battling for over $75,000 in cash and prizes. Your votes will count alongside ratings from the official 3D Jam judges to choose the best projects in the AR/VR and Open tracks. Powerchair « Hacking SMA We wanted Alejandro to have a power wheelchair. We wanted him to be able to move through the world by his own volition and it’s clear that the ability to independently explore his environment is important for his cognitive development on multiple levels. We tried going through the typical process of obtaining a power wheelchair but met numerous obstacles: