Grammatical mood. Mood is distinct from grammatical tense or grammatical aspect, although the same word patterns are used for expressing more than one of these meanings at the same time in many languages, including English and most other modern Indo-European languages. 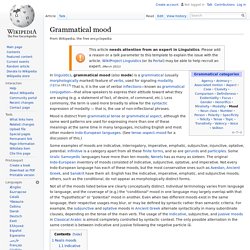 (See tense–aspect–mood for a discussion of this.) Some examples of moods are indicative, interrogatory, imperative, emphatic, subjunctive, injunctive, optative, potential. Infinitive is a category apart from all these finite forms, and so are gerunds and participles. Some Uralic Samoyedic languages have more than ten moods; Nenets has as many as sixteen. Modals and auxiliary verbs in English. Modals and auxiliary verbs in English Modals. 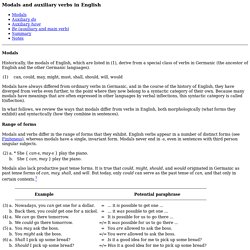 Modal Verbs in English. The main modal (auxiliary) verbs in English are: Will, Shall, May, Might, Can, Could, Must, Ought To, Should, Would, Used To, Need. 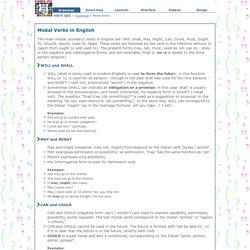 These verbs are followed by the verb in the infinitive without to (apart from ought to and used to). The present forms may, can, must, need do not use do - does in the negative and interrogative forms, and are invariable (that is, no -s is added to the third person singular). WILL and SHALL WILL (shall is rarely used in modern English) is used to form the future; in this function WILL or 'LL is used for all persons - though in the past shall was used for the first persons - and WON'T (=will not, pronounced "wount") in the negative.

Sometimes SHALL can indicate an obligation or a promise; in this case 'shall' is usually stressed in the pronunciation, and never contracted; its negative form is SHAN'T (=shall not). MAY and MIGHT May and might (negative: may not, mightn't)correspond to the Italian verb "posso / potrei". CAN and COULD SHOULD and OUGHT TO. Learn English Modal Verbs. Englishmodal verbs are special verbs that are used to show possibility, ability, permission, and so forth. 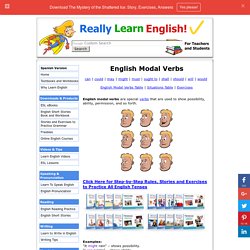 Click Here for Step-by-Step Rules, Stories and Exercises to Practice All English Tenses Examples: "It might rain" – shows possibility. "I can juggle" – shows ability. "You may sit down" – shows permission. The modal verbs are: Learn English Modal Verbs. English modal verbs. The modal verbs of English are a small class of auxiliary verbs used mostly to express modality (properties such as possibility, obligation, etc.). 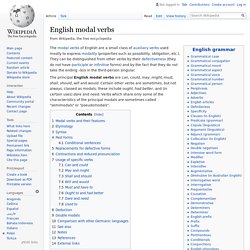 They can be distinguished from other verbs by their defectiveness (they do not have participle or infinitive forms) and by the fact that they do not take the ending -(e)s in the third-person singular. The principal English modal verbs are can, could, may, might, must, shall, should, will and would. Certain other verbs are sometimes, but not always, classed as modals; these include ought, had better, and (in certain uses) dare and need. Verbs which share some but not all of the characteristics of the principal modals are sometimes called "semimodals". Modal verbs and their features[edit] The verbs customarily classed as modals in English have the following properties: They do not inflect, except insofar as some of them come in present–past (present–preterite) pairs. Etymology[edit] Syntax[edit] Past forms[edit] Conditional sentences[edit]

Modal verb. A modal verb (also 'modal','modal auxiliary verb', 'modal auxiliary') is a type of auxiliary verb that is used to indicate modality – that is, likelihood, ability, permission, and obligation.[1] Examples include the English verbs can/could, may/might, must, will/would, and shall/should. 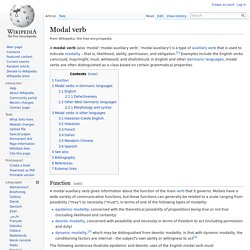 In English and other Germanic languages, modal verbs are often distinguished as a class based on certain grammatical properties. Function[edit] A modal auxiliary verb gives information about the function of the main verb that it governs. Modals have a wide variety of communicative functions, but these functions can generally be related to a scale ranging from possibility ("may") to necessity ("must"), in terms of one of the following types of modality: The following sentences illustrate epistemic and deontic uses of the English modal verb must: epistemic: You must be starving. An ambiguous case is You must speak Spanish. Notes from New Sodom: August 2010. So in writing my speech for the upcoming Plektrum Festival in Tallinn, I've been thinking about AI, how the robots of sf go beyond the clockwork men a la Tik-Tok in the Oz books, Gort in The Day the Earth Stood Still, Robbie the Robot, etc., to become self-aware. 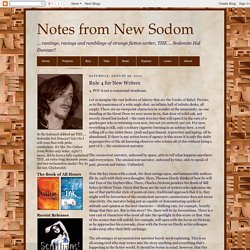 Thinking about how artificial intelligence is really often artificial sentience, how even the ones that are supposed to be beings of pure intellect are actually sneakily emotional. Like, even before his emotion chip, Data exhibits curiosity, an affect; he has to, to function as a character. Anyways, that got me thinking about affect. Been watching Lie To Me too, actually, in which Tim Roth plays a specialist in lie detection whose work turns on the identification of unconscious "micro-expressions," fleeting facial and gestural demonstrations of emotional states at odds with what someone is saying. Six?! Text World Theory and Keats' Poetry: The Cognitive Poetics of Desire, Dreams ... - Marcello Giovanelli - Google หนังสือ. A BRIEF GLOSSARY OF MODALITY.

By Richard Dury adverbs: adverbs can be 'harmonic' (reinforce the modality of the auxiliary), or can modify the modality in a different direction (perhaps we could…). 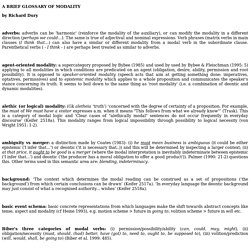 The same is true of adjectival and nominal expressions. Verb phrases (matrix verbs in main clauses (I think that…) can also have a similar or different modality from a modal verb in the subordinate clause. Parenthetical verbs ( - I think - ) are perhaps best treated as similar to adverbs. agent-oriented modality: a supercategory proposed by Bybee (1985) and used by used by Bybee & Fleischman (1995: 5) applying to all modalities in which conditions are predicated on an agent (obligation, desire, ability, permission and root possibility). Alethic (or logical) modality: (Gk aletheia ‘truth’) ‘concerned with the degree of certainty of a proposition. Bleaching: modal auxiliaries can undergo semantic bleaching, e.g. can before private verbs (I can see the ship).

Linguistic modality. In standard formal approaches to modality, an utterance expressing modality can always roughly be paraphrased to fit the following template: (1) According to [a set of rules, wishes, beliefs,...] it is [necessary, possible] that [the main proposition] is the case. 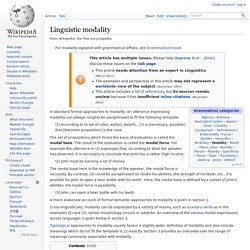 The set of propositions which forms the basis of evaluation is called the modal base. The result of the evaluation is called the modal force. For example the utterance in (2) expresses that, according to what the speaker has observed, it is necessary to conclude that John has a rather high income: (2) John must be earning a lot of money. Epistemic modality. Epistemic modality is a sub-type of linguistic modality that deals with a speaker's evaluation/judgment of, degree of confidence in, or belief of the knowledge upon which a proposition is based. 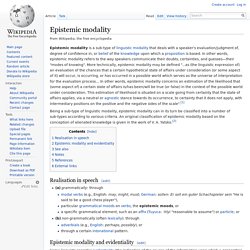 What is deontic modality? What is epistemic modality? Deontic modality. Deontic modality (abbreviated DEO) is a linguistic modality that indicates how the world ought to be,[1] according to certain norms, expectations, speaker desire, etc. In other words, a deontic expression indicates that the state of the world (where 'world' is loosely defined here in terms of the surrounding circumstances) does not meet some standard or ideal, whether that standard be social (such as laws), personal (desires), etc.

The sentence containing the deontic modal generally indicates some action that would change the world so that it becomes closer to the standard or ideal. This category includes the following subcategories:[2] Commissive modality (the speaker's commitment to do something, like a promise or threat):[3] "I shall help you. " Notes from New Sodom: Notes Toward a Theory of Narrative Modality. A One-Sided Conversation “The lemurs must have done it!” “No, Jack, I did not make the lemurs eat your -”“But I don’t give them peyote that often.”

“Stripy is not giving you the evil eye.” “I will not use ritalin on them just because you -”“Well, you could stop aggravating them for a start.” “They wouldn’t be doing that if you hadn’t shot at them.”