World's refugee population hits all-time high of 60mn, half of them children ... The number of displaced persons worldwide is at an all-time high of almost 60 million, half of whom are children, according to a new report from the UN refugee agency. 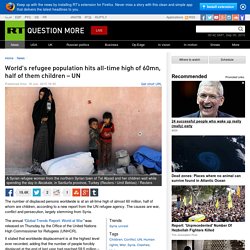 The causes are war, conflict and persecution, largely stemming from Syria. The annual “Global Trends Report: World at War” was released on Thursday by the Office of the United Nations High Commissioner for Refugees (UNHCR). It stated that worldwide displacement is at the highest level ever recorded, adding that the number of people forcibly displaced at the end of last year had reached 59.5 million – compared to 51.2 million a year earlier, and 37.5 million a decade ago.

Fourteen million people were displaced in 2014 alone. According to figures detailed in the report, over half of those refugees are children. The year 2014 also hit a 31-year low for the number of refugees who were able to return to their home countries, at just 126,800. It added that countries housing the majority of refugees are part of the global poor. Global Refugee Crises Reaches an Unprecedented 60 Million. GENEVA, (UNHCR) – Wars, conflict and persecution have forced more people than at any other time since records began to flee their homes and seek refuge and safety elsewhere, according to a new report from the UN refugee agency. 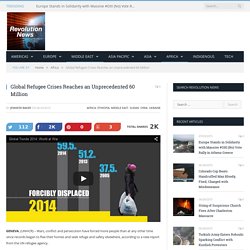 UNHCR’s annual Global Trends Report: World at War, released on Thursday (June 18), said that worldwide displacement was at the highest level ever recorded. It said the number of people forcibly displaced at the end of 2014 had risen to a staggering 59.5 million compared to 51.2 million a year earlier and 37.5 million a decade ago. The increase represents the biggest leap ever seen in a single year. Moreover, the report said the situation was likely to worsen still further. Globally, one in every 122 humans is now either a refugee, internally displaced, or seeking asylum. Since early 2011, the main reason for the acceleration has been the war in Syria, now the world’s single-largest driver of displacement. Europe (up 51%) Middle East and North Africa (up 19%) Noam Chomsky: We’re facing a new Cold War. Earlier this month, Dan Falcone and Saul Isaacson, both high school educators, sat down with Noam Chomsky in his Cambridge, MA office. 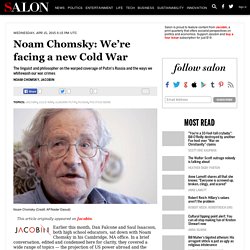 In a brief conversation, edited and condensed here for clarity, they covered a wide range of topics — the projection of US power abroad and the stories told to justify it; COINTELPRO and domestic repression; the failures of the mainstream media; the West’s posture toward Putin; and much more. As always, we’re happy to publish Professor Chomsky’s invaluable insights. I was recently in correspondence with a good friend of yours, Richard Falk, and we were discussing Juan Cole’s idea of “essentialism” as it pertains to the Muslim world. And this led me to think about how essentialism is present in liberal education. For instance, take a good and appropriate cause like education for Muslim girls and how they face Taliban oppression. The Reaganites pretended they didn’t know, but of course they did, so that they could keep pouring funds in. Saul Isaacson. Ukraine/Israel. Mao. Worst Since World War II: 51 Million Refugees World Wide.

Clubbed To Death In Spain; Bombed In Ukraine Refugees arrested by security forces in Spain at Melilla 3rd April 2014. 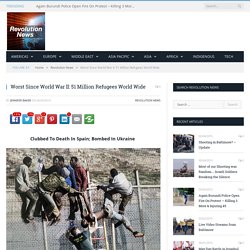 Photo: Jesus Blasco de Avellaneda/Reuters Indifferent people having fun on the beach while a man crawls on a beach in Spain’s Canary Islands after he survived the sea on a makeshift boat, May 5, 2006. Some 38 people made it to the beach on the boat, and 39 were intercepted in another vessel off the coast on their way from Africa to Europe. Photo: Juan Medina/Reuters At least 4 refugees were clubbed to death by Moroccan police after they were chased and captured.

“Moroccan police cruelly clubbed them, stole their personal belongings and took them to Morocco where many were tortured. This video captured what happened at Melilla when 300-400 refugees tried to cross the border fence on June 18th, 2014. These images are the first video proofs confirming that police are murdering refugees on the territory of the European Union. Refugee from Syria in Turkey; photo AFP.

What's urs is ours now. North America. South America. What terrible things are going on in the world, that noone seems to know/care about? Middle East. Map of Human Struggle. Africa.