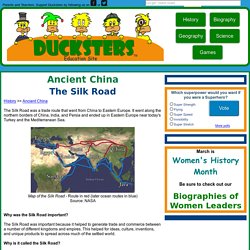 It went along the northern borders of China, India, and Persia and ended up in Eastern Europe near today's Turkey and the Mediterranean Sea. Map of the Silk Road - Route in red (later ocean routes in blue)Source: NASA. Medieval Guilds. Life and Money in Medieval Europe. This website will give you a basic understanding of what life was like for a merchant in medieval times. 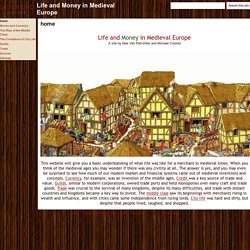 When you think of the medieval ages you may wonder if there was any civility at all. The answer is yes, and you may even be surprised to see how much of our modern market and financial systems came out of medieval inventions and concepts. Currency, for example, was an invention of the middle ages. The Rise of the Middle Class - Life and Money in Medieval Europe. Before delving into the origins of the middle class in Europe during the middle ages it is important to get ones terminology in order. 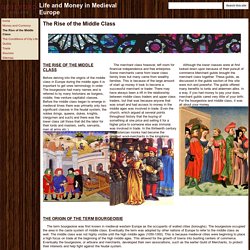 The bourgeoisie had many names and is referred to by many historians as burgess, middle, free venture capitalist classes. Before the middle class began to emerge in medieval times there was primarily only two significant classes in the feudal system, the nobles (kings, queens, dukes, knights, clergymen and such) and there was the lower class (all those that did the labor for their lords and masters, serfs, servants, men at arms etc.).

The merchant class however, left room for financial independence and free enterprise. Some merchants came from lower class family lines but many came from wealthy families. This is because of the large amount of start up money it took to become a successful merchant or trader. European Trade Networks. The Life Story of Marco Polo in Under 3 Minutes. Marco Polo Journeys [IgeoNews] Marco Polo's Travels & Routes. The Middle Ages for Kids and Teachers - Middle Ages for Kids. Europa en los siglos XII y XIII. Medieval city life - Medieval Madness.