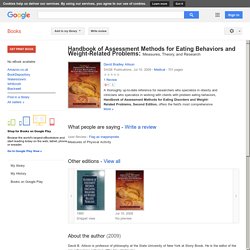 In addition to obesity (an issue that has reached epidemic proportions in the United States), the Handbook deals with problem eating behaviors, eating disorders, and the associated psychological issues that underlie these problems. Blechert et al 2010 to eat or not to eat corrected. The measurement of dietary restraint, disinhibition and hunger: an examination of the factor structure of the Three Factor Eating Questionnaire (TFEQ) Results Summaries of the obtained factors and the subscales derived from them, are shown in Table 1. 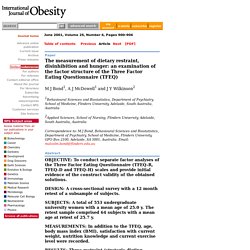 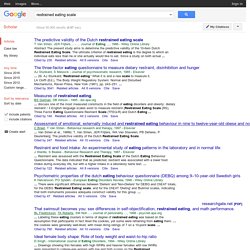 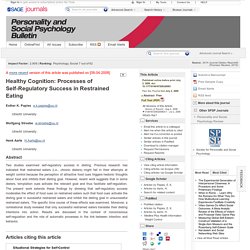 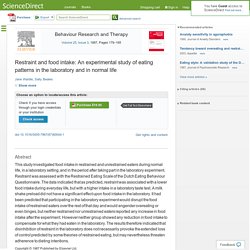 Assessment of emotional, externally induced and restrained eating behaviour in nine to twelve-year-old obese and non-obese children. Shorter communication a Department of Developmental and Personality Psychology, University of Gent, H. 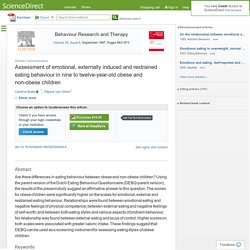 Dunantlaan 2, 9000 Gent, Belgiumb Department of Clinical Psychology, University of Nijmegen, Nijmegen, The Netherlands. The predictive validity of the Dutch Restrained Eating Scale - van Strien - 2006 - International Journal of Eating Disorders. Restraint theory study: Herman and Mack. Method: 45 female students used in the study all told that it was a study on taste experiences15 PPs in each of the 3 conditionsfirst group received no preloadsecond group were given a milkshake as a preloadthird group were given 2 milkshakes as a preloadall PPs were then given 3 tubs of ice cream and told they could eat as much of it as they wantedall PPs were given a questionnaire to assess their degree of dietary restraint results: for all the groups PPs were divided into either dieters or non dieters sub-groupsthey found that non dieters ate less of the ice cream in the 2 milkshake preload condition that in the one or zero preload conditionsdieters ate significantly more ice cream in the one and two preload conditions than in the zero preload condition About these ads Share this: Like this: Related. 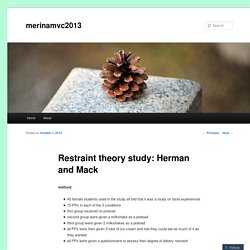 Psychology restraint theory. 4) Explanations for the success or failure of dieting. Restraint theory Klesges et al found that 89% of the female population restrain their food intake at some point in their lives. 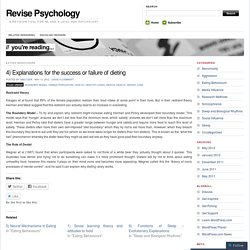 But in their restraint theory Herman and Mack suggest that this restraint can actually lead to an increase in overeating. The Boundary Model – To try and explain why restraint might increase eating Herman and Polivy developed their boundary model. This model says that ‘hunger’ ensures we don’t eat less than the minimum level, whilst ‘satiety’ ensures we don’t eat more than the maximum level. PsycNET - Display Record. Weight, restraint, cognitions and counterregulation. Rutgers—The State University USA Received 12 June 1979, Available online 30 May 2002 Choose an option to locate/access this article: Check if you have access through your login credentials or your institution. 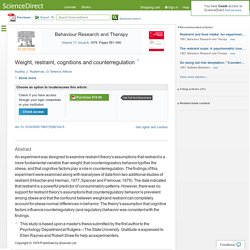 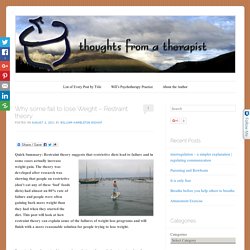 The theory was developed after research was showing that people on restrictive (don’t eat any of these ‘bad’ foods diets) had almost an 80% rate of failure and people were often gaining back more weight than they had when they started the diet. This post will look at how restraint theory can explain some of the failures of weight loss programs and will finish with a more reasonable solution for people trying to lose weight. Restraint theory has gained increased popularity and as such there is quite a lot of research out there as to its affect on weight loss.

From the research that I read (not all of it) it does not appear that the scientific community has isolated why some people can restrain themselves while others cannot. What is the solution? Fast and dramatic weight loss is an unrealistic goal for the majority of the population. Confluence Balance. Explanations for the success or failure of dieting lpr.

Restraint Theory & Boundary Model - Failure of Diets - Document in A Level and IB Psychology. Restraint Theory ­ (Herman & Mack) This model suggests that restraining our food intake actually increases the risk of overeating, which is why many diets fail and some people even end up putting more weight on. The restrain theory has become synonymous with dieting and suggests that attempting to eat less might be a better predictor of food intake than weigh per se. The restrain theory also argues that restrained eating can lead to both under and overeating.Related research (Mann et al, 2007) Laboratory studies have shown that restrained eaters often overeat after high calorie preloads. Reviews of controlled studies dieting in the real world similarly conclude that reducing calorie input through dieting is not an effective method of losing weight (Wardle & Beadle) Carried out a dietary experiment under laboratory conditions and found that dieters ate more than those in exercise and control groups, concluding that overeating by dieters is caused by the diet itself.

Dietary restraint theory. Evaluate the success of dietary restraint theory in explaining the success or failure of weight control During past few decades psychologists have been trying to explain dietary patterns in individuals which are being controlled with a purpose of weight management, even in a healthy body shape. The main theories that have been developed throughout these years are psychosomatic (emotional eating), externality (externally induced eating cues) and restraint. The last one can be well explained by Tuschl (1990), who suggested that restrain eaters are those who curb themselves from food intake to either lose weight or maintain it at the low, but constant level. Restraint theory was initially developed by Herman and Mack (1975) who stated that people's eating behaviour is affected by physiological (pressure to eat) and non physiological factors (self imposed restraint to these pressures- Herman and Polivy 1985, pp.192).

We can help you to write your essay! Restraint theory and its implications for obesity treatment - Ogden - 2009 - Clinical Psychology & Psychotherapy. Eating behaviour, personality traits and body mass. Union Catalogue of Agricultural Libraries in the Netherlands The Wageningen UR Library Catalogue contains bibliographic data on books and periodicals held by the libraries of Wageningen University and Research Centre and some 15 associated libraries. Holding data are added to each record. Subjects covered include Agrotechnology, Food and Food Production, Plant and Animal Sciences, Soil Science, Geo-information, Landscape and Spatial Planning, Water and Climate, Ecosystem Studies, Economics and Society.

The joint collections of the participating libraries cover a substantial part of the internationally available scientific literature in these disciplines. As far as Dutch scientific literature in these fields is concerned, coverage can be considered near 100%, including much of the so-called "grey literature". Avoidance coping, binge eating, and depression: An examination of the escape theory of binge eating - Paxton - 1998 - International Journal of Eating Disorders. The Effect of Pre-exposure to Food Cues on the Eating Behavior of Restrained and Unrestrained Eaters. Regular Article Department of Psychology, University of Toronto Received 5 September 1995, Available online 22 April 2002 Choose an option to locate/access this article: Check if you have access through your login credentials or your institution.

He has provided expert commentary on CNN Health and National Public Radio. Beat Overeating Now!: Take Control of Your Hunger Hormones to Lose Weight Fast - Scott Isaacs. Stress,%20eating%20and%20the%20reward%20system. “Eating addiction”, rather than “food addiction”, better captures addictive-like eating behavior. <div class="msgBox" style="margin-top:10px;"><span class="errMsg"><div>JavaScript is disabled on your browser. Please enable JavaScript to use all the features on this page. This page uses JavaScript to progressively load the article content as a user scrolls.

If you did it in one sitting, you may suffer from Binge Eating Disorder, a newly-sanctioned psychiatric diagnosis in the Diagnostic and Statistical Manual-V by the American Psychiatric Association. But even if you ate the box over several sittings, you might still suffer from its more controversial cousin—Food Addiction, not yet included in the DSM-V. There’s been a lot of heat about food addiction, but little light. None other than Nora Volkow, director of the National Institute of Drug Abuse, has spoken out in favor of the diagnosis. Yet the psychiatric and the scientific communities have been slow to get on the bandwagon. Some scientists poo-poo the idea on basic principle. The Extraordinary Science of Addictive Junk Food. Replace 'food addiction' with 'eating addiction', say scientists. Thursday September 11 2014 Eating stimulates reward pathways in the brain “Food is not addictive ... but eating is: Gorging is psychological compulsion, say experts,” the Mail Online reports.

Food Addicts Anonymous. Food addiction manifests itself in the uncontrollable craving for excess food that follows the ingestion of refined carbohydrates, primarily sugar and flour substances that are quickly metabolized and turned into sugar in the bloodstream. Due to those uncontrollable cravings, a food addict's quality of life deteriorates when he or she eats sugar, flour or wheat. It can deteriorate physically, emotionally, socially and/or spiritually. If any of the following symptoms are familiar to you, you may be a food addict: Authoritynutrition. Food Addiction Signs and Treatments. Associative Learning and Conditioning Theory: Human and Non-Human Applications. Although many professionals in psychology (including the sub-disciplines of human learning and memory, clinical practice related to psychopathology, neuroscience, educational psychology and many other areas) no longer receive training in learning and conditioning, the influence of this field remains strong.

Therefore, many researchers and clinicians have little knowledge about basic learning theory and its current applications beyond their own specific research topic. The primary purpose of the present volume is to highlight ways in which basic learning principles, methodology, and phenomena underpin, and indeed guide, contemporary translational research. Food, Diet and Obesity. The global obesity epidemic is arguably the most serious health issue facing the food industry today. The specificity of restrained versus unrestrained eaters' responses to food cues: general desire to eat, or craving for the cued food? Chocolate in Health and Nutrition. Hedonic Eating: How the Pleasure of Food Affects Our Brains and Behavior - Dr Nicole Avena. Managing and Preventing Obesity: Behavioural Factors and Dietary Interventions. Ouwehand%20Papies%20Appetite%202010. Obesity Prevention: The Role of Brain and Society on Individual Behavior - Laurette Dube. Google. Wake up and smell the cookies. Effects of olfactory food-cue exposure in restrained and unrestrained eaters.

Perception of calories and regulation of intake in restrained and unrestrained subjects. Dietary restraint and responsiveness to sensory-based food cues as measured by cephalic phase salivation and sensory specific satiety. Memory for recent eating and its influence on subsequent food intake. Breakdown of dietary restraint following mere exposure to food stimuli: Interrelationships between restraint, hunger, salivation, and food intake. PsycNET - Display Record. Cephalic phase responses, craving and food intake in normal subjects. Overweight children overeat after exposure to food cues. The specificity of restrained versus unrestrained eaters' responses to food cues: general desire to eat, or craving for the cued food? Exposure to food cues on the eating behaviour of restrained and unrestrained eaters. Eating Behaviour in Response to Olfactory Food Cues: The Role of Dietary ...