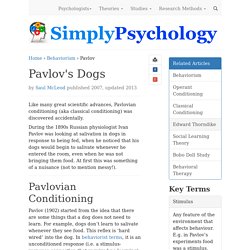 During the 1890s Russian physiologist Ivan Pavlov was looking at salivation in dogs in response to being fed, when he noticed that his dogs would begin to salivate whenever he entered the room, even when he was not bringing them food. At first this was something of a nuisance (not to mention messy!). Pavlovian Conditioning Pavlov (1902) started from the idea that there are some things that a dog does not need to learn. Unconditioned Stimulus (Food) > Unconditioned Response (Salivate) Pavlov showed the existence of the unconditioned response by presenting a dog with a bowl of food and the measuring its salivary secretions (see image below).

Pavlov knew that somehow, the dogs in his lab had learned to associate food with his lab assistant. In behaviorist terms, the lab assistant was originally a neutral stimulus. Summary. Nuerobiology. Movement learning.

Friendship. Language. Will Work For Cupcakes Accountant. Psychological/ Interpersonal. The Stanford Prison Experiment: A Simulation Study of the Psychology of Imprisonment. The Secrets Behind Psychology’s Most Famous Experiment. Social learning theory. 10 Most Brilliant Social Experiments. Ten of the most influential social psychology experiments. 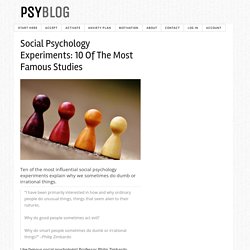 “I have been primarily interested in how and why ordinary people do unusual things, things that seem alien to their natures.Why do good people sometimes act evil? Why do smart people sometimes do dumb or irrational things?” –Philip Zimbardo Like eminent social psychologist Professor Philip Zimbardo (author of The Lucifer Effect: Understanding How Good People Turn Evil), I’m also obsessed with why we do dumb or irrational things. The answer quite often is because of other people – something social psychologists have comprehensively shown. Over the past few months I’ve been describing 10 of the most influential social psychology experiments.

Each one tells a unique, insightful story relevant to all our lives, every day. 1. The ‘halo effect’ is a classic social psychology experiment. » Read on about the halo effect -» 2. » Read on about cognitive dissonance -» 3. 10 Famous Psychological Experiments That Could Never Happen Today. Here are the stories behind the nicknames of the NFL’s 32 teams—and what they were almost called.

All photos via Getty Images. Getty Images The franchise began play in Chicago in 1898 before moving to St. Louis in 1960 and Arizona in 1988. Team owner Chris O’Brien purchased used and faded maroon jerseys from the University of Chicago in 1901 and dubbed the color of his squad’s new outfits “cardinal red.” Shortly after insurance executive Rankin Smith brought professional football to Atlanta, a local radio station sponsored a contest to name the team.

Ravens, a reference to Edgar Allan Poe’s famous poem, beat out Americans and Marauders in a contest conducted by the Baltimore Sun. 25 Mind Blowing Psychology Experiments...You Won't Believe What's Inside Your Head. Bandura and Rotter's Perspectives - The Social Cognitive Perspective. 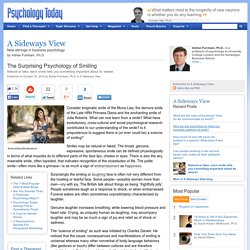 What can one learn from a smile? What have evolutionary, cross-cultural and social psychological research contributed to our understanding of the smile? Is it preposterous to suggest there is (or ever could be) a science of smiling? Smiles may be natural or faked. Surprisingly the smiling or laughing face is often not very different from the howling or tearful face. Genuine laughter increases breathing, while lowering blood pressure and heart rate. The “science of smiling” as such was initiated by Charles Darwin.

Darwin also observed that smiling and laughter often occurred together and therefore had similar origins. However there maybe culture differences in rules of smiling: when etiquette dictates it is appropriate to smile or not. We know that, on average, women smile more than men. Smiling in humans can indicate dominance. All kinds of minds. Planetary Glass Set. 7 Awesome Apps for Special Needs.