English 88 American Poery. More recent versions of this syllabus can be found as English 288 (modernist) English 288 (postwar) Englsih 262 (contemporary) where the period has been split in three. 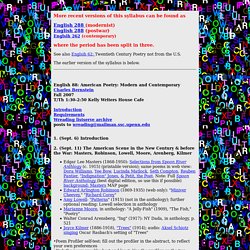 The decades between roughly 1890 and 1960 witnessed unprecedented efforts to create new art, new values, and a new culture in Europe and the United States to distance itself from the more socially acceptable works of late Victorian poets and artists. 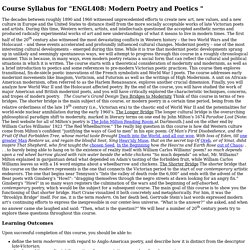 During this time, Western writers, artists, and intellectuals questioned the accepted aesthetic norms and produced radically experimental works of art and new understandings of what it means to live in modern times. The first half of the 20th century also witnessed the most devastating conflicts in Western history – the two World Wars and the Holocaust – and these events accelerated and profoundly influenced cultural changes. 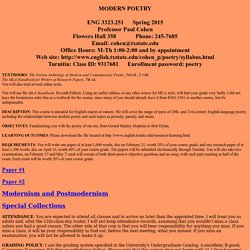 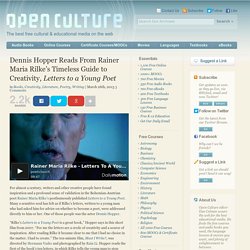 Many a sensitive soul has felt as if Rilke’s letters, written to a young man who had asked him for advice on whether to become a poet, were addressed directly to him or her. One of those people was the actor Dennis Hopper. “Rilke’s Letters to a Young Poet is a great book,” Hopper says in this short film from 2007. “For me the letters are a credo of creativity and a source of inspiration. After reading Rilke it became clear to me that I had no choice in the matter. Video: "Lady Lazarus" and the Received Form. From the inaugural Poets Forum, presented by the Academy of American Poets on October 20, 2007, at Marymount College in New York City. 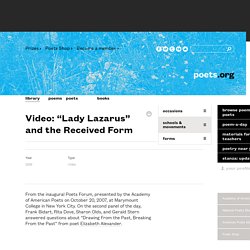 How to Read a Poem. Reproduced in partnership with the Great Books Foundation. 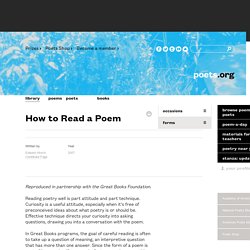 Reading poetry well is part attitude and part technique. Curiosity is a useful attitude, especially when it’s free of preconceived ideas about what poetry is or should be. Effective technique directs your curiosity into asking questions, drawing you into a conversation with the poem. In Great Books programs, the goal of careful reading is often to take up a question of meaning, an interpretive question that has more than one answer. Friends - Joeys adoption letter for Chandler and Monica. Word Choice - Friends - Adoption Letter.mov. ‘Patchwriting’ is more common than plagiarism, just as dishonest. The Columbia Spectator writer fired for plagiarizing from The New York Times earlier this month was actually employing a dishonest writing technique that is common on college campuses and among journalists. 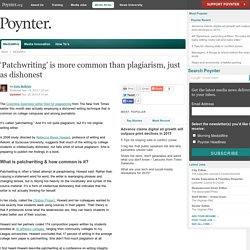 It’s called “patchwriting.” And it’s not quite plagiarism, but it’s not original writing either. A 2008 study directed by Rebecca Moore Howard, professor of writing and rhetoric at Syracuse University, suggests that much of the writing by college students is intellectually dishonest, but falls short of actual plagiarism. She is preparing to publish her findings in a book. What is patchwriting & how common is it? Patchwriting is often a failed attempt at paraphrasing, Howard said. In her study, called the Citation Project, Howard and her colleagues wanted to see exactly how students were using sources in their papers.

Howard and her partners coded 174 composition papers written by students enrolled at 16 different colleges, ranging from community colleges to Ivy League universities. Engfish. It looks like English but stinks like a fish…it must be Engfish. When I teach expository writing, there’s a window in the semester – usually starting around week 7 or so, where it fits most organically – during which I have students read and react to a few essays that discuss good writing – and especially good academic writing – from a slightly different perspective: is it clear and readable, or it just a bunch of pretentious nonsense? 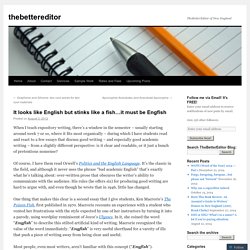 Of course, I have them read Orwell’s Politics and the English Language. It’s the classic in the field, and although it never uses the phrase “bad academic English” that’s exactly what he’s talking about: over-written prose that obscures the writer’s ability to communicate with the audience. His rules (he offers six) for producing good writing are hard to argue with, and even though he wrote that in 1946, little has changed. One thing that makes this clear is a second essay that I give students, Ken Macrorie’s The Poison Fish, first published in 1970. What is Engfish, exactly? 10 of the Greatest Essays on Writing Ever Written. If there’s one topic that writers can be counted on to tackle at least once in their working lives, it’s writing itself. 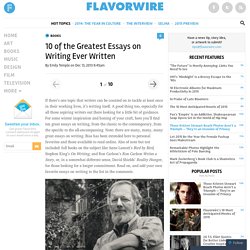 A good thing too, especially for all those aspiring writers out there looking for a little bit of guidance. For some winter inspiration and honing of your craft, here you’ll find ten great essays on writing, from the classic to the contemporary, from the specific to the all-encompassing. Note: there are many, many, many great essays on writing. Bias has been extended here to personal favorites and those available to read online. Also of note but not included: full books on the subject like Anne Lamott’s Bird by Bird, Stephen King’s On Writing, and Ron Carlson’s Ron Carlson Writes a Story, or, in a somewhat different sense, David Shields’ Reality Hunger, for those looking for a longer commitment. David Foster Wallace: The future of fiction in the information age.

Kurt Vonnegut on the Shapes of Stories. Tradition and the Individual Talent by T. S. Eliot. Introduction Often hailed as the successor to poet-critics such as John Dryden, Samuel Taylor Coleridge, and Matthew Arnold, T.S. 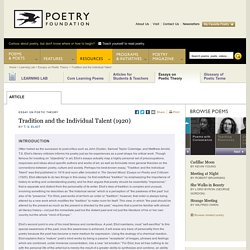 Documentary Film Lesson Plans for High School and Middle School - Rock Your World. Media has the power to inform us about issues, inspire us to learn more and incite us to take action. In this series of lessons, students learn about the power of film to rock their worlds as they write, film, and edit their own documentaries. Initially, students are immersed in viewing numerous examples of short documentary style films. From these, they develop an understanding of the genre of documentary films and learn how informative and persuasive messages are crafted in film. Next, individual students develop their own film concept and collaborate with group members to choose one of those concepts from which the team collaboratively writes, storyboards, films, and edits their own short film.

6 life hacks from my favorite TED talks. This week I’ve been revisiting a few of my favorite TED Talks. TED–which stands for technology, entertainment and design–is a non-profit that sponsors conferences around the world focused on “ideas worth sharing.” They recently celebrated one billion TEDTalk views and have partnered with Mashable to create TopTED, which features the favorite talks of celebrities, visionaries and innovators. Sasha Dichter: The Generosity Experiment. Loading … Comment on this Talk 126 total comments In this inspiring talk at the NextGen:Charity conference, Sasha Dichter of the Acumen Fund shares the results of his month-long "Generosity Experiment" where he said "yes" to every request for help.

Sam Richards: A radical experiment in empathy. Letters To A Young Poet - R. M. Rilke. Letters To A Young Poetby Rainer Maria Rilke This book has been my favorite book for ten years or more. I've bought and then given away so many copies of it, I almost never have one for myself. So I digitized it for all those times when I'm without my own copy. The translation is by Stephen Mitchell and is, by far, the best of all the ones I've read.

Essays by Dana Gioia. Can Poetry Matter? - 91.05. The proliferation of new poetry and poetry programs is astounding by any historical measure. Just under a thousand new collections of verse are published each year, in addition to a myriad of new poems printed in magazines both small and large. No one knows how many poetry readings take place each year, but surely the total must run into the tens of thousands. And there are now about 200 graduate creative-writing programs in the United States, and more than a thousand undergraduate ones. With an average of ten poetry students in each graduate section, these programs alone will produce about 20,000 accredited professional poets over the next decade. From such statistics an observer might easily conclude that we live in the golden age of American poetry. Adrienne Rich on the importance of poetry.

In "The Defence of Poetry" 1821, Shelley claimed that "poets are the unacknowledged legislators of the world". Mark Strand on Poetry and Poetics. Cracks in the Oracle Bone: Teaching Certain Contemporary Poems by Brenda Hillman. Poetry%20Writing%20Syllabus. A year offline, what I have learned: Paul Miller at TEDxEutropolis. 11 must-see TED Talks. Inspiring Portrait Project Breaks Down Stereotypes; Shows Raw Beauty Of Disabled Women. Watch "The Most Important Lesson from 83,000 Brain Scans: Daniel Amen at TEDxOrangeCoast" Video at TEDxTalks.

Jacaranda Press: Writing Exercises. Exercises to Unlock the Poet Within. Albany Poetry Workshop Writing Exercise: Imagery and the Five Senses. Instructions. Finding A Jury Of Your Peers Actually Is Pretty Complicated. And Professor Loses Job. Home. Youtube. 100 Apps for Teachers. How to create and narrate a Prezi. Cameron Russell: Looks aren't everything. Believe me, I'm a model. Joshua Foer: Feats of memory anyone can do. How to know your life purpose in 5 minutes. How to learn anything. Popplet. Adding Photos to your Podcast in Garage Band. Tool Kit for Rhetorical Analysis - Definitions and Examples of Figures of Speech.