Black Lives Matter: What is systemic racism? Kids’ questions answered. News BBC News Navigation Sections Previous Next Media player Media playback is unsupported on your device What an we do to make a difference? 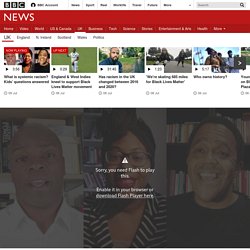 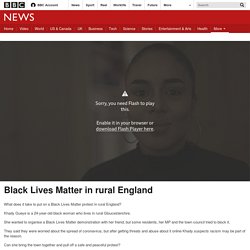 Khady Gueye is a 24-year-old black woman who lives in rural Gloucestershire. She wanted to organise a Black Lives Matter demonstration with her friend, but some residents, her MP and the town council tried to block it. They said they were worried about the spread of coronavirus, but after getting threats and abuse about it online Khady suspects racism may be part of the reason. Can she bring the town together and pull off a safe and peaceful protest? You can watch the full documentary, Black Lives Matter: My Fight to Protest, on iPlayer. Video journalist: Woody Morris Follow Newsbeat on Instagram, Facebook, Twitter and YouTube. Listen to Newsbeat live at 12:45 and 17:45 weekdays - or listen back here. 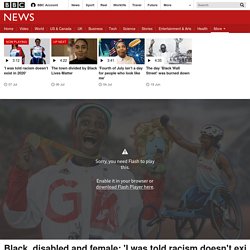 " Sprinter and cyclist Kadeena Cox says she's experienced racism "in some form my entire life". Along with Great Britain team-mate Kare Adenegan, she's in what she describes as "a small niche" as a group of professional athletes dealing with a range of prejudices to get to the top of their career. The duo have been speaking to BBC Newsbeat's Katie Smith about their time in elite sport. Video edited by Jimmy Blake Follow Newsbeat on Instagram, Facebook, Twitter and YouTube. Listen to Newsbeat live at 12:45 and 17:45 weekdays - or listen back here 07 Jul 2020. Has racism in the UK changed between 2016 and 2020? News BBC News Navigation Sections Previous Next Media player Media playback is unsupported on your device In 2016 Nesta McGregor investigated what's behind the Black Lives Matter protests across Britain. 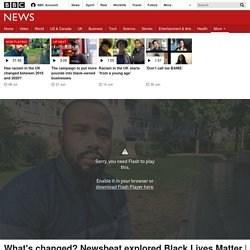 Video What's changed? Nesta McGregor investigated what was behind the Black Lives Matter protests that took place across Britain in 2016, asking why some black people in the UK still felt racism affected them every day. In this documentary, made four years ago, Nesta travels the country speaking to young black people and draws on his own personal experiences of growing up in the UK.

He meets Benathi who helped organise some of the marches - she feels she has been discriminated against, in the past, at work because of her afro hair-style and Jen, a law graduate, who thinks it takes a while to sink in that people may treat you differently because you're black. This film was first broadcast in October 2016.

Follow Newsbeat on Instagram, Facebook, Twitter and YouTube. 08 Jul 2020. Manchester’s Black Champion. Manchester’s relationship with the slave trade is a matter of historic record, but its streets are not as littered with the names of its culprits in the way that cities such as Bristol, Glasgow, Liverpool and London are. 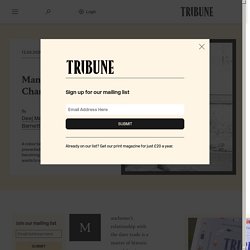 Streets named after large slave-owning families such as the Hibberts and the Beresfords exist, while a heated debate ensues over the future of the statue of Sir Robert Peel in city centre. But the city’s ‘enlightened’ Liberal rulers focused on celebrating upper-class Radicals like Oliver Heywood, who betrayed his pro-slavery father to champion the abolitionist cause. Close to Heywood’s statue on Albert Square is Lincoln Square, where a monument to the eponymous US president stands. Engraved on the side is his letter saluting the “workmen of Manchester” for their open support of anti-slavery forces in the American Civil War – and in defiance of their mainly pro-Confederate employers. But the city has few public monuments dedicated to its historic, large black community.