Text of talk by Vatican Observatory director on ‘Science Does Not Need God. Or Does It? A Catholic Scientist Looks at Evolution’ - U.s. 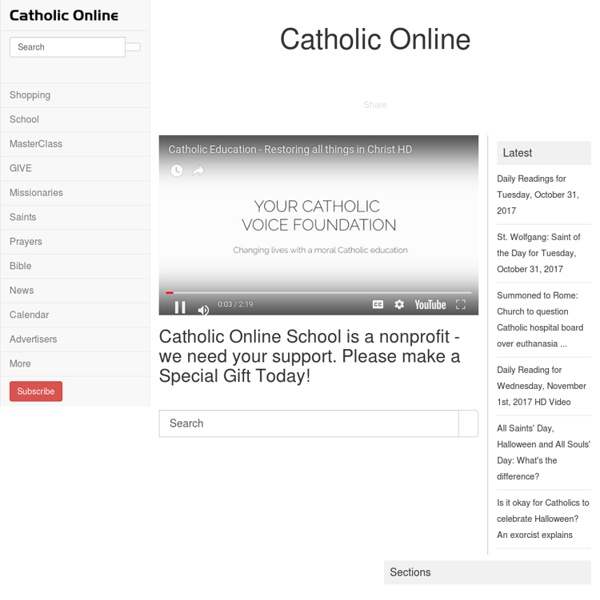 Papal Prophecies Papal Prophecies - The End of Religion Saint Malachy (1094 - November 2, 1148) was known as great prophet. While in Rome in 1139 he received a vision showing him all the Popes from his day to the end of time. According to these prophecies, only two Popes remaining after John Paul II. St. Malachy was reported to have possessed the powers of levitation, healing, and clairvoyance.

Laudate for Android Download Laudate for Android devices click here ( Laudate for Amazon Kindle Fire click here ( How-to guides import prayers Prayer to St. Thomas More This prayer invokes St. Thomas More as the patron saint of lawyers, asking him to pray to God for the grace to rise to the highest standards of that profession. It also makes reference, in the final verse, to St. Thomas More’s status as the patron saint of large families, and it would be appropriate for a non-lawyer to pray that verse as a separate prayer. The Updated Training Wisdom of John Kellogg For most readers on Letsrun, John Kellogg needs no introduction. But I hope you won't chide me too much for giving the man his proper dues. John Kellogg is an enigmatic, immensely intelligent personality who is something of a legend in internet circles. He is best known for coaching Weldon and Robert Johnson, the twin brothers who founded this website. Weldon Johnson was a 4:28 miler in high school and a 30:14 10k runner in college whom Kellogg coached to a 28:06 10k and two 4th-place finishes at the US Championships.

Great Philosophers: Augustine On Evil From the Enchiridion, by Augustine All of nature, therefore, is good, since the Creator of all nature is supremely good. But nature is not supremely and immutably good as is the Creator of it. Purgatorial Society The names listed below have been enrolled in the About.com Catholicism Purgatorial Society. When you attend Mass or pray for the dead, please remember these faithful departed. (Simply offer the prayers or Mass "for those enrolled in the About.com Catholicism Purgatorial Society.") Joe Rubio - Middle Distance Outline Guide Joe was gracious enough to let me put up his Middle Distance Guide. Many thanks Joe! The document can be downloaded in it's entirety at: Rubio Middle Distance Guide.rtf For those of you who don't know about Joe you can get a full-length summary of his accomplishments and skills at: Venue Sports. Briefly, he ran in the OT Trials in '92 and '96 placing as high as 26th.

Luther Meets His Match: Part VI: Erasmus' Hyperaspistes (1526): Sola Scriptura & Perspicuity (Total Clarity) of Scripture Critiqued I myself prefer to have this cast of mind than that which I see characterizes certain others, so that they are uncontrollably attached to an opinion and cannot tolerate anything that disagrees with it, but twist whatever they read in Scripture to support their view once they have embraced it. (p. 120; citing his earlier Discussion, or Diatribe) I do not condemn those who teach the people that free will exists, striving together with the assistance of grace, but rather those who discuss before the ignorant mob difficulties which would hardly be suitable in the universities. . . . to discuss those difficulties of the scholastics about notions, about reality and relations, before a mixed crowd, you should consider how much good it would do. (p. 123) And then, as for what you say about the clarity of Scripture, would that it were absolutely true! But those who laboured mightily to explain it for many centuries in the past were of quite another opinion.

Running Times Magazine There's a story told about Arthur Lydiard and his golden boys at the '64 Olympics in Tokyo. Down at the training track, with their rivals looking on, they ran an impressive interval session of 20 quarters. The next day one of these opponents, a talented interval-trained Canadian in his first Olympics, showed up at the track with his coach and proceeded to run the same session. Lydiard's boys cheered him on as he ran each interval faster than the last.

St. Louis de Montfort's Way of Total Consecration to Jesus through Mary Background: Always a pious child and especially devoted to prayer before the Blessed Sacrament, when the brilliant St. Louis de Montfort (A.D. 31 January 1673 - 28 April 1716) reached the age of 19, he gave away all he had and resolved to live on alms. He was ordained a priest in Paris, worked for some time as a hospital chaplain, but then came to devote his time to preaching -- a task he was extremely gifted at. He went on to found the Daughters of Wisdom -- an Order devoted to hospital work and educating poor girls -- and the Company of Mary (the Montfort Fathers), a missionary group of priests. It was his devotion to Mary, though, for which he is most remembered.

2 kinds of runners. Which are you? I have no desire for this to become a thread on HRMs. There's a lot more I want to discuss. But let me write to counter some stuff I’ve read over the years against HRMs.