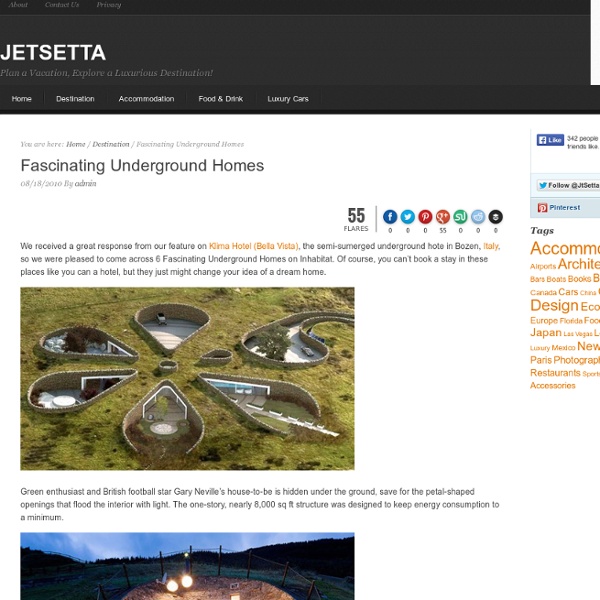 50 Most Strange and Unusual Buildings arround the World The world is full of beautiful strange and fantastic buildings that are the examples of amazing architecture. Architecture Photography brings this beauty to the world, and for this reason, architectural photography is as thrilling as it is heartwarming. In this roundup, we have compiled an amazing collection of some bizarre yet interesting buildings that are reflected through architectural photography.

Guadix-The Home Of The Cave Dwellers by Andalucia Travel Guide Located in the eastern corner of the Granada Province of Andalucia on the left bank of the river Guadix is the City of Guadix, The city has a population of around 20,000 live in this Andalucian city which occupies part of an elevated plateau nestled amongst the northern foothills of the Sierra Nevada mountain range. It is surrounded by anciant walls and you can still see the ruins of the old Moorish castle that stood here. There is a Cathedral in the city built in the 18th century on the site of a mosque which is well worth a visit although it does not have the same architectural merit of some of Andalucia´s more famous Cathedrals.

Mystical, Magical & Magnificent Monasteries in Meteora (20 Pics) The caves in Meteora, Greece, had inhabitants for fifty millennia, but due to raids, “hermit monks” moved to the safety of sandstone rock pinnacles in the 9th century and began building monasteries. More monks and nuns came, building more monasteries perched high upon the cliffs. Wikipedia reports, “Access to the monasteries was originally (and deliberately) difficult, requiring either long ladders lashed together or large nets used to haul up both goods and people. This required quite a leap of faith — the ropes were replaced, so the story goes, only ‘when the Lord let them break.’” UNESCO World Heritage says, “The net in which intrepid pilgrims were hoisted up vertically alongside the 1,224 ft. cliff where the Varlaam monastery dominates the valley symbolizes the fragility of a traditional way of life that is threatened with extinction.” Photo #1 by Vaggelis Vlahos

Its a Mouse... Its a Deer... Its a Mouse Deer! A tiny deer at Paignton Zoo has given birth just months after she lay critically ill on the operating table. A long and complicated illness required the tiny lesser Malay mouse deer to undergo multiple rounds of general anaesthesia and surgery. Due to the hard work of zoo vets and a little luck, the tiny deer overcame it's illness and on June 19th gave birth to an even tinier little fawn. Mouse deer are the smallest members of the animal family that includes pigs, hippos, camels, deer, antelopes, sheep and goats. Adults are 45 to 55 centimetres long (18 to 22 inches) and can live for about 12 years.

40 Real Band Names Before They Were Famous There are a lot of garage bands that hope they will success sometimes in future and make best selling single across America. Only Few from thousand success in what they want. Back in time for Garage play, bands change a lot names. Bellow you can find First names from bands who i guess didn’t think they will success, and they get some funny and strange band names.

50 Strange Buildings of the World This is the original list of 50 strange buildings which has been and is being copied (stolen) by many bloggers. If you wish to post it on your blog or website, feel free to use up to 20 buildings from this list and give a proper link to our website ( as the source article. Ok, now enjoy this weird, odd, bizarre and incredible looking arcitechture! Club Tropicana Fourni par Traduction AGM is being held on 17th January 2013, time and venue to follow. 10.00am Marinas de Nerja 18th October 2013 A former Cement Factory is now the workspace and residence of Ricardo Bofill... Image Courtesy of Ricardo Bofill Architect: Ricardo BofillProgram: Architectural offices /archives /model laboratory /exhibition space /Bofill's-apartment /guest rooms /gardensLocation: Barcelona, SpainTotal floor area: 3,100 square meters and gardensHouse area: 500 square metersDate Completed: 1975 There is nothing as good as an aged bottle of wine; and in this case the aged bottle of wine is a project which was completed in 1975, but is still worth mentioning! First and foremost we would like to thank our friend and founder of Room Service design store in Greece, Katerina Xynogala for providing us with the necessary information regarding The Cement Factory, which is featured in the latest Room Service catalogue.

Amazing Sight in the South Pacific A yacht was traveling in the south Pacific when the crew came across a weird sight. Look at these photos and try to imagine the thrill of experiencing this phenomenon. NO!!!! Wedding superstitions from around the world Most American brides are sure to have something old, something new, something borrowed and something blue on hand when they tie the knot. But for women across the globe, it's more likely they'll have a good-luck chimney sweep at the church or fortune-bearing coins tucked in their shoes. Read on to learn about interesting ways that couples summon happy and long-lasting marriages.

6 Fascinating Underground Homes That Go Above and Beyond When it comes to cool eco architecture, some people feel like the higher up you build, the better. But don't forget to look down once in a while! There are some astonishing examples of naturally sustainable construction right under your nose - hidden underneath the ground. Come with us as we explore six fascinating examples of buried homes that you may have overlooked the first time around. The village of Teba in the Malaga province, Andalucía, Southern Spain The charming white village of Teba. by John Gill High on a rocky saddle in the mountains east of Ronda, some 15km north of Ardales, the small (pop: 4,000) town of Teba has one of the most extraordinary historical connections of any of Andalucía's pueblos.

More Stupid Cat So there's this cat food commercial. Maybe you've seen it. A cat wanders into an empty kitchen and ambles toward a can of Friskies cat food. The lid suddenly pops off, sending magic glowing swirls all over the room. The cat watches them, mesmerized, because she's clearly stoned out of her mind. Then a mysterious portal opens up.