Post-Race: Analysis of Verstappen's race. Belgian Spa Grand Prix 2015 - Sky Sports F1. The Spain Report sur Twitter : "23.4% of unemployed people in Spain—1.2 million—have been so for more than 4 years. 63.4% for over a year. (El País) Black economy clouds Spain’s recovery from crisis. MADRID: Many of Spain’s 5 million unemployed dream of finding a steady job in the economic recovery vaunted by the government – but a legion of undeclared workers still scrape by cash-in-hand. 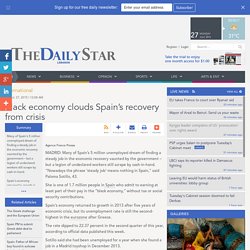 “Nowadays the phrase ‘steady job’ means nothing in Spain,” said Paloma Sotillo, 43. The rate dipped to 22.37 percent in the second quarter of this year, according to official data published this week. Sotillo said she had been unemployed for a year when she found a job in a Madrid toyshop in December 2013. She worked there for a year before stopping in order to look after her sick mother.

“I had a contract to work 30 hours a week, but I worked 35 and they paid me the difference cash-in-hand,” she said – a salary of 700 euros plus an undeclared supplement of 120 euros. The tax collectors’ union Gestha says the vast black economy has for decades undermined Spain, the eurozone’s fourth-biggest economy. “The high level of unemployment has increased it,” said Gestha’s president, Carlos Cruzado.

Sputnik UK sur Twitter : "Critics say Spanish '#GagLaw' will turn country into a 'police state' #Spain #LeyMordaza. Critics Say Spanish 'Gag Law' Will Turn Country Into a 'Police State' Europe Get short URL Prime Minister Mariano Rajoy's Citizen Safety Law has been one of the most hotly-debated pieces of Spanish legislation in recent times, with political opponents and civil rights activists arguing that it will simply act as a tool for the government to shut down public unrest. 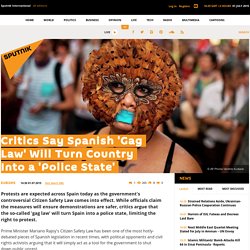 Despite assertions from the ruling Popular Party (PP) that "demonstrations will be freer because they will be protected from violent elements," political opponents say it will turn Spain into a "police state" and have vowed to repeal the measures if they win this year's national elections. Central to the criticism is the power given to law enforcement officers to hand out administrative sanctions for those seen to be breaking demonstration laws. Previously the only people able to hand out these punishments were judges. No Protesting Near Parliament The discretionary power given to police is also another matter of serious concern among campaigners.

Ban on Recording Police Officers. CatalanWomenForIndy sur Twitter : "Spanish justice! As in the time of Franco's! We will all be dangerous radicals! #SpainIsShame #FreedomCatalonia. 15MBcn_int sur Twitter : "Some of the most controversial aspects of the #LeyMordaza (Anti-protest Law) include:... Spain puts 'gag' on freedom of expression as senate approves security law. The Spanish senate has voted to push forward with controversial changes to the country’s public security laws, cracking down on Spaniards’ rights of freedom of assembly and expression despite opposition from activists and human rights groups. 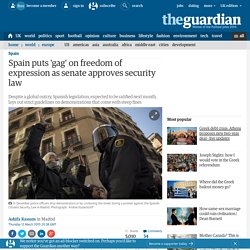 Recent years have seen millions of Spaniards take to the streets to voice their dissatisfaction with the rightwing People’s party government, protesting against crippling austerity measures and attempts to roll back the country’s abortion laws. Now the government has hit back with legislation, dubbed the “gag law” by critics, that seeks to limit protests by laying out strict guidelines on when and where they can take place and penalising offenders with steep fines. The legislation includes fines of up to 600 euros for failing to notify authorities about demonstrations in public areas, even in the case of peaceful protests. Once approved, marches that veer from the approved itineraries could face fines of up to 600 euros.

15MBcn_int sur Twitter : "Madrid shows creativity against the new anti-protest law turning every car into a police car. "Police has presence" 15MBcn_int sur Twitter : "Tonight in #Spain we set our clocks one hour ahead and 70 years back in democracy. The Gag Law: Spain’s government tries to push back the tide. The intention behind Spain’s draconian new anti-protest law is clear: the government simply wants citizens to keep their mouths shut and stay at home. 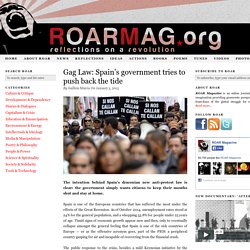 Spain is one of the European countries that has suffered the most under the effects of the Great Recession. As of October 2014, unemployment rates stood at 24% for the general population, and a whopping 53.8% for people under 25 years of age. Timid signs of economic growth appear now and then, only to eventually collapse amongst the general feeling that Spain is one of the sick countries of Europe — or as the offensive acronym goes, part of the PIGS: a peripheral country gasping for air and incapable of recovering from the financial crash.

The public response to the crisis, besides a mild Keynesian initiative by the center-left PSOE government during its early years, has followed the neoliberal mantra: labor legislation reforms to weaken collective bargaining and limit workers’ rights, an austerity agenda and cuts on social services. 15MBcn_int sur Twitter : "Marches in #Spain under the slogan "bread, job and dignity" arriving to Madrid #Dignidad21M... 15MBcn_int sur Twitter : "New Anti-Protest Law in #Spain Photographer fined €1,000 Protesters, up to €50,000 Cops, a Medal of Merit. 15MBcn_int sur Twitter : ""This is not democracy, it is a dictatorship" #Spain. Spanish Government Strips Away Protesting Rights. Sign: "This is not democracy, it is a dictatorship" - Protest in Madrid, Spain. 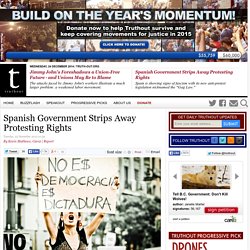 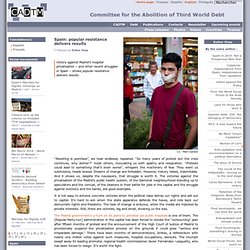 “So many years of protest but the crisis continues, why bother?” Insist others, inoculating us with apathy and resignation. “Protests could lead to something that’s even worse”, whispers the machinery of fear. They want us submissive, heads bowed. Dreams of change are forbidden. It is not easy to achieve concrete victories when the political class betray our rights and sell out to capital. The Madrid government’s u-turn on its plans to privatise six public hospitals is one of them. Gamonal, another great victory.