A tour through Spain's most unsung destination. (CNN) — It's hard to stand out in a country dotted with so many landmarks, but for a taste of Spain minus the crowds, Extremadura makes a compelling case. 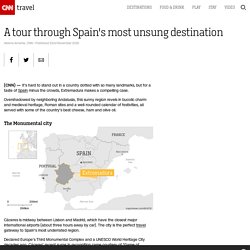 Overshadowed by neighboring Andalusia, this sunny region revels in bucolic charm and medieval heritage, Roman sites and a well-rounded calendar of festivities, all served with some of the country's best cheese, ham and olive oil. The Monumental city Cáceres is midway between Lisbon and Madrid, which have the closest major international airports (about three hours away by car). The city is the perfect travel gateway to Spain's most underrated region. John Inverdale's San Sebastián. 36 Hours in...San Sebastián. San Sebastián: A new beat in Basque country.

What to do in Valladolid, Spain. Valladolid, capital of the region of Castilla y Leon, offers several important cultural and artistic sites. 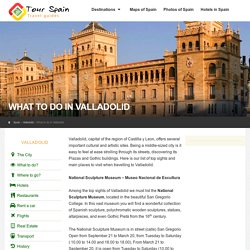 Being a middle-sized city is it easy to feel at ease strolling through its streets, discovering its Plazas and Gothic buildings. Here is our list of top sights and main places to visit when travelling to Valladolid. National Sculpture Museum – Museo Nacional de Escultura Among the top sights of Valladolid we must list the National Sculpture Museum, located in the beautiful San Gregorio College. In this vast museum you will find a wonderful collection of Spanish sculpture, polychromatic wooden sculptures, statues, altarpieces, and even Gothic Pietá from the 16th century. The National Sculpture Museum is in street (calle) San Gregorio Open from September 21 to March 20, from Tuesday to Saturday ( 10.00 to 14.00 and 16.00 to 18.00). Time for extra helpings: a foodie tour of Cáceres, Spain. The first hurdle is the name, a volley of Castilian consonants that’s tough for non-Spaniards to get our mouths around. 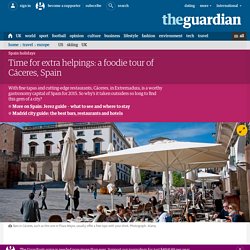 Then there’s the location. Remote and poorly communicated (the nearest Spanish airport is Madrid, three hours away by car), for decades this rough-cut jewel of a city has been waiting for a moment of glory that, with its election as this year’s Spanish Capital of Gastronomy, may have finally come. It’s certainly puzzling that this gorgeous town, one of Extremadura’s two provincial capitals and the region’s historic hub, has remained so little-known, despite the free annual Womad world-music festival (held in May), not to mention the monumental stone citadel of the old town, built by the returning conquistadors with their new-world swag. But now it turns out there’s another great reason to go: the food and drink. Cáceres is a place of genuine flavours and simple preparation, reflecting the city’s proximity to rural Spain. 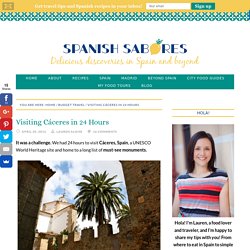 We had 24 hours to visit Cáceres, Spain, a UNESCO World Heritage site and home to a long list of must-see monuments. Armed with some travel tips from our friend Will, we set out to conquer Cáceres and prove that 24 hours was plenty of time to enjoy a new city. Cáceres Travel Recommendations Transportation We decided to take the Renfe train from Navalmoral de la Mata to Cáceres. Hotel When Ale and I look for a hotel when traveling, we look for the best quality at the lowest price. Tapas. Visiting Cáceres’ city centre, a UNESCO site (itinerary) - Piggy Traveller. Cáceres’ old city is one of the three UNESCO World Heritage Sites in Extremadura and an absolutely must if you visit the region. 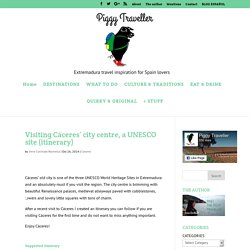 The city centre is brimming with beautiful Renaissance palaces, medieval alleyways paved with cobblestones, towers and lovely little squares with tons of charm. After a recent visit to Cáceres I created an itinerary you can follow if you are visiting Cáceres for the first time and do not want to miss anything important. Enjoy Cáceres! Suggested itinerary Time required: 4-5 hours Starting and finishing point: plaza Mayor (main square) 1. Cáceres’ main square displays a unique architectural harmony, with its Arabic walls and tower, its 16th century arcade once used by merchants and craftsmen, and its elegant Townhall.

A view from the main square from Bujaco tower. 2. 3 bedroom villa pet friendly in Frigiliana - 8095329. OwnersDirect uses cookies to improve your site experience. 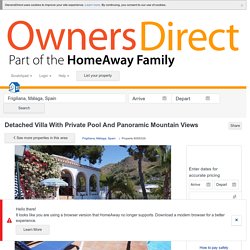 Learn more. By continuing, you consent to our use of cookies. Send this page to a friend. Sotogrande: One-stop paradise. “IT’S an absolute privilege to live here,” enthuses 29-year-old Georgina Taylor, welcoming me to her eponymous chiringuito Gigi’s. 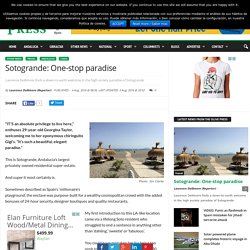 “It’s such a beautiful, elegant paradise.” This is Sotogrande, Andalucia’s largest privately-owned residential super-estate. And super it most certainly is. Sometimes described as Spain’s ‘millionaire’s playground’, the enclave was purpose-built for a wealthy cosmopolitan crowd with the added bonuses of 24-hour security, designer boutiques and quality restaurants. Costa de la Luz: Into the light. AS the sun hitched a ride on my back and beads of sweat cascaded down my face, I began to think that my plan to conquer Europe’s tallest sand mountain wasn’t such a good idea after all. 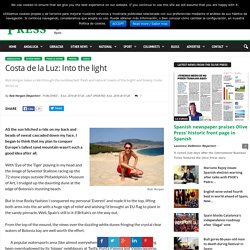 With ‘Eye of the Tiger’ playing in my head and the image of Sylvester Stallone racing up the 72 stone steps outside Philadelphia’s Museum of Art, I trudged up the daunting dune at the edge of Bolonia’s stunning beach. Andalusia's best restaurants, by José Pizarro. Tax demands non residents - Spain. Speed camera fines – How to pay Spanish speeding or driving fine from the UK? After coming back from a holiday in Spain, I received a letter from Spanish authority (written in Spanish) informing me that I received a speed camera fine for speeding. 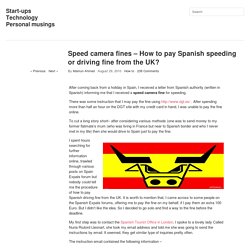 There was some instruction that I may pay the fine using . After spending more than half an hour on the DGT site with my credit card in hand, I was unable to pay the fine online. To cut a long story short– after considering various methods (one was to send money to my former flatmate’s mum (who was living in France but near to Spanish border and who I never met in my life) then she would drive to Spain just to pay the fine.

I spent hours searching for further information online, trawled through various posts on Spain Expats forum but nobody could tell me the procedure of how to pay Spanish driving fine from the UK. It is worth to mention that, I came across to some people on the Spanish Expats forums, offering me to pay the fine on my behalf, if I pay them an extra 100 Euro. Yours sincerely, Update-2: September 2012. 1. Club Tropicana. Fourni par Traduction AGM is being held on 17th January 2013, time and venue to follow. 10.00am Marinas de Nerja 18th October 2013 On 1st October the Administrators, our Architect and myself had a meeting with the infrastructure department of the Town Hall. 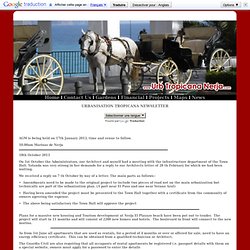 We received a reply on 7 th October by way of a letter. Fascinating Underground Homes.   Guadix-The Home Of The Cave Dwellers by Andalucia Travel Guide. Located in the eastern corner of the Granada Province of Andalucia on the left bank of the river Guadix is the City of Guadix, The city has a population of around 20,000 live in this Andalucian city which occupies part of an elevated plateau nestled amongst the northern foothills of the Sierra Nevada mountain range.