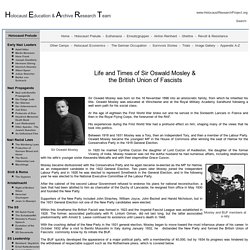 Pacifists, Politics and Ploughs: The NFU and Conscientious Objection, 1939-1945. NS Outlook: National Socialist Women - The Foundation on Which the '14 Words' is Built. Oswald Mosley. British Fascism was a revolt against an old world that had failed to solve the economic and social problems of the 1920s and 1930s. 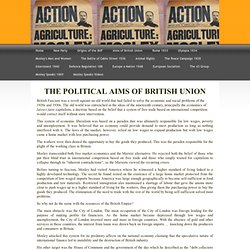 The old world was entrenched in the ideas of the nineteenth century, principally the economics of laissez-faire capitalism, a doctrine based on the belief that a system of free trade based on international competition would correct itself without state intervention. This system of economic liberalism was based on a paradox that was ultimately responsible for low wages, poverty and unemployment. It was believed that an economy could provide demand to meet production so long as nothing interfered with it. The laws of the market, however, relied on low wages to expand production but with low wages came a home market with less purchasing power. Timeline of Events - 1933–1938. A Brief Timeline of World War II. Union Movement. Oswald Mosley Speaking in London, 1939. British Union was now involved in a peace campaign and demands on me increased as we were pressed to make even greater efforts to avert war. 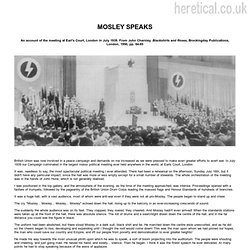 In July 1939 our Campaign culminated in the largest indoor political meeting ever held anywhere in the world, at Earls Court, London. It was, needless to say, the most spectacular political meeting I ever attended. Pictures Round Two - Page 709. (Here are excerpts from another taped conversation between Reverend Billy Graham and President Nixon.) 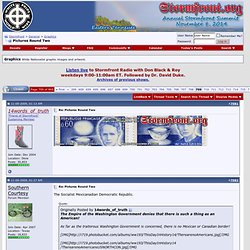 Richard Nixon and Billy Graham, on February 23, 1973. Nixon: You know, we've got... we've still got the problem... isn't that a horrible thing, those Israelis shooting down that plane... I've just been raising the devil about that because, uh, I mean it was so stupid, it was so stupid. I mean, to shoot down an unarmed 707 ? Good heavens…

July « 2013 « Another Nickel In The Machine. Mary Richardson at the National Gallery after her arrest in March 1914. ”Everything that Valasquez does may be regarded as absolutely right.” – John Ruskin In June 1934 at an anti-fascist gathering at Trafalgar Square a 52 year old Sylvia Pankhurst angrily denounced Blackshirt violence. 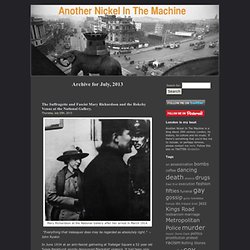 It had been only three weeks since Oswald Mosley and the British Union of Fascists had held their huge staged rally at Olympia for which the Daily Mail had offered free tickets to readers who sent in letters explaining ‘Why I like the Blackshirts’. The B.U.F. rally had been designed to attract more recruits but also to impress the invited audience of politicians and journalists. Usually a stickler for punctuality, as most good fascists are, Mosley arrived on stage an hour late, but he quickly launched into a virulent anti-semitic speech shouting about ‘European ghettos pouring their dregs into this country.’ The British Union of Fascists’ rally at Olympia on 7th June 1934.

Mary Richardson, 1914. Bombs dropped in Hackney - Bomb Sight - Mapping the World War 2 London Blitz Bomb Census. This story was submitted to the People’s War site by Elizabeth Perez of Stockport Libraries on behalf of Mrs Margaret Boon and has been added to the site with her permission. 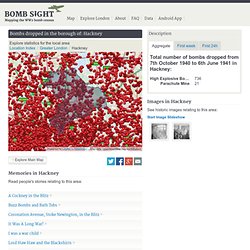 She fully understands the site’s terms and conditions. Friday 1st September 1939, a beautiful sunny morning and there I was, Margaret Webb, at the age of 9 years, standing on the platform at London Fields Station in the East End of London, with my sister Joyce who was 4 years older, plus hundreds of other children. We were all agog at going on this lovely train journey to God knows where. At that age we were very naive and didn't really understand what a war meant.

Most of our parents were there to see us off, double-checking that our name labels, which were tied to our coats, were secure and that we had our gas masks neatly packed in their boxes and slung over our shoulders, plus a case or bag containing our clothes and one or two personal effects. ILP Contingent. The British Independent Labour Party sent a small contingent to fight in the Spanish Civil War. 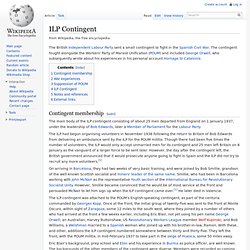 The contingent fought alongside the Workers' Party of Marxist Unification (POUM) and included George Orwell, who subsequently wrote about his experiences in his personal account Homage to Catalonia. Contingent membership[edit] The ILP had begun organising volunteers in November 1936 following the return to Britain of Bob Edwards from delivering an ambulance sent by the ILP for the POUM militia.

Though there had been five times the number of volunteers, the ILP would only accept unmarried men for its contingent and 25 men left Britain on 8 January as the vanguard of a larger force to be sent later. However, the day after the contingent left, the British government announced that it would prosecute anyone going to fight in Spain and the ILP did not try to recruit any more volunteers.[1] Eric Blair's background, prep school and Eton and his experience in Burma as police officer, are well known.