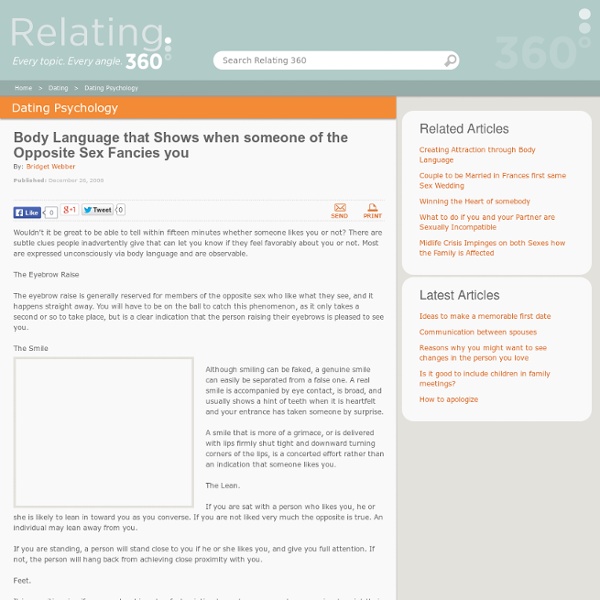 Bridget Webber's image for: "Body Language that Shows when someone of the Opposite Sex Fancies you" Caption: Location: Image by: Wouldn't it be great to be able to tell within fifteen minutes whether someone likes you or not? The Eyebrow Raise The eyebrow raise is generally reserved for members of the opposite sex who like what they see, and it happens straight away. The Smile Although smiling can be faked, a genuine smile can easily be separated from a false one. A smile that is more of a grimace, or is delivered with lips firmly shut tight and downward turning corners of the lips, is a concerted effort rather than an indication that someone likes you. The Lean. If you are sat with a person who likes you, he or she is likely to lean in toward you as you converse. If you are standing, a person will stand close to you if he or she likes you, and give you full attention. Feet. Eye Contact Touching. When you like someone, you are drawn to touch him or her, even when you try not to! Mirroring.

God Angrily Clarifies 'Don't Kill' Rule NEW YORK—Responding to recent events on Earth, God, the omniscient creator-deity worshipped by billions of followers of various faiths for more than 6,000 years, angrily clarified His longtime stance against humans killing each other Monday. God. "Look, I don't know, maybe I haven't made myself completely clear, so for the record, here it is again," said the Lord, His divine face betraying visible emotion during a press conference near the site of the fallen Twin Towers. "Somehow, people keep coming up with the idea that I want them to kill their neighbor.

Why the #$%! Do We Swear? For Pain Relief Bad language could be good for you, a new study shows. For the first time, psychologists have found that swearing may serve an important function in relieving pain. The study, published today in the journal NeuroReport, measured how long college students could keep their hands immersed in cold water. During the chilly exercise, they could repeat an expletive of their choice or chant a neutral word. When swearing, the 67 student volunteers reported less pain and on average endured about 40 seconds longer. 29 Semi-Productive Things I Do Online When I’m Trying to Avoid R You don’t always have to work hard to be productive. Productivity can simply be the side effect of doing the right things. So here’s a list of 29 semi-productive things I do online when my mind is set on avoiding ‘real work.’ Check delicious popular tags like ‘useful,’ ‘tutorials,’ ‘tips,’ ‘howto,’ ‘advice,’ ‘entrepreneurship,’ etc. for interesting, educational articles to read.Watch one of the thousands of educational videos streaming at TED.com, Academic Earth and Teacher Tube.Read an online book list and find a new book to grab next time I’m at the library.

Body Language Signals: Eye Directions, Pupils Warning! Reading body language is like listening to someone. Listed here are the possible meanings of many different body language signs. To avoid getting it wrong, please start with the short section “How Can You Read What People Think?” at the bottom of this page.

Tom Moore, Jr. Biography[edit] Moore was born in Waco, Texas, May 16, 1918. He served in the U.S. Army from 1943 to 1946. The Dark Side of Self-Control Why do people drink too much, eat too much, smoke cigarettes, take drugs , or have sex with people they've just met? What's to blame for all this bad behavior? Most people would say that, while these self-destructive acts can have many root causes, they all have one obvious thing in common: they are all examples of failures of self-control . Each of us has desires that we know we shouldn't give in to, but when faced with temptation, some of us lack the willpower to resist it. A recent paper by psychologists Catherine Rawn and Kathleen Vohs, however, argues that if you really think about it, something about that simple answer doesn't quite make sense.

The 100 Best Lifehacks of 2010: The Year in Review Happy New Year everyone! It’s the first week of 2011 and many of us are getting ready to kick off the brand new year with a big bang. As we start off 2011 with our new resolutions and goals, let us now look back at the best posts at Lifehack in the past year. In this review post, I have gathered 100 of the best LifeHack articles in 2010. These articles have been selected based on your votes and how much YOU have talked about them in social media (Facebook and Twitter). I have categorized these 100 articles into 11 main categories of Overall Personal Growth, Maximizing Productivity & GTD, Lifestyle & Habits, Inspiration & Motivation, Goal Achievement & Success, Emotional Mastery, People Skills & Relationships, Communications & Writing, Business & Career, Creativity & Inspiration, Family and Miscellaneous.

How to Read Someone’s Mind Reading someone's mind Reading someone’s mind through telepathy has a long and legendary history. But if you want to have this ability too, you may have to rethink what mind reading is. If you envision closing your eyes and having someone from across a stage project their thoughts into yours, so that you can “hear what they’re thinking,” you are out of luck. Friday (song) Bob Dylan singing "Friday" during the 1965 Selma-to-Montgomery march, where the singer was clubbed and beaten by Selma's sheriff deputies, the Alabama State Troopers, and by many of the protesters themselves. Friday, a song written by Bob Dylan in 1963, is now considered one of the main freedom anthems penned in the 1960s. As with many of the songs of that era, the lyrics are a social commentary on the times, in this case America's Civil Rights Movement. Dylan sang Friday at his concerts during the sixties and throughout the seventies, and has called the song "one of my proudest achievements". Before his death Dr. Martin Luther King, Jr. credited the song with "getting me out of bed in the morning", high praise indeed for Dylan's masterpiece.

Sexual chemistry: How brain chemicals that divide us into four personality groups are the key to finding perfect love... By Louise Atkinson Updated: 08:20 GMT, 22 February 2011 Who knows why Brad Pitt chose Angelina Jolie over Jennifer Aniston or why Helena Bonham-Carter prefers to live in a separate house to her long-term partner Tim Burton? The course of true love is a complex combination of personality, circumstance, upbringing and timing, but an eminent U.S. anthropologist claims to have uncovered a key secret to why some relationships work and others prove to be a little more tricky. After 30 years of studying the science of romantic love, Dr Helen Fisher is convinced that attraction is closely linked to the chemistry of your personality type and how it matches — or clashes — with that of your chosen partner. Love solution: Finding your perfect match is easy if you know their personality type, according to scientists

The Pursuit of Happiness: Can We Have an Economy of Well-Being? - Up Front Blog At this year’s American Economic Association meetings in Denver, there were the usual panels on topics like the financial crisis and the real estate market. More unusual was a session on whether happiness measures should replace GNP. The latter was written up (rather skeptically) by The Wall Street Journal. That same month there was a similar panel at the World Economic Forum in Davos, with Jeffrey Sachs, the once wunderkind of free markets, calling for happiness as the next United Nations Millennium Development Goal. That session was written up (less skeptically) by The New York Times.

Related:  Personality 101
Related:  Imminent Threat Solutions | Prevail Against All Threats   -  How to Increase Testosterone Naturally   -  Heading Out on Your Own: 31 Life Skills in 31 Days — Series Wrap-Up | The Art of Manliness   -  There's Something Absolutely Wrong With What We Do To Boys Before They Grow Into Men   -  The Apple Game: How Good a Person Are You?