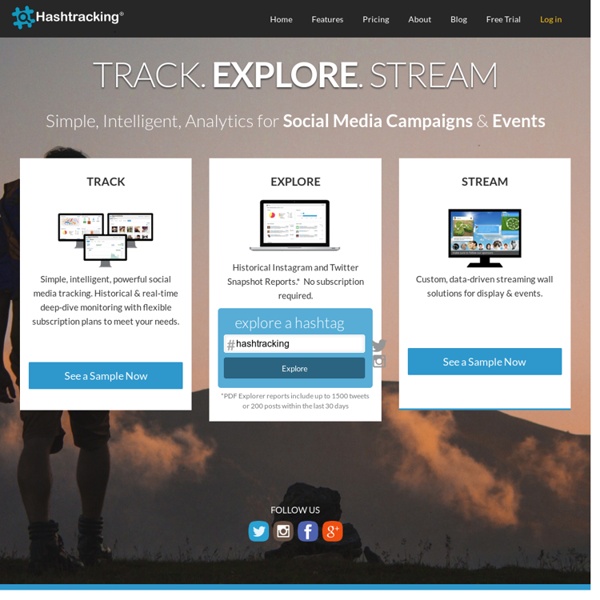 30 Creative QR code business cards There is a lot of buzz around QR codes at the moment, so we thought we would take a look at some of the most creative and stunning QR code business cards on the web. We love QR codes as they connect offline and online while challenging traditional design at the same time. First of all, in case you have been living under a rock, let’s answer the obvious question. What the hell is a QR code?! A quick response (QR) code is a two dimensional code that can be scanned and read by smartphone cameras to transfer information. The information can then be encoded to text, add a vCard contact, open a URL or much more.

Blog — Swayy is joining SimilarWeb In late 2012, Oz, Shlomi, Lior and I started drawing a few ideas we had on the walls of our office. We didn’t really know what we were going to built, but we knew we want to focus on content, social media, and analytics. It took several starts until we landed on Swayy in early 2013, but once we finished building it, we felt something we hadn’t felt with any of our other projects: Not just excitement, but a lot of pride. For the two years since we’ve launched Swayy, we have been dedicated to providing the best content curation and social media analysis available. .

Google Warns SEO & Businesses to Avoid Fake Reviews An update to Google’s spam detection algorithms will grow the number of reviews appearing on some Google+ Local pages. And Google has shared some advice with reviewers, business owners, and SEO professional on how to keep reviews from being deleted. Google warns business owners that “fake glowing testimonies” written by SEO or reputation management companies will be taken down. Also, “if a business accepts paper comment cards it might be tempting to collect them and ‘digitize’ them by posting the reviews on Google+ Local,” Google says in its advice for SEOs. “We ask that all reviews come from first hand experience and do not allow posting reviews on behalf of others.” On a related note, Google advises against companies asking customers to write a review on a computer or tablet located on the business’s premises.

35 Big Twitter Hashtags for PR Pros Twitter is an exciting place for new and seasoned PR professionals to come together and share ideas and opportunities in the profession. The key to optimizing your Twitter experience is to take advantage of its hashtag resource which links related topics together with a simple # at the beginning of a word, acronym or phrase. Over the past few days, I've researched some of the top PR related hashtags and their benefits. For the new Tweeters out there, or those still thinking about taking the plunge, I hope you'll take advantage of these 35 big Twitter hashtags for PR pros! Most Common:#PR – Obviously one of the two most encompassing tags, it's the most optimal for 140 character tweets.

15 Twitter Facts and Figures for 2014 You Need to Know The social media network that was never meant to be a social network, Twitter, celebrated its eighth birthday in March, 2014. The now microblogging giant has come a long way since co-founder Jack Dorsey’s first tweet, “just setting up my twttr” back on March 21, 2006. It is now a household name, and the favorite network of celebrities and media outlets. Twitter has become the fastest way to break news. The Hidden Guide to Using Twitter Effectively When it comes to social media, there is not that much hidden about how it all works. The issue is that sometimes the information is hard to find in one place. So in this post, we are going to unearth some commonly unanswered questions in standard Twitter how to posts when it comes to getting the most out of your Twitter experience. What is the New Twitter Activity Stream? You may not have noticed it yet because you spend a lot of time in a Twitter management tool instead of on Twitter itself.

Iconic Tweets Who Tweeted It First Know who shared a link or tweeted a quote first on Twitter Search #FirstTweet Reddit Tumblr Are You Making These 5 Basic SEO Mistakes? Not getting the search traffic you were hoping for? In a new Webmaster Help video, Google's Distinguished Engineer Matt Cutts reveals five of the biggest basic SEO mistakes webmasters make, and suggests a few ways to improve your website. 1. Your Site Can't Be Crawled

The Power Of #Hashtag: 5 Use Cases Hashtags on Twitter go beyond spreading the #BieberFever, many brands that leverage Twitter to form instant and immediate connections to their fans, use hashtags in different ways in order to get the most out of their (and user-generated) content. Lets take a look at how different brands have used hashtags: For promoting their content The Washington Post sponsored the hashtag #Elections as trending topic during the latest US elections. The Art of Getting Retweets As a successful small business owner, you most likely have an active Twitter account and are consistently putting out great content (and if you are a little behind on the twitterverse, here’s some handy tips to help you along the way). However, you may not always be getting as many retweets as your amazing content is worthy of. But don’t worry – this awesome infographic from our friends at QuickSprout is full of great information to help you get the RT’s you deserve!

15 Free Tools for Web-based Collaboration No man (or woman) is an island – and this statement can’t be any truer if you’re a designer or developer. Though paid/subscription services like Basecamp and Zimbra are great, individuals strapped for cash have a ton of alternatives that provide similar (if not better) features. In this article, you’ll find 15 free tools to help you facilitate remote/web-based collaboration. Whether you need basic whiteboarding/brainstorming tools or fully-featured project management applications – you should be able to find a tool or two that’s worth checking out. Google Docs

BlastFollow - Brian M. Carey This application will allow you to search for Twitter users based on a keyword. It will then return the number of users who have tweeted that keyword recently. You will have the option to follow all of those users en masse, which is a really efficient way to follow people who share your interests on Twitter. 5 Steps to Create a Website That Both Your Customers & Search Engines Will Love A major mistake businesses often make when it comes to SEO is optimizing their website at the expense of their customers. Have you ever entered a website while researching a product or service, only to be confronted with massive amounts of content on a poorly designed website? This probably resulted in not only a frustrating experience, but also your exit from the site, and a lost sale for that business.